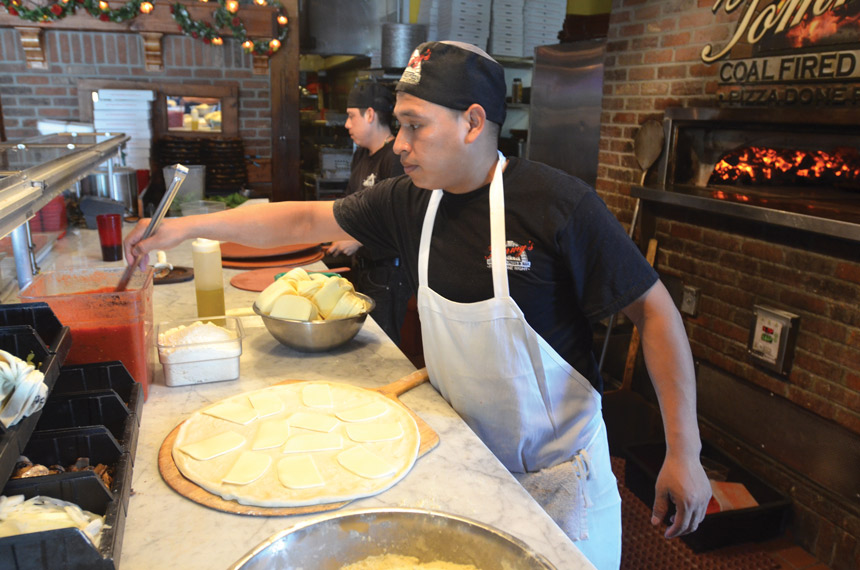 Q: Does the temperature of the water matter that much when making pizza dough?

For example, higher dough temperatures allow for faster fermentation rates. As the dough ferments faster, it consumes more nutrient (sugar) and generates more acid (acetic, lactic and propionic). The ultimate lack of nutrient and excess of acid work to significantly slow or halt yeast activity after several hours in a typical pizza dough formula. Cooler dough temperatures will slow the rate of fermentation, decreasing acid formation and nutrient metabolism, allowing for a longer sustained fermentation period for the dough. Also, from a mechanical point, doughs having a lower temperature are easier and faster to cool when taken to the cooler. Doughs that are too warm may be difficult to cool, efficiently resulting in over-fermented or “blown” doughs. So, as you can see, if the dough temperature is not controlled, your entire dough management procedure can become unraveled overnight, resulting in lost doughs (or, at best, inconsistent dough performance or finished product quality characteristics).

The recommendation for activating an active dry yeast is to use a water temp between 100 F to 105 F. And that’s pretty important. In fact, the water temperature used to activate any type of dry yeast is really pretty important. In all cases, active dry yeast must be hydrated before it can be added to the dough. And, in some cases, instant dry yeast must also be hydrated. Take note that the correct water temperature to use when hydrating IDY is 95 F. If the water temperature is too hot the yeast cells can be heat/thermal damaged. But if the water is too cold, you stand the risk of allowing some of the plasma material contained within the yeast cell(s) to leach out during the hydration process. This material, when removed from the cell, can result in the development of an unusually soft (or, in some cases, sticky dough consistency and extensive damage to the yeast cells from which the material was removed). All in all, good things do not happen when dry yeast is allowed to hydrate in water at a temperature other than that which is recommended by the manufacturer.

Also, while we’re on the topic of hydrating dry yeast, keep in mind that when the directions say to hydrate the yeast in water at say, 100 to 105 F, only a small quantity of the total water needs to be at that temperature, only about five times the weight of the yeast. The rest of the water should be at a temperature that will give you a finished dough within the desired or targeted temperature range.

Q: Why is my dough sticking to my peel?

A: There are a couple of things that might cause the dough to stick to your peel. If you are using malt in your dough, make doubly sure that it is non-diastatic (non-enzyme active) malt. If the malt is diastatic malt (enzyme active), it will convert starch in the flour to sugars, making the dough sticky or tacky to the point where it will stick to almost any surface it comes into contact with, including a prep peel. If the dough is over absorbed (contains too much water) it may feel clammy or even exhibit a slight tackiness when touched. Over absorbed dough tends to be difficult to work with as the dough is just too extensible and is easily over stretched during the forming operation. While some of the traditional doughs are fairly high in absorption and difficult to handle during forming, they can still be peeled into the oven without much of a problem if they are well floured for ease of handling, and either fine cornmeal, or semolina flour is used as the peel dust to aid in sliding the prepared dough skin off of the peel. Be sure to use a wood or wood laminate peel for your prep peel.

When a wood or wood laminate is used as a prep peel, the wood will have some capacity to absorb moisture, thus reducing the potential for stickiness. Because it is harder to form condensation between a wood peel and the dough skin, the issue of condensation is all but totally eliminated. Even with the best dough and wood prep peels, it is still possible for dough to stick to the peel if too much time is taken in prepping the dough skin.

Even when a novice is prepping a dough skin and taking their own sweet time about it, there is still only a slight chance that the dough will stick to the peel. But where the problem arises is when the prepped or partially prepped dough skin is allowed to remain on the prep peel while they do something else, like wash and cut a topping for the pizza or stop to answer the phone, etc.

The solution to this is easy to address –– just make sure once the dough is placed on the peel it is dressed and peeled into the oven without interruption. Of course, a good peel dust doesn’t hurt either.