With 130 Domino’s Pizza outlets under his charge, Glenn Mueller signs plenty of checks for delivery drivers. The head of Gulfport, Mississippi- based RPM Pizza, Mueller, a 30-year veteran of the pizza world, has watched competitors throughout the restaurant landscape rush into the delivery business with little understanding of its nuance and complexities.

And the delivery business, Mueller contends, is nothing but nuance and complexity.

While running delivery service looks easy to many, it remains a convoluted array of local, state and federal directives, including how drivers — who can be employees paid an hourly rate or tip-credited wages — are compensated, as well as how they are reimbursed for use of their own vehicle.

Adrian Sawyer, a San Francisco- based attorney with Kerr & Wagstaffe LLP who defends nationwide employment class actions, says there are various pitfalls to employing delivery drivers, including the requirement that employers report tips — a process simplified given the rise of credit card purchases and online ordering — as well as regulations in some states that prohibit an employer from applying tips toward a driver’s wage.

Further problems can arise if operations pay their drivers under the table or compensate drivers as independent contractors.

“You have to be careful drivers are being paid the appropriate amount or you can end up violating federal labor laws,” Sawyer says. “The balance here is complying with the law, which imposes significant burdens and requires attention to detail that isn’t readily apparent to everyone, while simultaneously controlling expenses and running a profitable business.”

Under federal law, restaurants are required to pay delivery drivers $2.13 per hour if they utilize the tip credit, though gratuities must push each driver over the $7.25 federal minimum wage. In the event that the $7.25 hourly rate is not met on a workweek basis, an employer must make up the difference.

For instance, an employer using the federal tip-credit rate of $2.13 per hour would pay his driver $31.95 for a 15-hour workweek; yet, that driver’s tips for the week would need to total $76.80 or more to ensure that the operator was meeting the minimum wage requirements ($7.25/hour) of the Fair Labor Standards Act (FLSA).

“If that driver only received $70 in tips, then the operator would need to add $6.80 to the pay period to meet federal requirements,”American Payroll Association (APA) Director of education and Training Jim Medlock explains, adding that many computerized payroll systems compute weekly minimums at the federal and state level to secure compliance.

In addition, Medlock reminds that drivers working more than 40 hours in a given workweek would also need to be compensated at the standard overtime rate of time-and-a-half.

Beyond driver wages and tips, there also remains the issue of reimbursing drivers for use of their own personal vehicles, a particularly thorny subject as fuel costs rise.

Operators can reimburse delivery drivers in one of three ways: mileage logs; a flat-rate policy; or to set the base pay high enough that the minimum wage will be covered even as expenses are accounted for on the paycheck.

According to the internal Revenue Service, the standard rate of driver reimbursement is 55 cents per mile, a tally that addresses fuel, repairs, insurance and automobile depreciation.

Mueller’s RPM Pizza reimburses its drivers by the mile and shifts the number on a weekly basis according to local gas prices from AAA and a third-party agency familiar with local mileage reimbursement rates for food delivery. he says clarity and transparency is key.

“You can’t just be tossing out arbitrary numbers,” Mueller says, adding that state restaurant associations can often direct operators to sound advice on local reimbursement rates. “Our drivers want to know how mileage rates are set and how they will be reimbursed… and appreciate that we’re doing our best to be fair.”

Rather than logging miles and compensating at a per mile rate, operators might set a flat rate for mileage reimbursement that considers the typical distance a driver travels for a delivery and the average tip he receives. A flat rate, Sawyer says, offers operators predictability and maintains fairness to employees.

“Involve drivers in this process, as they know how far they’re going and what they typically get for tips,” Sawyers says.

Furthermore, Sawyer suggests operators also have a policy in place for additional “unexpected” expenses, such as a flat tires or lockouts. While smaller operations might deal with unforeseen situations on an as- needed basis, larger chains might have a defined policy in an employee handbook.

“The idea here is clarity and predictability,” Sawyer says, noting that unpaid driver expenses could spark problems with FLSA compliance.

Finally, there is the lingering issue of delivery fees, which customers can easily — and mistakenly — confuse with a driver tip and, in doing so, bring unnecessary pressure upon operators. Sawyer suggests all pizzerias have a clear message on their menus, Web site, and receipt that details the difference between the delivery fee and the driver’s gratuity.

As one example, delivery kingpin Domino’s shares this message on its homepage: “Any Delivery Charge is not a tip paid to your driver. Please reward your driver for awesomeness.” 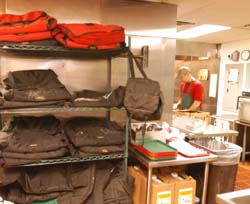 “Our drivers aren’t just drivers and we train them accordingly,” say Borriello Brothers Operations Specialist Adam Rickett. “They’re able to prep food, jump on the register, take phone orders, and so on.”

Rickett says cross-trained drivers builds operational cohesiveness and enhances customer service. For those benefits, however, such job swapping throughout a shift can also leave an operation susceptible to FLSA violations as the tip credit can only be applied to certain staff positions.

To avoid any errors, Borriello Brothers requires its staff to clock in and out for individual jobs. Though sometimes tedious, the APA’s Jim Medlock calls that practice the “safest way” to ensure appropriate employee compensation.

“In clocking in and out, operators know how many hours a staff member worked in different positions of the restaurant that have different pay rates,” Medlock says.