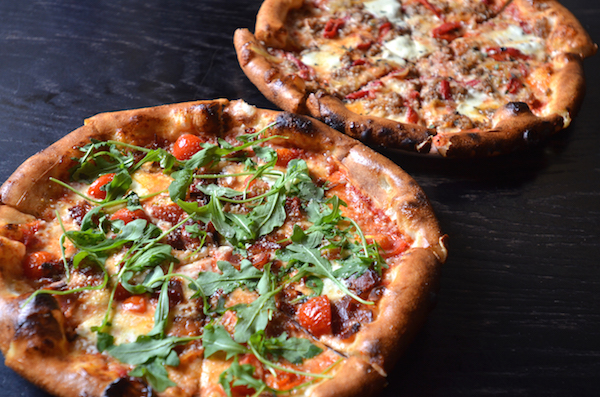 More pizza makers liberally use the word, “artisan,” to describe their pies, which presents a real dilemma for those offering the real deal. You may have the most authentic artisan pizza in town, but how do you stand out? Sure, your food quality should speak for itself, but you have to take things one step further.

First, project a consistent image, or brand, so people will choose you first.

The folks at Pyro’s Fire Fresh Pizza in Memphis, Tennessee, know all about that. Their “brand” revolves around the customers’ palates, says co-owner Kirk Cotham. Diners crave Pyro’s, because they customize their own pizza –– made with fresh toppings, sauces and cheese –– before it’s baked in a homey wood-fired oven. “We believe everyone should get their pizza the way they want it,” Cotham says.

“We don’t ask a group on social media to ‘help us get up to 100 customers,’” he says. “It’s about interaction with guests and fans so that when they go out to lunch, they’ll automatically think, ‘Pyro’s,’” he says.

Your artisan pizza brand can attract the same recognition. Here’s how, with tips from Cotham and Gannon Mendez, owner of The Saucee Sicilian in Oklahoma City, Oklahoma:

• Emphasize imagery. “Imagery” covers everything from photographs on Instagram, to a recognizable logo, to even the font style on your Web site.

Don’t underestimate the power of social media photo sharing, Cotham says. “The fact is that when we have images and can see the ingredients, it’s more powerful than the word, ‘artisan,’ or ‘custom,’” he says.

When someone sees a photo of an appetizing pie, they will invariably respond or tweet back, “Where did you get that?” The result is that you don’t even have to work hard to brand yourself as “artisan.” Your customers do it for you, Cotham says.

Logos and Web site style also send strong silent brand messages. The Saucee Sicilian’s logo is that of a “cartooned” Mendez with three arms — one holding a ladle, one holding a wooden spoon and one holding a pizza slice. It adorns his Web site, T-shirts and the side of his food truck. The ladle and spoon represent the time needed to create tomato sauce for pizza and meatballs — two days. If customers wear the T-shirt to his pizza truck, they receive $2 off each pizza, plus a free dessert.

The Saucee Sicilian also heavily emphasizes Mendez’s grandmother’s recipes to differentiate its pizza from competitors. As a result, its Web site is designed to look “old world.” The colors and font style have all been carefully thought out to reflect “old-fashioned” branding.

• Build on the imagery using words. The Saucee Sicilian’s image is linked to Grandmother Lena’s secret recipe. So the business slogan is “Getting sauced since 1903.” Mendez also uses Twitter hashtags like #TheSauceeSicilian and #WoodFiredPizza, to generate recognition for the brand and discussion.

And get verbal. When someone orders meatballs drenched in the sauce, everyone on Mendez’s truck yells, “Saucee Sicilian!” When the order comes through the window for the person to pick up, they yell that again. The result: People wonder what it is, so they talk about it in line. “If we have one order come through, then 10 more will order it right after that. It’s guaranteed we’ll have a run on it,” Mendez says.

• Get personal. The more you connect with the customer personally, the more they’ll remember your brand name, Cotham says. Pyro’s encourages staff to try to remember regular customers’ favorite pizzas. They also encourage people to share Instagram photos of their “creations.”

“No one leaves a traditional pizza place and says, ‘This is MY pizza.’ But here, they do. They actually tweet, ‘This is MINE.’ And what they mean by that is, ‘I made it,’” Cotham says.

Artisan pizza may not be the usual first choice for picky eaters. But because of Pyro’s branding its pies as customizable, kids love going there. “Parents are like, ‘All they talk about is Pyro’s,’” Cotham says.

“We’re also big on names. A lot of adults don’t call kids by their names. But by using their name, it has made them feel part of the process. And face it, a lot of times they don’t have the same choices we do and are not really treated the same. The kids can put whatever on it that they want, and they’re not ordering off of a kids’ menu. To them, it feels like empowerment,” he says.

Evoke a memory. Mendez features old black-and-white photos of his Grandmother Lena on his Web site and also places them around his food truck. She died at age 107 and at one point was the oldest person in Colorado. “People will ask me, ‘Who’s that?’ I reply, ‘That’s the inspiration. These are her recipes. She is our inspiration –– my Nonna –– and who I cook for,” Mendez says.

His mother also plays a huge role in making people feel like they’re getting a home-cooked meal. “Mom is the first person you see. She loves to talk about the meatballs and that the sauce takes two days to make. People ask how long she’s been making the next batch when they know that. Then they bring more people into the discussion, like their friends. The customers help us with the branding,” he says.

Brand Yourself with the Kids

Kids have a huge role in determining where a family will eat, so make sure your brand resonates with them. Pyro’s hired marketing firm Simmer Group to create a “Back to School” night for its youngest customers in August.

The company engaged the Pyro’s audience by creating fun visual assets that incorporate the Pyro’s brand and food into various school subjects and well-known historical references. From basic arithmetic math involving the counting of pizza pies to challenging the audience to identify the artist of Pyro’s Mona Lisa, the content further developed Pyro’s as a relevant and interesting brand within their geographic region.