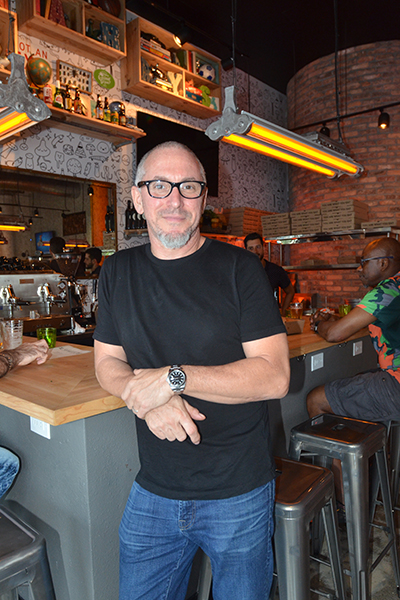 Harry’s Pizzeria sets sights on the growth in South Florida

Four-year-old Harry’s Pizzeria has become synonymous with the vibrant food scene in Miami, Florida. Pizza Today’s visit last fall coincided with an exciting moment in the pizzeria’s history with the opening of a second location. Chef owner Michael Schwartz gave us a look inside the one-week-old Coconut Grove location.

The tour began at the door. All eyes go to the open pizza line and wood-burning oven with brick surround behind an ample and stylish bar. The high-volume, 31-square-foot hearth was filled with pizzas in the mid-afternoon. Chalkboards highlight draft specials and daily menu specials. Whimsical, black-and-white food graphics commissioned by a local artists’ group blanket one wall. A “flying V” of stuffed ducks adorn another wall. Floor-to-ceiling windows basks the restaurant in natural light. Industrial glowing yellow light fixtures are actually fluorescent lights used in auto body paint shops, Schwartz reveals. Floridian-style wooden chairs, green banquettes and white marble two-tops are distributed on a mismatch of concrete and terracotta tiles. The elements come together to create eclectic, hip design. And that modern rustic interior is exactly what Schwartz was shooting for. Coconut Grove’s layout and feel is cohesive with the original Harry’s in the Design District. The new location has a larger footprint in the common and bar areas and back of house to accommodate higher output.

The Harry’s Pizzeria concept is the brainchild of Schwartz, a James Beard Award-winning chef. He has dotted the city with his unique cuisine, including his flagship restaurant, Michael’s Genuine, which ignited the Harry’s pizza concept. He formed The Genuine Hospitality Group, operating a handful of Schwartz brands in South Florida, Grand Cayman and on board a select Royal Carribean line.

“I really thought it was an opportunity to make something like Michael’s Genuine with pizza being the focus, more approachable to everyday people and families and younger kids that didn’t have the budget to go to a place like Michael’s Genuine,” Schwartz says. “So it gives me all of that creative outlet while capturing a whole different demographic of Millennials, who want to eat out all of the time and are sophisticated enough to know the difference in quality.”

Among Miami’s leading restaurateurs, Schwartz wasn’t quick to pull the trigger on a second Harry’s. “We didn’t rush because we had to really figure it out,” he says. “We came from the restaurant mentality of buying quality ingredients and so it took us awhile a) to get costs in line and b) to get it to a place where we were ready to say ‘OK, we can do this. Let’s do another one, let alone let’s do a bunch of them.’”

With a four-mouth construction delay, Schwartz and his team built up quite the calculated anticipation for the opening. Coconut Grove differs from the original Design District location. The original Harry’s borders a high-end, luxury shopping area and draws a cross-cultural clientele.

First impression, Schwartz says, was key to entering the tightknit Coconut Grove neighborhood of young families, Millennials and businesses. Fitting into the neighborhood required a lot of frontend engagement before Harry’s opened its doors, demonstrating the pizzeria’s neighborhood focus.

Schwartz and Jackie Sayet, brand director at The Genuine Hospitality Group, laid the groundwork by reaching out to community development leaders, chefs, business owners, residents, Harry’s advocates and the Business Improvement District in Coconut Grove. “It was important to engage with them and listen,” Sayet says.

Harry’s also rolled out its mobile oven to give Coconut Grove a taste of its menu offerings during construction. A focused social media campaign was also key to sharing not only the amazing food but the story and narrative behind Harry’s, Sayet says.

The strategy paid off when Harry’s opened in October. Even with the extra months, Schwartz says, “We could never have been ready for last week. We were completely overwhelmed with the volume.”

On Pizza Today’s visit during week two, the staff has settled into its new digs. Design District staff migrated over to help out with the launch. Schwartz even manned the oven the first week but now his new crew has taken over, allowing the leadership staff to step back.

The new location offers its own unique challenges. “Everything is different — bigger oven, bigger mixer and it’s a spiral mixer, different walk-in, different conditions,” Schwartz says, adding that each store handles its own made-from-scratch products. “For a week in, we’ve found a groove.”

With all the excitement of a grand opening, Schwartz says, it’s vital to stay focused on the Harry’s brand and its core philosophy of genuine cooking in a hip, casual setting. “There are certainly Italian influences that drive the menu but it’s an American pizzeria and this notion of getting people back in a restaurant to eat pizza, not out of a box,” he says.

Staying true to Harry’s, Schwartz says, also means to “not introduce sandwiches and not introduce pasta and not to try to be all things to all people.”

Harry’s is a pizzeria, first-and-foremost, but that’s not to say the snacks, daily entrée specials and salads are not star attractions. The Warm Brussels Sprouts & Stracciatella has received citywide accolades as one of Miami’s best dishes, and with good reason. The salad incorporates pears, pistachios, herbs and a creamy parmigiano dressing ($12).

Harry’s menus the original 11 pizzas Schwartz debuted when he opened the Design District pizzeria four years ago. A bit of a stab in the dark, Schwartz says, but they nailed it. It taps into Schwartz’s culinary prowess — “combinations that I thought would be interesting but not too off-putting or complicated or hard to understand,” he says.

Simple yet engaging, well-balanced toppings shine through. The popular Short Rib is finished with cave-aged gruyere, caramelized onion and arugula ($17). The Rock Shrimp features grilled lemon, manchego, scallions and cilantro ($16). Schwartz’s is fine with his favorite, Braised Fennel (with trugole, basil, caramelized onion and green olive — $14), not being a huge seller. The pizza shows daring and creativity that his customers appreciate.

The daily pizza, entrée and soup specials garner even more creativity and there’s a method to the selections. “We sort of have that down to a little bit of a formula in that there’s a vegetarian, short rib, roasted pork, a chicken, a fish and a lamb. We’ll play with mostly the preparations of these, but not the cuts. So we’ve found things that work that are able to be cost-effective to keep the prices $20 or under on these things, except fish. It’s a little more expensive.”

Harry’s thrives with its set-in-stone pizza menu accompanied by daily specials. “We are able to incorporate and cross-utilized product from (the pizza menu), from these proteins, into the daily pizza special and into the soup,” Schwartz says, adding the strategy limits waste and keeps Harry’s offerings fresh and updated.

A spot-on beer and wine program mirrors the food offerings by focusing on a limited selection with variety.

As Schwartz and company fine-tune the two-unit concept, he looks for Harry’s to expand further. “We’re going for it,” he says. “We are growing. We are going to start out in this region so we think there is plenty of work for us to do. But we also know, for us to be viable, we have to open in other markets. We like the Southeast for now.”

As Harry’s grows, there are many operational decisions to make. “We are putting our infrastructure in place currently,” Schwartz says. “But it’s interesting because we have to figure out what the sweet spot is in terms of size. So what I don’t want is this sprawling 200-seat restaurant, maybe 80 or 90 is the sweet spot. We love the intimacy of the space where you feel like it’s a neighborhood restaurant and that’s important to us for us to be that and not just say that we are. We have a lot to figure out.”

Schwartz offers new operators parting advice: “Figure out what you want to be and be that. It’s really easy to get caught up in that trying to be too many things or trying to do too much. Have vision, define it, refine it and live it everyday.”