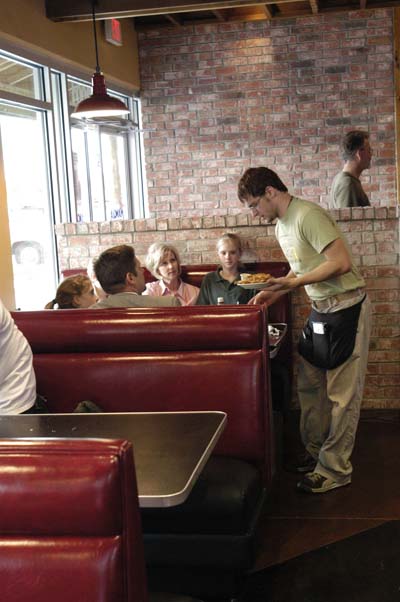 Feet to the fire

Feet to the fire

Holding employees accountable is never easy, but it sure is necessary

Paul Reader compares his pizzeria to a football team running an offensive play. Each employee has certain tasks to complete at certain times and when any team member fails to fulfill his or her responsibilities, performance suffers.

“And it’s not long before you’re fighting from behind,” says Reader, who has owned Pegasus Pizza, a three-store operation in Eugene, Oregon, for the last 15 years.

Though Reader came to Pegasus with a background as a schoolteacher and salesman, two positions in which he regularly interfaced with others, he says nothing prepared him for managing people and, inevitably, holding employees accountable for their misdeeds.
“It’s my least favorite part of the job,” Reader admits.

For many pizzeria owners, disciplining staff is an uncomfortable task. Many resist confrontation or dread the potential repercussions of discipline, namely terminating an employee and needing to find and train a new worker. Yet, New York-based HR consultant Janet Hoffman says holding employees accountable for their actions and meting out discipline as warranted is a necessary play.

“You’re in business to be successful and holding employees to a certain amount of rules and tenets of behavior is designed to promote that success,” Hoffman says.

Danny Bendas of California-based Synergy Restaurant Consultants says adherence to policies and systems remains the biggest issue operators face. From guidelines around food handling and closing the register to uniform codes and executing recipes, employees’ ignorance or blatant disregard for operational standards can weaken a restaurant’s bottom line and its standing with guests.

“Rather than needing to have constant meetings to address issues of performance, putting the effort in to hire, train and communicate the restaurant’s policies and systems is the much smarter investment of time and energy,” Bendas says.

Tardiness is another common issue that frustrates restaurant management and can quickly compromise performance. A recent study from CareerBuilder found that 23 percent of employees admitted to being tardy at least once a month, while 15 percent pegged tardiness as a weekly occurrence.

When an employee arrives late at Tucci’s in Boca Raton, Florida, owner Alberto Aletto issues a firm warning and also requires employees recover the lost time by staying later. If the tardiness persists, Aletto issues another warning and also explains the options he now faces, such as sliding the worker to a different shift, providing fewer shifts or using the staff member as a fill-in worker –– decisions that directly impact the worker.

“The bottom line is that I need reliable people … and if they can’t be reliable, then I need to make adjustments,” says Aletto, who opened Tucci’s in 2009.

Shrinkage, such as employees dishing out comp meals or extra product to friends, remains commonplace as well. When such issues have arisen at Pegasus, Reader is quick to confront the employee. He says most are apologetic, but others, he acknowledges, simply continue with termination as the inevitable result.

To curtail temptation, Reader, who puts all new staff on a 30-day probationary period, hasn’t so much leaned on direct discipline as modern tools, such as the POS and security cameras. For his bar operations, in particular, Reader employs an outside auditor who weighs each liquor bottle and measures the current product against sales. Bar staff receive the results at monthly meetings.

“It’s pricey, but at least I know that large amounts of liquor aren’t going out my back door,” Reader says. “I know some owners will say this is too expensive, but I’d argue it’s too expensive not to do.”

While theft can contribute to shrinkage, so, too, can employees’ lack of focus. At Tucci’s, for instance, Aletto understands mistakes happen: the customer orders a pepperoni pizza but receives one with peppers. Though Aletto will eat the employee’s first errors and smooth over any customer discontent, employees who consistently fail to input orders properly soon begin paying for the wasted food.

“This forces them to be more attentive to the details because now it’s hurting their wallets,” Aletto says. “Otherwise, people will keep making mistakes that cost the restaurant money and damage our reputation.”

When addressing employee infractions, Bendas and Hoffman agree that any discipline needs to be immediate and consistent. Both have encountered operators who hold employees to different standards or who let an issue slide time and again before finally –– and often unexpectedly –– deciding that an employee’s habitual actions are no longer acceptable. Such moves hamper management’s credibility with staff and weaken morale.

“If you’re not addressing an issue immediately and in a consistent way from employee to employee, then that’s when problems mushroom into something bigger,” Bendas says.

And while some owners will toss out terms like “zero tolerance” and “three strikes,” Hoffman says operators should be careful about enforcing such black-and-white policies until they have documented the rules, communicated them to staff and considered if they indeed want the rigidity such clear-cut terminology brings.

“Each organization has to find the right path for itself,” she says.

In the pizzeria business, it’s wise to have documentation and discipline travel hand in hand.
Two years ago, Pegasus Pizza owner Paul Reader hired a professional HR service to help him draft a comprehensive employee manual, which all employees now read and sign. Reader says the document, which defines expectations, policies and procedures for staff as well as the disciplinary structure, provides the restaurant a sturdy operational backbone that has spurred performance gains and lowered staff turnover.

“If you don’t spell things out explicitly, then everything is verbal and employees will find a way to wiggle around your words,” Reader says.

The written word is also important anytime management issues a warning to employees. Documenting the infraction and warning given, whether it was issued verbally or in writing, will help operators in the event that a disgruntled former employee ever takes legal action, veteran restaurant consultant Danny Bendas says.