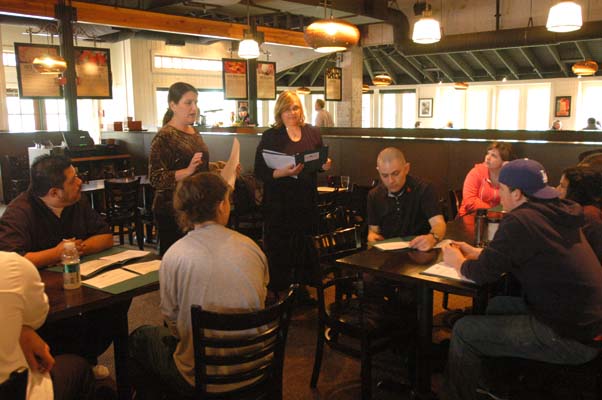 Among multi-unit operations, specifically company-owned stores, how much of that information should be shared –– and with whom –– has emerged an increasingly pertinent issue. Should information be distributed among stores or should each unit function as its own entity?

Leaders of multi-unit pizza chains are asking themselves that very question, seeking a balance between collaboration-driving transparency and the discretion that minimizes security risks and controversy.

Information sharing among locations can spotlight company-wide trends and challenges, highlight the best practices of top performers, foster a culture of accountability and spark healthy competition among units that, ultimately, drives performance. Such an open, transparent culture can also help the company set realistic goals, while empowering store-level management to uncover solutions in a collaborative environment.

“Rather than waiting on the corporate office, managers at the individual restaurants can address their problems individually, maybe calling the manager of a unit that does well with labor percentages or its menu mix to solicit strategies to improve,” says Robert D’Ambrosia, CEO of Ctuit, a California-based analytics company that offers back office support to multi-unit restaurant chains. “By sharing information, there’s an opportunity to learn from one another.”

NYPD Pizza founder Paul Russo shares everything from Yelp reviews to profit and loss (P&L) statements with the general managers of his two corporate-owned stores in Orlando.

“Other than debt service, I share just about everything,” Russo says. “If you’re truly trusting your managers to run the business, then you need to help them understand how the pennies make the dollars.”

“I feel educating people is always for the better and that this openness inspires confidence,” Russo says. “Our managers work with the numbers and understand why they matter.”

Each week, Wisconsin-based Toppers Pizza shares information across its system on key indicators such as sales, food and labor. On a quarterly basis, meanwhile, Toppers brings together the 20 managers of its corporate-owned stores to investigate each store’s P&L line by line. Toppers Vice President of Marketing, Scott Iversen,s calls it an “awesome experience” that spurs collaboration and results.

“As we see it, we’re all on the same team trying to achieve the same goals … and these honest conversations are what drive our business forward,” Iversen says, noting that Toppers overall sales jumped 18 percent in 2014.

Both Iversen and D’Ambrosia note, however, that ownership must build context around the numbers. For instance, one store might be impacted by a disruptive road construction project at its door, while another might now benefit from the completion of a nearby office tower.

“These are not always apples-to-apples comparisons and you have to add context around the numbers,” says D’Ambrosia, adding that percentages, rather than raw numbers, often create more meaningful comparisons.

Though the rationale for sharing information is compelling, D’Ambrosia says the compartmentalized approach remains the more common practice, largely
fueled by tradition.

“The ability to share data so easily is a rather recent development … so the compartmentalized approach fits in the comfort zone of many,” D’Ambrosia says.

Partitioning information allows managers to be singularly focused on their own unit, prevents unrealistic comparisons between restaurant locations and limits the number of people in the organization who have their hands on detailed performance information or proprietary practices (something companies with a sharing mindset generally address with confidentiality agreements). Additionally, many contend that sharing information can become a distracting and time-consuming practice.

“Managers might spend more time looking at others’ numbers rather than their own,” D’Ambrosia says, adding that the less similar restaurants are in operations and geography, the less likely data sharing will provide actionable insights.

Transparency can also deliver a false sense of security or even complacency. Store managers at high-performing units might not have the fire to improve, while managers at struggling units might become despondent. In addition, the ultra-transparent approach can become complicated when the company shows significant profit, especially since few fully understand ownership’s debt load or initial investment.

“There’s a concern when sharing that people will put out their hands and ask for a piece of the action without having the full picture,” Russo says.

As sharing and partitioning information each possesses its own benefits and drawbacks, some champion a hybrid approach in which ownership shares a limited set of information. Ctuit’s RADAR restaurant management software, for example, allows ownership to specify which managers can access which data sets, providing relevant information without overwhelming with unnecessary facts. For example, kitchen managers might see product mix data, but not labor related data, while owners might share percentages around upsell conversions, waste or promotional activity with store management.

“Rather than bottom-line numbers, those are the types of things you might share with little downside,” D’Ambrosia says.

Whatever a pizzeria’s decision, D’Ambrosia reminds that action should be the overriding goal with any data sharing.

“Information without action is more distraction then help,” he says.

Among franchised concepts, Ctuit CEO Robert D’Ambrosia says information sharing is generally governed by the franchising agreement’s privacy and disclosure terms. That reality, he says, typically makes the hybrid model the safest approach, as corporate offices can define the specific information they will share, generally favoring ratios over final numbers.

With its 45 franchised units, Toppers Pizza shares an aggregate of its 20 corporate-owned stores, which allows the concept’s franchisees to benchmark their performance. Russo’s New York Pizzeria founder Anthony Russo, meanwhile, shares a general P&L with defined parameters and averages with his four franchisees.

“I think the franchisees need to have a goal and providing some basic percentages in specific categories helps,” Russo says.

“When each restaurant is allowed to do its own thing, there will be a bigger variance with performance,” he says.