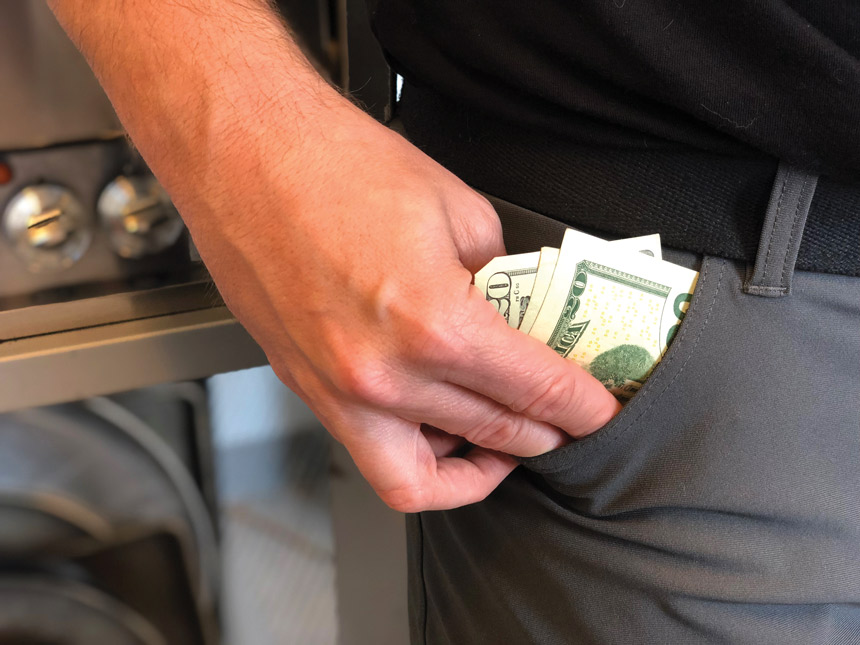 How to spot and stop employee theft

What if your employees, or at least one of your employees, are ripping you and your business off? It might be as little as a wayward breadstick or an extra-long break, or it could be as blatant as stealing money from sales or actual cash from your drawer.

“On average, businesses lose a median five percent of their annual revenue to fraud, and one of the biggest causes comes from employees who steal. In the restaurant industry, the average cost per fraud scheme is $90,000,” according to Tiffany Couch, CEO and founder of Acuity Forensics.

And a thieving employee may be the one you least expect. Kamron Karington, former owner of Wasatch Pizza in Salt Lake City and current founder and CEO of Repeat Returns, was blindsided when an employee he considered to be trustworthy, well-liked and hard-working stole approximately $10,000 from his operation. Karington’s former employee utilized several tactics to skim money from the pizzeria, such as voiding numerous tickets, using another employee’s number to void tickets, and flat-out not registering sales. Every method afforded him a chance to pocket Karington’s profits.

After Karington witnessed suspicious behavior from his employee, he did some sleuthing and discovered the shocking details recorded in his POS system.

“The evidence was in front of me all the time, but I was making money, so I didn’t pay attention. This was my fault. I let it go on for too long. I didn’t do the work,” Karington says.

Although Karington was able to get back half the money that was stolen from him, he wonders now if he should have pressed charges against the thief to serve as an example to the rest of his staff.

Speaking from experience, Karington advises operators to be aware of red flags such as rising food costs with no cause, an employee who voids more tickets or rings up more POS-installed coupons than the rest of the team, voided tickets inputted by an employee who wasn’t working that day, and a perfectly balanced drawer each night. Another red flag, he adds, is an employee who buys expensive items, such as a fancy car on a not-so-fancy salary.

Theft can manifest in several ways, Couch says. Food-related thievery revolves around employees handing out free food, upgrading orders for family and friends and stealing beverages. Couch adds that some employees are not shy about helping themselves to paper goods, supplies and even expensive equipment.

Money-related scams that cost operators include register-skimming and short-rings, Couch says. Owners who aren’t diligent with money-tracking could easily fall victim to register-skimming; at the end of a shift an employee can pocket upwards of $20. If an employee does this at the end of every shift he or she works, the amount stolen will easily and quickly add up to an expensive loss for an operator.

“It’s as simple a scam (short rings) as this: it’s a busy Saturday during college football. A customer orders an $8 microbrew and pays for it in cash. The cashier takes the money and rings it as a $5 domestic beer, pocketing the difference. The customer is none the wiser, because he was charged the correct amount,” Couch says.

As an operator, you’re in the restaurant business to make money, and employees who steal will quickly curtail your profitable goals. But, if theft is so widespread, how can you protect your business?

“To help prevent employee theft, it’s always best to take a proactive approach to hiring by conducting pre-employment background checks based on the role the job candidate will play once hired,” advises Elizabeth McLean, an attorney with GoodHire.com. “For example, for employees who will have access to money, you might choose to run a National Criminal Databases Search to uncover any felony or misdemeanor criminal convictions, any pending criminal cases and any history of incarceration as an adult.”

Drug-screenings before and during employment can also assist with decreasing thefts “by employees who may try to finance illicit addictions,” adds McLean.

By creating a positive workplace that values honesty and ethical behavior, you can increase your chances that your employees will act honestly, notes Couch. And, knowing the ins and outs of your business is integral to knowing when something is wrong.

“Monitor food inventories and track the cost of food as a percentage of sales,” Couch adds. “An easy tip is to lock the walk-in, freezer or stockroom and only allow a few trusted employees to have access. In larger restaurants, an integrated inventory management tool can better keep tabs on supplies.”

Finally, use your existing system or upgrade to a POS system that has your back.

“Implement a modern POS,” Couch says. “Even if you’re a small pizza shop, it’s worth the investment to install a good POS system. Mismatched daily sales reports compared with the money in the till makes cash theft more obvious. You can also investigate the issue quickly by asking who was cashiering or closing at the time of the loss. If employees know you are closely monitoring the cash register, it can deter them from skimming.”

Although theft is a real concern in the restaurant industry, by paying attention to your day-to-day operations and reports and creating a positive work environment that promotes trust, you can help prevent your business from losing money at the hands of your employees.

DeAnn Owens is a freelance journalist living in Dayton, Ohio. She specializes in features and human-interest stories.