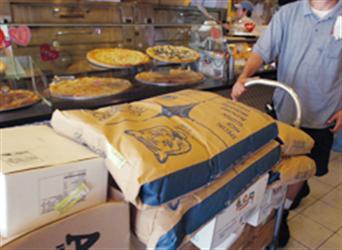 Read carefully before signing on the dotted line

Amid a mounting driver shortage and an increasingly competitive landscape, Papa John’s – that industry behemoth that long enjoyed a seemingly endless army of delivery drivers – has done what some would have once termed unthinkable: it has embraced third-party delivery.

Last fall, the Louisville, Kentucky-based chain signed on with Uber Eats, a move that extended the company’s movement into third-party delivery and complemented its existing deals with Postmates and DoorDash.

“We continue to look for opportunities to meet the customer in the channel of their choice,” Papa John’s senior vice president of customer experience Anne Fischer tells Pizza Today.

But even for a multi-national behemoth like Papa John’s, a pizza-peddling enterprise boasting some 5,300 units around the globe, forging a partnership with a third-party delivery platform is no easy feat. Far more than signing paper, contracts with third-party delivery providers are layered affairs filled with legalese, carefully crafted words and more negotiable terms than many think.

The number atop everyone’s mind

According to Scott Landers, founder of Figure 8, a New York-based food delivery consultancy, the commission rate is the number every restaurant owner wants to know – and one “there’s a lot of horse trading around.” While typical rates run from 25-35 percent of the subtotal, those numbers can – and do – fluctuate based on myriad factors.

“The playing field in terms of market share has intensified for these providers,” Shaw says. “There is no longer one dominant player or ‘clear winner’ in the third-party delivery space, so [restaurant] brands definitely have a bit more room for negotiation.”

So, how are restaurants trying to decrease that all-important commission rate?

Many restaurants are opening their business to a competitive bidding process, defining who they are, what they need and inviting multiple providers to vie for the deal.

“This is the same process run in public procurement … and it’s one of the most effective strategies I’ve found,” says Landers, who has been involved in numerous contract negotiations between restaurants and third-party delivery providers.

In some cases, Landers reports, restaurant brands have successfully pushed fees into the 18-22 percent range, though he acknowledges it’s rare for commission rates to dip below 20 percent.

Savvy multi-unit operators, meanwhile, are negotiating rates for their entire collective of stores rather than piecemealing it off location by location. The benefit of business from a dozen stores, after all, carries more leverage than a single door.

In addition, some restaurants are inking exclusive deals to capture more favorable fees, while others tout an earnest ambivalence – a you-need-me-more-than-I-need-you approach – as one pathway to better terms.

Beyond the commission rate

While fees garner most of the attention when it comes to third-party delivery contracts, it’s far from the only spot owners should mind. A standardized terms of service agreement often covers areas such as marketing, delivery and point-of-sale services as well as customer data, payment terms and dispute resolution. On some terms, delivery players will budge; on others, they hold their ground.

Landers, for instance, has seen more flexibility around differential pricing – the cost of a dine-in meal compared to that same meal purchased through a third-party platform. While some providers actively police prices, he says that’s beginning to wane.

“It’s difficult to charge the same price as dine-in and still have an opportunity to make money in the restaurant,” Landers says.

In particular, pizzeria owners will want to pay close attention to marketing and logistics, namely who supplies the delivery driver.

“If you don’t pay close attention here, you could end up paying 25 percent for marketing only and still have to pay someone to deliver the food,” Landers says, adding that restaurants should also clarify standards of delivery, such as if a store has the ability to decline specific drivers.

Terms of service will also outline who’s handling refunds and under what situations. Left unchecked, this can trip up restaurants, hampering both their brand and the bottom line.

“If you do your part, but the driver doesn’t show up, then what happens?” Landers asks, urging restaurants to “sharpen details around refunds.”

On the issue of data, delivery platforms have largely stood firm, leaning on privacy laws to keep customer information all to themselves. Even if a restaurant cannot obtain specific customer data, Landers suggests restaurant owners redirect the conversation. The restaurant, for instance, might request a review of performance and operations data, including star ratings and guest reviews, at a regular frequency.

“Ultimately, this goes to the restaurant knowing what it wants and what can be helpful to its business,” Landers says.

To the issue of cancelling an agreement, Landers calls most contracts “light,” especially when it comes to non-exclusive arrangements. Termination typically requires one month’s notice.