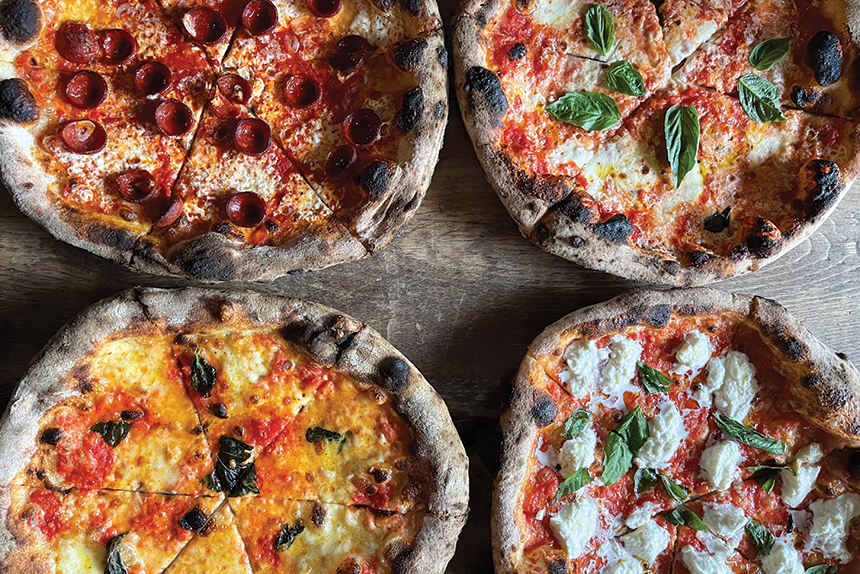 New Jersey operator takes a risk, turns Razza into our Pizzeria of the Year

When Dan Richer’s first pizzeria was booming and his upstart second pizzeria struggling, up for sale and on the brink of closure, he did the exact opposite of what one might expect. And that gamble paid off hugely in the long run.

The road to get here after making that fateful decision may not have been easy, but the result is an even bigger success story than the original — and some serious bragging rights, to boot. Razza, Richer’s Jersey City, New Jersey-based operation, is our 2021 Pizzeria of the Year.

But before we get to that, let’s return to the beginning.

“I owned a pizzeria in the Jersey suburbs for 10 years,” Richer says. “It was thriving. So in 2012 I decided to open a second.”

Though his first operation had a different name, Richer called the new pizzeria Razza. He set up shop in Jersey City and went with a new dough formulation that altered the end product. It was a massive leap forward, in what he hoped would be an up-and-coming neighborhood in a diverse city. And it was failing.

“You can’t be two places at once,” Richer explains. “I was trying to go back and forth between both. I had two different teams that I was trying to lead, and my focus was split and I didn’t really feel like I was a part of either team.”

After a few years of running himself into the ground and seeing that Razza was about to go on life support, Richer took his gamble.

“I actually had the pizzeria up for sale,” he explains. The plan to download Razza and focus on his profitable first store made so much sense. “And I got an offer. I was all set to take it. And then I said, ‘Nope. I’m not ready to go. I believe in Jersey City, and I believe in Razza and I want to see it through and wanted to make it successful.’ So in 2015 I sold my first pizzeria and poured myself into Razza.”

You read that correctly. Richer sold a busy, established, money-making pizzeria to focus on one that had struggled to gain footing in a neighborhood that hadn’t yet come into its own.

“We were having a tough time getting guests in the door,” Richer admits. “We only had 44 seats at that time. And if you aren’t filling 44 seats with pizza, something has to be wrong. I think that the neighborhood was trying to support us. And they did to a degree — we stayed open. But people weren’t coming in during the winters. And nine years ago there weren’t as many people living in Jersey City. I never thought we’d make it 10 years. Jersey City was a different place when we started. If we opened any earlier I don’t think we would have made it.”

The gamechanger proved to be a matter of presence. There’s a saying that the best ability is availability. Once Richer could devote all his energy to Razza, things clicked.

“As soon as I made that decision not to sell it and instead to sell the successful restaurant … I went all in at that moment. And I was so much happier because I became a part of the team here,” he says. “I wasn’t in this in-between place anymore. I realized that this was my happy spot — knowing my staff, knowing our guests and being a part of their lives, being part of my team and leading my team. That was success to me. I like my hands in the dough in certain parts of the day and teaching my staff and for them to grow as individuals and pizza makers and bread bakers.”

And then Jersey City itself began to grow.

“The local government has stepped up big-time,” says Richer. “They’re bringing in so much good stuff to Jersey City. Things that are out of my control have led to people discovering how great Jersey City is. It’s one of the most diverse places in the country, both economically and culturally. There are so many wonderful restaurants here. And we’re eight minutes from Manhattan. We have great public transportation, fantastic views of Manhattan and great architecture. We’re 15 minutes from Newark airport. The bones have always been here. It’s a very special place.”

Richer was 26 when he bought his first pizzeria. Though the product he developed and ultimately sold was good, Razza represented an evolution. The pizza there was similar, but on its own path. With the ability to tinker and an ever-curious mind, Richer dedicated himself to continual improvement.

“When I first started making pizza I had really bad technique,” he says. “I had no real knowledge of fermentation. I learned on the fly and taught myself.”

Richer knew the key was a living dough that he could ultimately manipulate by taking one variable at a time — temperature, time, ingredients, etc. — and making changes until he hit on something. His interest in fermentation grew, which led him into bread baking as well as pizza.

“The more I learned, the more I wanted to continue learning and pushing myself and my bread,” he says. “Ultimately, pizza is a variety of condiments on top of bread. If I wanted to evolve, I figured out that I had to understand bread and first make the best bread I possibly could. Only then could my pizza evolve as well.”

Again, he went all in. This time by taking on an adjacent space that recently came available, allowing him to increase his restaurant’s capacity. Construction on the expansion is underway now, and Richer hopes early next month he’ll be open for guests in the new dining room. The addition won’t just seat patrons, but also includes a bar, more kitchen space and a dedicated dough room.

“We’ll be able to better control variables in that room,” he says. “We’ve got water lines dialed in to the exact temperature we want, we’ll control the air temperature in there to what we want. It’s going to make such a difference to our consistency and our ability to put out the pizza dough we want to put out.”

When the COVID-19 pandemic halted dine-in at Razza, the staff quickly transformed the original space into a to-go-focused concept. Though sidewalk seating helped get the business through the warm months, Richer says Razza will notice a spike once the new dine-in space opens.

“We totally had to alter our model,” he says of the pandemic’s impact. “Where there used to be dine-in tables and bar seats, now there are piles of boxes and to-go plates, napkins, plastic forks. Everything changed. Being able to seat guests and serve guests inside again this winter is going to be huge. Our winters are pretty cold here and it won’t be long before we can’t really seat anyone on the sidewalk. The roller-coaster ride we’ve been on with sales spiking and dipping based on weather has taken a toll. It’s going to mean a lot getting the new dining room open.”

Whether the new space results in a menu change remains to be seen. Razza offers a weekly pasta, fresh bread with homemade butter, meatballs and occasional sandwich items, though the focus during the pandemic has been the pizza.

“We had really been getting into pasta,” Richer says. “We were doing a lot of pasta. But then I realized it was just too much at that time and our focus needed to be on our core product, which is the pizza. We scaled down the menu and did what we needed to do to serve our customers the best pizza we can during all of this. But it’s fun to grow the menu and to experiment, so I’m sure we’ll do some pretty fun stuff once we can.”

JEREMY WHITE  is the Editor-in-Chief of Pizza Today.