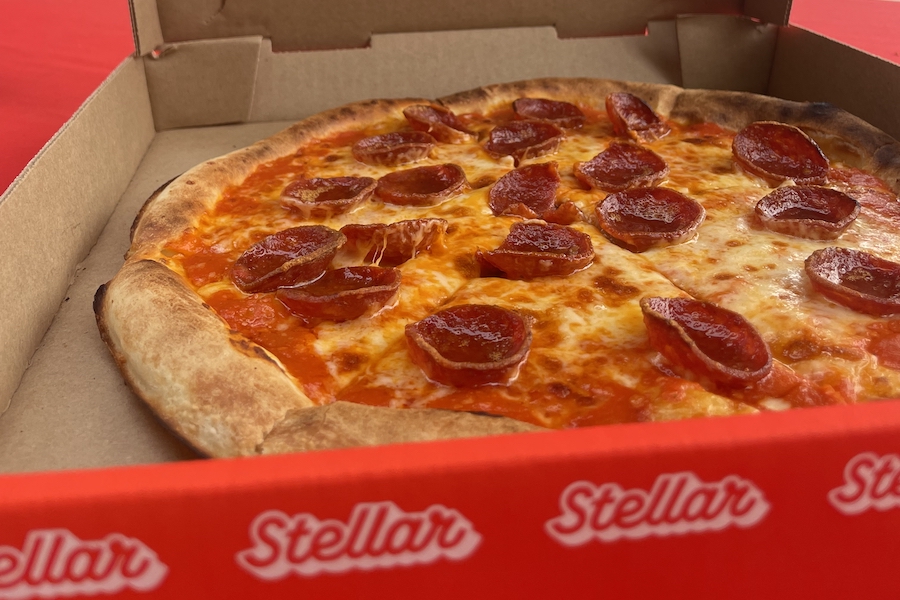 Innovative, robotics-powered mobile pizza restaurant, Stellar Pizza, announces it is preparing for launch in Los Angeles in the Spring of 2022. Under the direction of former SpaceX engineer turned CEO, Benson Tsai, Stellar Pizza uses cutting-edge technology and advanced robotics to create an automated, touchless machine that bakes pizza from scratch in under five minutes. Revolutionizing the pizza-making and delivery process, Stellar Pizza’s efficient, state-of-the-art technology was developed by Tsai and his team of fellow former SpaceX engineers.  Stellar’s team of experts extends to the culinary division. Ted Cizma, former Executive Chef and Director of Culinary Services at SpaceX, collaborated with pizza consultant, Noel Brohner, to create a recipe that makes serving affordable, high-quality pizza to the masses possible.

OUT OF THIS WORLD TECHNOLOGY

With a revolutionary new pizza machine, Stellar Pizza transforms raw pizza dough and fresh toppings into a fully baked pizza in under five minutes. With the maximum capability to produce a pizza every 45 seconds, the food truck can deliver a larger quantity of fresh, gourmet pizzas more consistently than its brick-and-mortar counterparts. The robotic pizza-making process starts with a freshly prepared ball of raw pizza dough, which gets pressed and shaped into a round pizza crust. Then, house-made sauce and fresh toppings are added. Lastly, the raw pizza is inserted into one of four high-temperature custom-designed ovens to bake to perfection.

In May 2019, Stellar Pizza was founded by a trio of ex-SpaceX engineers: Benson Tsai, Brian Langone, and James Wahawisan. Led by Tsai, who has a diverse background in technology, education, and entrepreneurship, he spent six years in the burgeoning electric truck and bus industry, first as a co-founder of Motiv Power Systems and then as an early employee at Lucid Motors. In his new endeavor, Tsai draws from his five years’ experience at Elon Musk’s revolutionary space company, designing advanced battery systems for spaceships, rockets, and satellites. Eager to create his own revolutionary brand, Tsai launched Stellar Pizza in his hometown of Los Angeles with his two passions in mind: engineering and great food. Collaborating with some of the most talented engineers within the South Bay’s thriving scientific community, the result was developing an advanced robotics system that makes one of life’s simplest pleasures, gourmet pizza. Following the launch of Stellar Pizza in 2022, Tsai aims to bring the first-of-its-kind consistently fresh and affordable pizza to communities around the country.

In addition to Tsai, Langone, and Wahawisan, the core engineering team at Stellar Pizza consists of 23 fellow previous SpaceX employees, all of which now lend their combined 100 years of rocket science experience to revolutionizing the pizza industry. The culinary division is led by renowned Chef Ted Cizma and international pizza consultant Noel Brohner. Known within the culinary industry, Chef Cizma incorporates both innovative culinary ideas and quality ingredients into his work at Stellar Pizza. Legendary pizza guru, Brohner, brings 40 years of restaurant and pizza expertise to consult on Stellar’s debut menu. To lead marketing strategies for the new brand, Tsai enlisted restaurant industry veteran and Fresh Brother’s co-founder, Debbie Goldberg, as Chief Marketing Officer. At Stellar Pizza, Goldberg draws from her skills and experience that transformed the once small-town pizzeria, Fresh Brothers, into the sixth-largest independent pizza chain in the country.

Stellar Pizza’s concise menu has intentionally been designed to offer beloved and classic pizza toppings and flavors at the highest quality. Using the finest ingredients available is an unwavering priority for the Stellar Pizzateam. Entirely assembled by robotic machinery, the core ingredients for each pie include homemade dough and tomato sauce, followed by Grande East Coast Mozzarella. Stellar’s menu   includes baking pies with traditional toppings, such as a Pepperoni Pizza or Supreme Pizza. A Build Your Own Pizza option is also available, with fresh topping options like onions, bacon, chicken, green peppers, olives, and more.