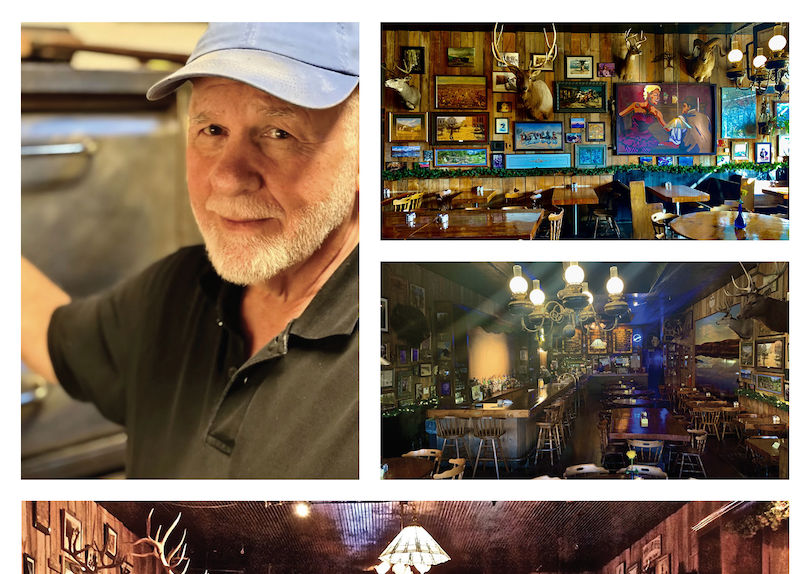 Concept:
Old saloon, open three days a week, Thursday, Friday, Saturday. Reservations strongly advised and can order pizza with reservation. Our artists like Bev Doolittle, in their paintings, they have things hiding inside of them. And the mural in the middle of the room is the Temple of Karnak on the Nile River and if you walk down the bar, the whole thing turns and looks at you. And there is a finger that comes out of the wall that is a hologram. There is the history of my family and the buffalo my great grandfather shot and the elk and the deer.

Pizza & Dough:
I’m from New York. I was raised on pizza, so I wanted to make a thin pizza. These people wanted a big dinner pizza, so I increased the crust a little bit thicker to hold all the toppings. Some of our pizzas weigh seven pounds and they are $50. That way we compromised, and we could do it all. I’ve been making the dough for 40 years and nobody knows the secret and the sauce.

How have you been able to showcase the restaurant’s rich history?

Though my family is from Kansas, I was born downtown New York. My great grandparents had a homestead here, in a dug-out, three miles north of Delphos, Kansas. George and Grace, they raised my father. George was one of a handful of men to survive the Civil War battle of Cold Harbor and the rest of his company were killed. George was Wild Bill Hickok’s and John Hicks’ (The Virginian) trusted friend. He was also the Buffalo hunter for the town, guided a wagon train to Santa Fe, and became the town’s banker. Grace was the little girl that wrote Abe Lincoln and advised him to grow a beard so he could turn the election around in the last month and win the presidency. Grace hated slavery. Many folks come in to see the history on the walls.

What has been key to your restaurant’s longevity?

We have survived because we insist on quality and we’re tough. I do it all myself. I’ve tried to hire cooks and people, but I cook all the pizzas for everybody. I took the restaurant and then I realized that everybody from downtown had moved down south, and the town had spread out, so I had to keep going. I figured when our best days were, and I just opened for those days. That’s how we survived.

After 40 years, what’s biggest lesson you learned in the pizza business?

Don’t listen to those that say you can’t do your dream; just work hard and do your best!