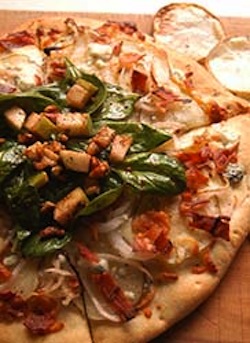 ‘You Say Potato’ on Pizza

‘You Say Potato’ on Pizza

As a child Sergio Vitale traveled throughout his father’s native Italy. “I remember having potato pizza in Tuscany — it stood out as a unique combination. and i loved how simple and delicious it was,” he says. Today, the chef/owner of Baltimore, Maryland-based Chazz: A Bronx original restaurant brings back those Tuscan memories by creating his own version of potato pizza. Vitale’s coal-oven-fired white pizza is topped with sea salt seasoned potatoes, pecorino and fontina cheeses, rosemary and gar­lic. after baking he drizzles calabrese chili oil over it.

“It’s very popular, actually,” says Vitale. “it’s in the top five sellers. People think ‘potatoes on pizza?’ and maybe that piques their interest at first, and then they taste it and get hooked.”

“It’s a popular pizza, and it is also a good vegetarian option (for lacto­ovo vegetarians who eat dairy),” says Rolando Biamonte, co-owner.

Not only do diners at Sazerac Res­taurant in Seattle, Washington, enjoy the potato pizza, but so does executive chef Jason Mcclure. “People really do like it. but for me, it’s really a per­sonal favorite so i really enjoy making this pizza,” he says. Mcclure bakes a Neapolitan-style pizza topped with thin slices of yukon potatoes, thyme and goat cheese or blue cheese.

While it might sound great to have potato pizzas seemingly fly out of ovens due to high demand, operators must bake with caution. Sliced potatoes are delicate. it’s important to not scorch them when baking the pizzas. Golden brown on the edges is great, but burnt throughout is not.

The key is getting potatoes crispy, not watery, says franchini, who cuts potatoes thin and leaves them in water overnight to remove the starch. (Starch can cause the potato’s surface to brown faster than the inside cooks and can make potatoes stick together.)

“Potatoes have to be cut thin enough to cook through, but not so thin they burn — though a little crispy is good. Just pay attention to the thickness when cutting,” Mcclure adds.

When baking potato pizzas it’s also important to know your oven’s strengths. “we have a custom coal oven. with coal or wood, you have to plan around the high heat and adjust the recipe accordingly: how long the pizza is going to stay in the oven and at what temperature. working backwards from there, you can tweak the hydration level in the spuds,”Vitale explains.

The right hydration helps prevent spuds from watering out and making pizzas soggy. Vitale slices the potatoes, then blanches them to hydrate further. “alternatively, sliced, blanched potatoes can be stacked in the walk-in overnight to dry out if necessary, depending on what works for your oven,” he says.

He also “seals” the pizza’s crust with a layer of shredded fontina underneath the potatoes. and he is careful with the potatoes’ spacing. “Too many spuds cropped up in the center will make a soggy pizza,”Vitale says.

To prevent potato pizza sogginess at Numero 28 Cucina, Fausto Sassi, pizza maker, boils potatoes fresh daily then slices them. “The mozzarella and gor­gonzola keeps the potatoes moist. Since the potatoes are cooked already, the pizza bakes quickly, so burning is not an issue,” he says.

Different potato varieties deliver unique taste and textures. operators should play around with assorted variet­ies to see what works best in their oven. Mcclure prefers to use either yukon potatoes because of its taste, or Kennebec potatoes for its high-starch content.

Vitale favors Idaho potatoes. “I prefer starchy potato varieties rather than waxy potato varieties because I think they taste better on the pizza,” he says. “Waxy potatoes have a tendency to make pizzas soggy, and potato slices burn easily.”

Waxy potatoes (such as round white, round red, yellow potato and red potato) are relatively high in moisture and sugar, but low in starch. Starchy potatoes (such as Idaho, Russet bur-bank, Goldrush and Norkotah) are high in starch and good for frying. No matter what variety you choose, all potatoes have the ability to provide a blank canvas for pizzas. The subtle taste blends naturally with a variety of meats and cheeses.

However, proceed with caution. operators don’t want other flavors to overpower the spuds. in terms of top­ping pizzas, a little goes a long way. as Mcclure says, “Keep it simple and the flavors will blend together perfectly.”

Build a pizza, layering the ingredients, as listed up to garnish, evenly over the dough. Bake the pie until golden.

Toss the apple, walnut, spinach, and vin­aigrette together in a small bowl while the pie bakes.

Slice the pie and mound the salad in the center.

Place the vinegar, honey, garlic, and caraway seed in a small pan and bring to a boil. Let simmer gently 5 minutes and remove from heat. Let cool down completely before using. Pour the cooked vinegar mixture into a bowl or food processor and whisk or beat in the oil until it’s emulsified. Season with salt and pepper to taste.