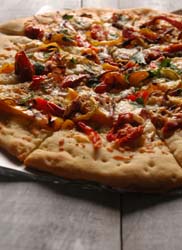 Why bother roasting? Roasting intensifies an ingredient’s natural flavors. it also cooks away the rawness and pulls out some of the moisture that can result in a soggy finished pie.
It is a cooking method where the vegetable is exposed directly to the hot, dry heat in an oven. it promotes browning. There is also a caramelization in which the sugars from carbohydrates turn brown, giving off a unique flavor profile.

While roasting is seen as a simple method, the variety of pizza ovens can impact outcome. Let’s look at deck, wood-fired and conveyor ovens and three operators who have optimized their ovens, while diversifying their menus.

The squash is different. “I’ll cut them into small round disks,” she says. “we do salt, pep- per and olive oil. i don’t cook it too much — it’s almost al dente. my whole purpose is I’m trying to take the raw out.”

While Mia Pizza preps the onions in large quantities to use for a day or two, she finds it easier to roast the squash in small batches to keep them fresh.

A wood-fired oven is where roasting gets a bit tricky, says Patrick Thirion, co-owner of Peel Wood Fired Pizza in Edwardsville, Illinois. “It’s not a gas or electric oven, where you can train somebody and set a time and temperature and cook it,” he says. “it’s more hands-on.”

With an active specials menu, Peel has experimented with roasting — from broc- coli, mushrooms, and tomatoes to cauliflower, celery root and even meats.
Each vegetable is treated differently to get a nice browning. Thirion says mushrooms roast well without a flame, but for his butter- nut squash he puts a lot of logs on the fire so there’s a good flame rolling over the dome.

Cutting vegetables to the right dimension makes all the difference. root vegetables should be cut smaller, while more delicate veg- gies should be chopped larger. Keep in mind how the pieces will look on a pizza, Thirion says.

With a 900-degree oven, Thirion says the pans you choose are crucial. For most veggies, he uses a standard sheet pan. For items that require a longer cooking time, like his oven- roasted maple bourbon bone-in pork loin, he went with a thick cast-iron plate, which helps distribute heat evenly and keeps the bottom from scorching.

Darryl Reginelli, co-owner of the nine-unit Reginelli’s Pizzeria in New Orleans, Louisiana, maximizes his conveyor ovens — roasting eggplant, red peppers, tomatoes and garlic. One run through the conveyor takes about 6 minutes at 525 F.

Peeled garlic cloves are drowned in olive oil with salt, pepper and rosemary. They run through the oven on a sheet pan twice. The garlic can be spread like butter afterwards.

The red peppers and tomatoes are roasted whole, with six to eight passes through the conveyor. They have two applications: skinned and added to the prep line and pureed with skins for a spicy roasted red pepper sauce. The sauce is a big hit and would not be the same without roasting, reginelli says. “It sweetens it and gives a great color,” he says. “It gives it that roasted smoky flavor and takes the acidity out.”

Reginelli offers an efficiency tip: cook the peppers and tomatoes in the morning during prep — place them in the oven, turn off the conveyor and don’t forget to set a timer. a few quick tricks of the trade from rose- Geiger, Thirion and Reginelli:

Place vegetables on a roasting pan in 400 F oven for 45 minutes. (Oven temperatures may vary. Vegetables may need longer or shorter cooking times.)

Place pan on a cooling tray, about 15 minutes, until steaming stops. Place vegetables in cooler until ready to use.

Sprinkle half the fontina evenly over the pizza crust. Arrange the tomatoes evenly over the cheese. Sprinkle on the Parmesan. Lay the bell pepper strips in a pattern on the pizza. Add the remaining cheese. Bake the pizza.