The streets of New York are in the midst of an epic battle. In one corner, the classic slice weighs in with its thin-yet-yielding crust topped with tomato sauce and low moisture mozzarella cheese. In the opposite corner waits a smaller, more delicate pizza baked in a showpiece oven and topped with hand-crushed tomatoes under a sprinkling of cheese whose name your customers have only heard on TV. The prior evolved on the streets of the city over the past hundred years and the latter arrived recently despite its roots in the origin of pizza itself. Who will emerge victorious?

To be quite honest, the New York slice has been going out of style for quite some time. Rising commodity prices and nationwide economic issues have forced many small pizzerias to make decisions to keep themselves afloat at the cost of reducing product quality. Thanks to the influx of Neapolitan and other artisan pizza styles, some savvy slice shop operators are taking a page from the artisanal handbook by using premium ingredients to craft their offerings instead of the old standbys. 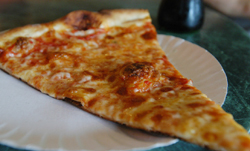 The resulting slice is a welcome upgrade from the monotonous greasy wedge and fetches a higher price. Pizzerias like South Brooklyn Pizza, Best Pizza and La Margarita (their spelling) are proof positive that consumers are willing to pay more for quality. These slice shops use fresh mozzarella and the best tomatoes to elevate their slices from the white noise created by common slicerias.

On the other hand, I also see artisan pizza evolving to meet the demands of a slice-hungry culture. Roman pizza al taglio’s success in New York is a positive response to artisan pizza’s exposure to the New York slice. It successfully combines quick service and elevated ingredient quality in a by-the-slice format. Even pizzerias that don’t sell slices are altering their recipes to make more portable products. Madison Avenue’s Pizza Da Solo, billed as a Neapolitan pizzeria, uses oil in their dough. Even though it’s a major departure from Neapolitan pizza tradition, added oil results in a product that holds up better during transportation. The pizzeria offers only takeout and utilized an American pizza making method to solve its logistical dilemma.

Contrary to what New York “traditionalists” may believe, artisan pizza is more ally than adversary when it comes to slice culture. It elevates pizza’s public image from quick-service snack food to respectable meal and even provides opportunity for further development when it comes to ingredient options. At the same time, New York’s propensity for pizza-by-the-slice has influenced artisan pizza in a positive way that makes it more accessible than some initially perceive it to be. After all, this is not the kind of battle that culminates with a victor; it’s more like a sparring match in which both parties walk out of the ring in better shape than when they went in.