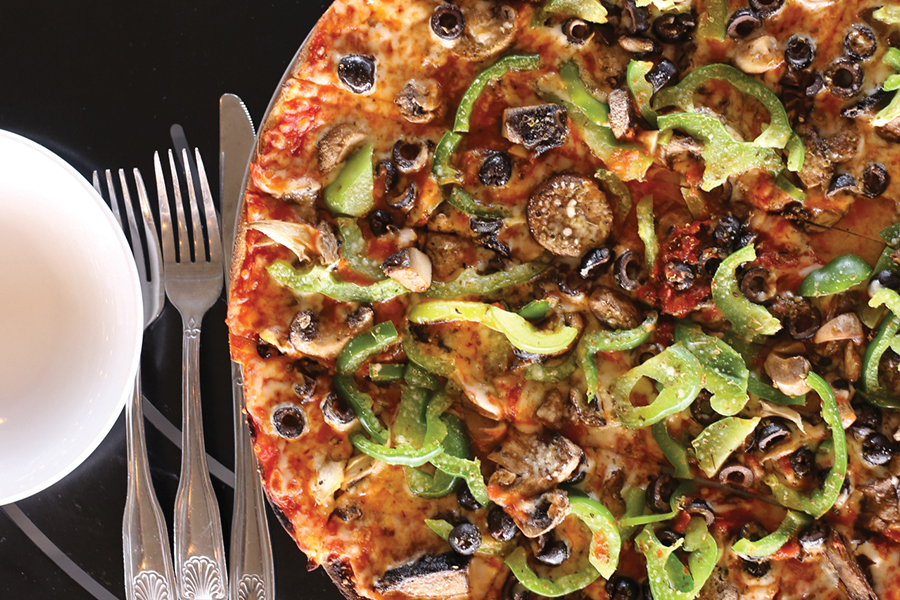 What the heck is St. Louis style pizza? Did you know that St. Louis has its own style of pizza? Yes, St. Louis does indeed have its own style. Of course, it’s not nearly as widely known as say Detroit-style pizza, which was once an obscure unknown regional style before some pizza fanatics uncovered it and brought it to the mainstream. Will St. Louis-style pizza follow the same fate one day? We will see. My guess is that it probably won’t. St. Louis is known as a big small town and small towns like to keep their secrets.

I am not sure if the creation of the St. Louis style was deliberate, created by necessity or created by someone who didn’t know what they were doing — like the person who stumbles upon gold. The origins of St. Louis-style pizza are obscure, but many regions developed their unique style of pizza based on cultural characteristics of the particular area. We must assume that the style developed in tandem with other Midwest regional square-cut thin pies. Like all “party cut” pizzas, it was created to be a snack. The tavern or party style cut gained popularity after WWII as a sharing food offered by local taverns and bars made extra salty so patrons would drink more.

Provel cheese originated around 1947. It’s a quick gooey melt (think Kraft American singles and those grilled cheeses you ate as a kid). It was supposedly created by a grocery store in the Italian Hill neighborhood of St. Louis. Legend has it that it was created to avoid the stringiness of mozzarella. It was also the year another St. Louis culinary treat was supposedly developed, toasted ravioli (deep fried ravioli).

Provel is certainly controversial in the pizza world. Ever since an adventurous or misguided chef put this processed cheese combination on pizza in place of traditional mozzarella, a raging debate of its worthiness has ensued. Provel has been the subject of lore as well as a victim of derision. The jury is still out. Kraft currently owns the trademark to the name Provel, but every St. Louis-style pizza spot has their own blend they usually make in house. It is also considered St. Louis style if it has the above characteristics but uses mozzarella. I would say with people I know here it’s 50/50 on Provel’s popularity as the cheese of choice on their St. Louis-style pizza. Most out of towners who move here hate it, usually (with good reason, as most are used to mozzarella).

Although round and cut into squares, St. Louis-style pizza should not be confused with Chicago thin or New England tavern style (bar pies). The difference being Chicago thin uses yeast. It is also partially baked in a pan with butter before hitting the hearth. Although also thin, it is just a bit thicker. New England bar pies spread the cheese all the way to the end of the crust and over it. They are also cooked in an oily pan first. Neither of these styles use a “Provel” like cheese. However, cheeses other than mozzarella are sometimes added.

Legend has it that Ed Imo (founder of the famous Imo’s Pizza chain that was established in 1964) cut the pizza in squares because he was a linoleum tile cutter, so cutting squares at the pizzeria was a natural fit. Imo’s is by far the largest chain doing St. Louis-style pizza with over 100 locations. Imo’s is the most well-known purveyor of the St. Louis-style pizza and has become synonymous with the style itself. Imo’s is credited with the use of Provel instead of mozzarella, but this assertion is questionable. I have to say before this article I thought Provel was disgusting. I spit it out the first time I unknowably had it. I soon realized the pizza I ordered for my daughter’s then two-year-old birthday in 2010 had “Provel” on it, NOT mozzarella. It happens to be the default cheese at Imo’s. I didn’t make that mistake again. For this article, however, I indulged in a St. Louis-style pizza binge ordering Provel on my pizza. Being opened minded I do have to say I have more appreciation and respect for the style now.

The quality of St. Louis-style pizza varies considerably depending on where you go. In my opinion three old school places are the standard: Farottos (1956), Monte Bello (1950) and Frank and Helens (1956) do it best. These restaurants are still in their original locations stuck in time. And as far as I can tell no design elements have been updated since the 1950s.

If you are not in St. Louis, you can still enjoy making a St. Louis-style pizza. Use an all-purpose flour and roll your dough with a rolling pin extra thin, as thin as you can. No need for long fermentation or fancy dough techniques. Cook your tomato sauce with oregano and add a touch of sugar. Make your own Provel with a combo of Provolone, Swiss and White Cheddar. And voila! It is a wonderfully different pizza to make and enjoy with friends and family. Will it be a menu hit for you? Time will tell.

Scott Sandler  is a consultant, speaker at Pizza Expo and Pizza and Pasta Northeast and Pizza Today contributor.