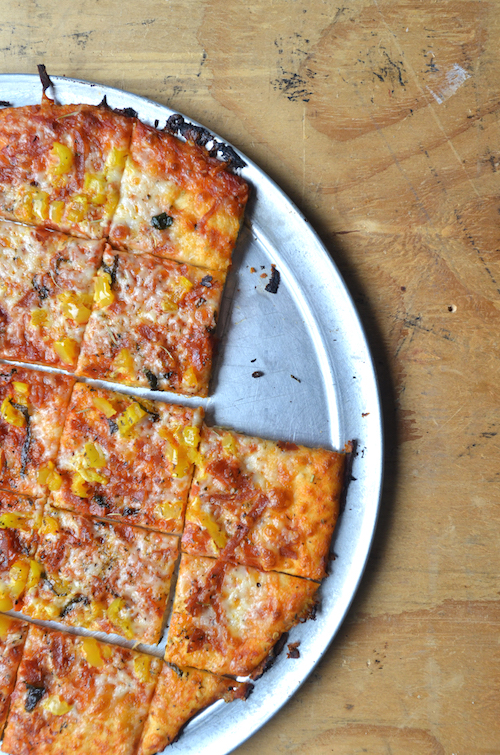 Pretty Fly for a Bar Pie

Pretty Fly for a Bar Pie

When Adam Kuban started blogging about pizza in 2003, he had no plans of ever running a restaurant. Eleven years later he finds himself at the helm of Margot’s Pizza, a pop-up that’s getting more praise than most established pizzerias. With a decade of pizza-focused food writing under his belt, Kuban has been exposed to every style and technique imaginable. But when it came time to put his dough where his mouth is, he eschewed industry trends and opted for a genre that’s not on anyone’s list of foodie buzzwords –– yet. Margot’s Pizza serves bar pizza, a no-frills working class pie that’s just beginning to distinguish itself from the smoky venues in which it originated over half a century ago.

As the name suggests, bar pizza is traditionally served in taverns and pubs; however, every pizza served at a bar is not necessarily a bar pizza. The genre is characterized by several key characteristics, most important of which is its size. A bar pie is always small enough to be eaten by one person, with an average diameter of 10 inches. Crusts are usually thin and crisp with a dense crumb and biscuit-like texture. Sheeters and rolling pins are common methods of opening the dough, both of which ensure a simple process that results in uniform products. Bar pies are almost always baked on circular pans, so they tend to get topped all the way out to their circumferential border, leaving little to no raised edge. Since pans are greased for quick release, the underside of the crust does not char, but browns to a gentle, slightly sweet finish.

As with most American pizza styles, bar pies emerged during the aftermath of World War II. Post Prohibition era bars and taverns installed gas-fueled deck ovens in an effort to offer food alongside pitchers of beer. The bar pizza genre grew not from traditional Italian recipes, but from the ingenuity of bar owners who saw the benefits of providing inexpensive food that would keep their bar customers on the stool. Over time, the popularity of these personal pies grew to such an extent that the establishments were known more for their pizza than their drinks.

Even the most significant bar pizza establishments are relatively unknown to the outside world. The Lynwood Café is one of over two-dozen such businesses on the South Shore of Massachusetts. This working class Boston suburb has a higher density of restaurants serving bar pizza than any other part of the country. Frank Kurlitis, his wife Paulie, and father Alfonse Skirmon, all of Lithuanian descent, founded the Lynwood after closing their bar in Maspeth, Long Island in the late 1940s. They moved to Randolph, Massachussetts, and took over an old grocery store space to build their new tavern. Although they’ve offered other items throughout the years, the current menu at the Lynwood Café consists of just 11 pizzas, each of which is under $10 (not including the “extra cheese,” which is $10.20). The Lynwood is a local landmark on the South Shore of Massachusetts, but bar pizza has always been unknown to mainstream restaurant culture — until now.

After 70 years on the fringes, bar pizza is starting to attract some serious buzz. Margot’s Pizza has received accolades from sites like Eater, Gothamist, Serious Eats, First We Feast and Bloomberg Business. But Adam Kuban is not the only bar pie evangelist. Detroit natives Zane and Brandon Hunt started serving it earlier this year at Via 313 in Austin, Texas. Prior to opening their brick-and-mortar location, they served only Detroit-style pizza from a pair of trailers. When they opened their sit-down restaurant, there was enough room to add a second style. Unsure of which culinary direction to go, the Via 313 crew hit the road to visit some classic spots in the New York City area. They didn’t know exactly what they were looking for but the answer was clear when they came across Star Tavern in Orange, New Jersey. “Star (Tavern) reminded me of some places in the Detroit area I grew up with,” says Zane. “When I went to Star, I felt at home right away.”

Kuban agrees with the draw of familiarity, citing his first visit to Colony Grill in Stamford, Connecticut, as a nostalgic throwback. Colony Grill “has a lot in common with the thin crust Midwestern pizzas I grew up (with),” he says. “I think bar style has a lot in common with what I was exposed to as a kid as the ideal style of pizza.” At a time when showpiece ovens and imported ingredients are bringing about a need to educate the consumer, bar pizza works because it’s familiar.

The established bar pie joints seem to agree. Elaine Campanella, matriarch of the Lynwood Café, loves her family’s pizza, but enjoys the business more for its role as a backdrop for her customers’ lives. “We’ve had engagements here, people finding out they’re going to become grandparents. It’s just so wonderful to be a part of these peoples’ lives,” she says. “It’s such a warming feeling for society because people have so much going on, but they can just come in and be (themselves).”

MORE history of the bar pie at PizzaToday.com/more/barpies