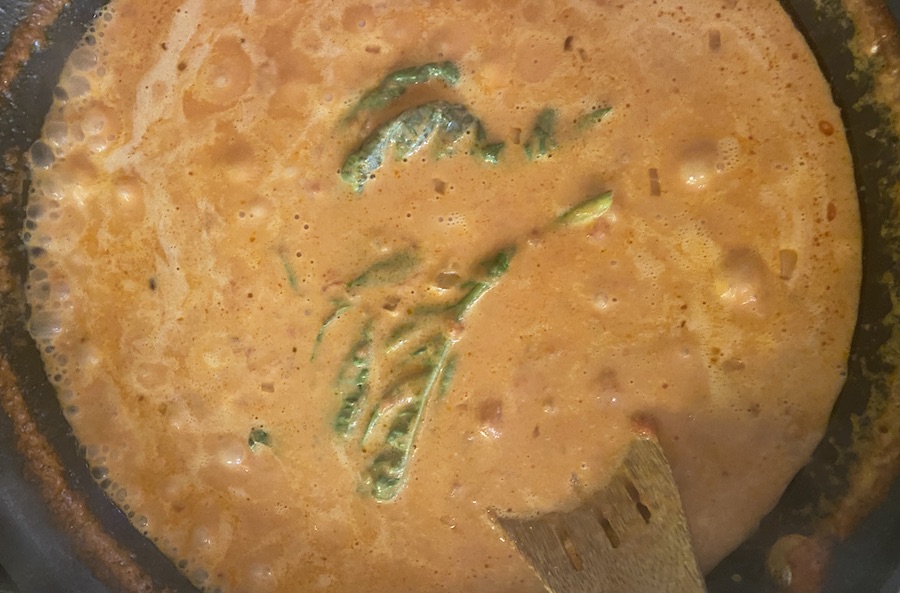 “Vodka sauce is wonderful. Pairing it with penne is classier, but rigatoni is more subversive.”
— Chef Joe Bianco

There are more ways to make vodka sauce than there are galaxies in the sky. Just read the glorious online promises from bloggers and writers exalting their recipes with “best ever” or “perfect way.” Other recipes are peppered with “simple trick” or “transformative” and even “positively magical.” Penne alla Vodka is one of the most popular pasta dishes in the United States, but there is a huge difference between making a plate of pasta in a controlled recipe kitchen and making sixty pasta plates an hour in the hot chaos of a real restaurant. It is in this frenetic insanity where the restaurant chef shines, because their only concern is the sauce, the pasta and the dish. This is where vodka sauce gets personal.

The history of vodka sauce is as complex as the flavor itself and shaky at best. One claim is from James Doty, a Columbia University graduate student. Dante Restaurant in Bologna, Italy, is proud to say that their chef invented the dish, but there is a Roman chef that says he invented Penne alla Vodka to popularize vodka in Italy where wine is king. Others say it was an invention by Italian American chef Luigi Franzese of Orsini restaurant in New York. Whatever you believe, the combination of pasta, tomatoes, cream, cheese and vodka is genius. This explains why it is the fourth most popular pasta dish in America according to Taste Atlas.

Many pasta aficionados say that the addition of vodka both elevates the tomato flavor and makes the sauce creamier. Vodka, like other distilled spirits, enhances the release of fruity esters and other aromas at low percentages because the alcohol molecules have a slightly sweet taste and a pungent hotness. As the alcohol is cooked off in the sauce, the sweetness of the tomatoes is enhanced while the bitterness of the boozy alcohol taste disappears, leaving only a nuanced touch of heat.

On the flip side of this, famous author and teacher James Peterson says in his James Beard Award-winning Book Sauces: “Vodka is useless in sauce making because it is a completely neutral-tasting product.”

Vodka sauce is a distant cousin to Sauce Aurore, which means sunrise in French and was a specialty of Chef Giovanni de Negris at La Primavera restaurant in Chicago. He paired his tomato puree with a thick béchamel and a medley of vegetables and proteins. It can also be made with tomato puree and sauce velouté (or a sauce supreme).

Let’s get down and dirty and muddle through the many ways that chefs put their individual flavor branding upon vodka cream sauce.

Here are a few dishes that show the flexibility of a good vodka cream sauce: 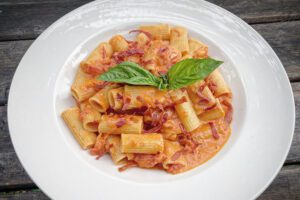 This is probably the best pasta I’ve ever made. This version takes shape with the little nuggets and tips from my years in kitchens and talking to chefs. Adding pasta water to the sauce rewards you with a wonderfully luscious sauce and the small chunks of tomato flesh really pop around the cream sauce and crispy Prosciutto.

Get the Rigatoni with Vodka Sauce and Prosciutto di Parma Cracklings Recipe.