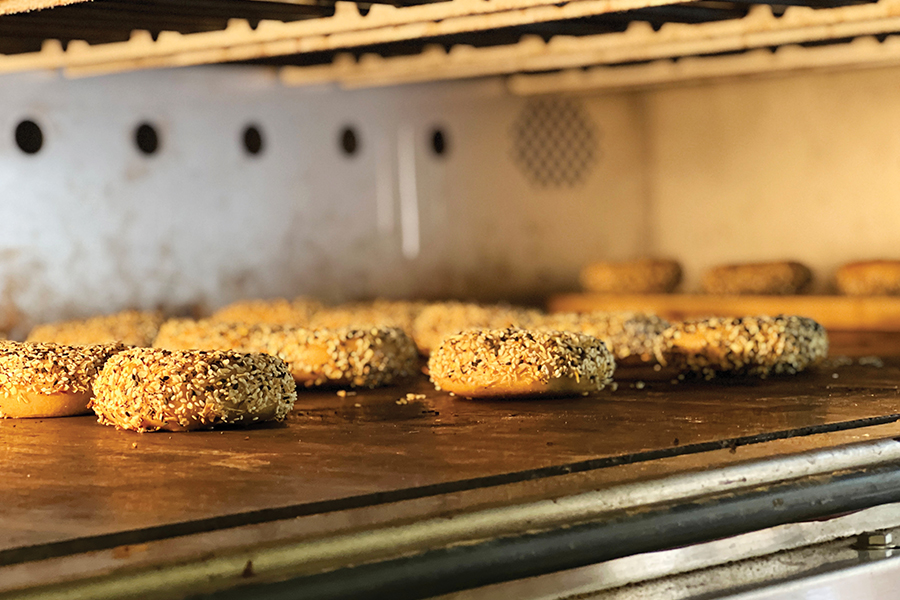 Man on the Street: The Bagel Trend

Man on the Street: The Bagel Trend

A ‘Hole’ New Future for Pizzerias

I don’t know if pizza makers are getting inspired or bored, but I’ve noticed a trend in pizzaioli getting serious about bagel baking. Maybe you’ve seen bagel experiments on the social media accounts of Tony Gemignani, John Arena, and some of the country’s other prominent pizza makers. Are bagels the next big trend in pizzerias or is this just a fad?

We first have to acknowledge the cosmic connection between pizza and bagels. Introduced to the U.S. as immigrant foods, both have undergone transformations resulting in versions that are more popular than their ancestors. Their doughs are made from the same basic ingredients (flour, salt, water and yeast) and even share the same high protein flour. Both products are the subject of a common (yet inaccurate) myth that the best versions are made with sacred New York tap water. And lest we forget that when pizza and bagel are combined, they create a dish that can be eaten in the morning, in the evening and even at suppertime.

The first pizza maven I saw crossing the tracks was Jeff Krupman. Back in 2018, he added the Bagel Macher brand to his Bay Area pizzeria, Pizza Hacker. It was a tasty way to honor his Eastern European Jewish roots within the context of his playful pizza restaurant. By doing so, he was able to utilize a daypart during which he was previously closed.

Next came Phil Korshak, former head pizza maker at Home Slice Pizza in Austin, Texas. He dove head-first into bagels, starting with a project in Minneapolis. Phil ended up in South Philadelphia to open his eponymous bagel shop in 2021. Based on the rave reviews and daily sell-outs, I’d say he made the right move.

Tony Gemignani caught the bug and lit up San Francisco with his launch of Dago Bagel, a brand available at his North Beach Toscano Brothers Bakery and Italian grocery, Giovanni’s Italian Specialties.

Even though pizza and bagels share common ingredients, the two doughs aren’t necessarily interchangeable. While pizza dough has been trending towards higher hydration these past few years, bagels are relatively low in water content. That’s because the classic New York bagel isn’t just a roll with a hole in the center; it’s a dense bread with a chewy exterior. To get that chewy crust, a proper bagel is boiled before the bake. That quick gelatinization of the bagel’s exterior is what prevents the bread from expanding into a light and fluffy loaf.

If you’re thinking about adding bagels to your repertoire, keep in mind the additional space and equipment you’ll need to boil, bake and store your bagels. Boiling means you’ll need a large pot or boiling tub. Classic bagel shops bake on burlap-lined wooden baking boards before flipping their rounds onto the oven hearth. Then there are the proofing trays and speed racks you’ll need to stage your bagels overnight (plus the walk-in space to fit them). Nothing a pizzeria can’t manage on a small scale, but definitely a major project for a large-scale operation.

I love seeing pizza makers stepping out of their comfort zones to experiment with other bread products, especially one as close to my heart as bagels. The few examples I’ve mentioned have proven that great bagels, much like great pizza, are possible far beyond the confines of New York City’s five boroughs.