“Life is too short not to order the bacon dessert.” – George Takei

As I visit my farmer friends for vegetables to make artisan pizzas throughout the week, I always keep an eye out for the best-selling items like asparagus, strawberry, tomatoes and pears. The farmers are very accommodating but as I wait for the inevitable question about buying the hard-to-sell items like turnip, parsnip, rutabaga, daikon and kohlrabi, I cringe inside. Unlike Europeans, we here in the U.S. have a twisted relationship with traditional root vegetables that are popular over there. The thought of trying to manipulate these downtrodden vegetables into a good selling pizza weighs heavy on me. But because these farmers are my friends, I usually cave into their lame sales pitch because I know the secret weapon lies not in the roasting, curing, pureeing or slicing of the poor selling veggies. It lies in the age-old pairing of what sometimes seems to be my best friend. Bacon! Turning Clark Kent into Superman doesn’t require a phone booth. Not when you have bacon. 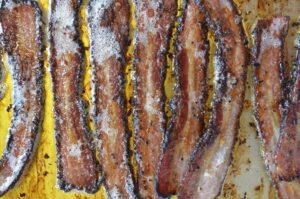 Bacon, as it is named now, has a long history. The pig was first domesticated from wild boar in the Tigris bason in eastern Turkey as long ago as 13,000 BC. Greek historian Herodotus said that any Egyptian who brushed against a pig immediately jumped in the Nile to purify themselves. But it was found that Pharaohs offered them at temples and feasts. Egyptians all imbibed in pork in predynastic times and usually ate it simply with oil and scallions, but it fell out of favor with the ruling class during the old kingdom. The Romans loved pork bellies braised in garum, (fish sauce) and especially loved the young pigs rescued from the jaws of a ravenous wolf because they though it made the meat more tender. As the wagon trains made their way across this country in the old west, a campfire favorite of fried, creamed salt pork was popular on the trail.

Today, bacon is still very popular and with our industrial food system, some pork belly is processed using pigs that are caged for life, seasoned with nitrates, pinned with liquid smoke, and treated as a commodity, not as a food. More and more companies are now making uncured bacon that is humanely raised and smoked naturally because… it tastes better.

In many a pizzeria, bacon is used in shaved frozen form, which makes it extremely easy for topping pizzas. Some of this bacon turns darker and turns the top of a pizza a dull brown that is not pleasing to the eye. Other choices for pizzeria owners are the strips, or as the English call “Rashers,” either thick or thin. This bacon, in raw form, needs to be par cooked before putting it on a pizza to ensure a fully cooked product on the pie. Other bacon choices are as follows.

Whole pork belly: This is probably the most delicious way to present on a pizza either sliced thin or, as the French call, “lardons.” Bellies taste best seasoned with salt, pepper and sugar and held overnight with or without nitrates. (Nitrates will ensure that no botulism will occur and turn the bacon flesh into a pleasant pink hue- but there are serious health concerns with using nitrates. Please research before you use them.) The belly then can be cut and smoked, (This will turn it technically from pork belly to “bacon.”) although there should be a catch basin in your smoker to catch the copious amount of fat that will render down. I like to cook my belly at 290 F in my bread oven until it reaches an internal temperature of 190 F. This usually takes two to 2.5 hours depending on the thickness of the belly.

Pancetta: There are two types of this Italian salt-cured pork belly. The stesa (flat), which is cubed or cut and added into soups, sauces and sautés; and the arrotolata, which is rolled and used for thin slicing for use in antipasto, sandwiches or with breakfast breads.

Fresh Side: This you can find at local farmers markets and is a raw pork belly usually sliced by the butcher for sale by the rancher. This is wonderful to par bake with soy sauce or spiced with Berbere seasoning, cumin, Aleppo peppers, marinated in adobo or just par baked with garlic powder, salt and pepper before placing on a pizza.

Back Bacon: This is from the loin and the leanest cut of bacon. It is often fried for use with breakfast or for sandwiches. The middle bacon from the side of the pig is also lean with an eye of lean meat surrounded by fat.

Lardo: This is not from the side but is brine-cured pork back fat with herbs and garlic. It has a silky-smooth texture and a deep, wonderful flavor. This is fantastic when thinly cut and placed on a hot cornicione, or pizza crust, right out of the oven to melt into a beautiful crunchy flavor bomb.

Beef Bacon: This is from the “Plate Cut” near where pastrami is from and mimics the fat to meat ratio of a pork belly. Beef Bacon is salt cured and smoked and is very strong in its beefy taste and it crisps up nicely on a pizza.

Lap Yuk: Meaning “wax meat” in Chinese, this strongly flavored pork belly bacon is marinated in Chinese spices and slowly dried. It is usually chopped into other dishes for a blast of flavor.

Ayrshire Cure Bacon: This Scottish rolled bacon is skinned and dry cured without the rind, which produces a strongly flavored bacon.

Bacon a great sizzle for shizzle

Bacon can introduce smoke, salt and fat to any pizza depending on which type of bacon you use. Bacon lends another layer of flavor to vegetables and is a perfect start with many sauces. It also combines with greens, fruit and acid very well. Here are some items that work well with bacon on a pizza: Chanterelle mushrooms, chicken, eggs, lettuce, shallots, arugula, winter squash, lentils, onions, parsnips, peas, spinach, tomatoes, avocados, olive oil, maple syrup, nuts, scallops, salmon, risotto, Fontina, Manchego, Gorgonzola, Feta, Cheddar, Gouda and Rutabagas. 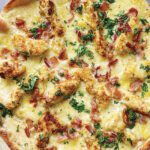 This pizza is a knockout blast of all the lusciousness in a traditional Cordon Bleu dish. The difference is that bacon is used instead of ham, and they all bake on a pizza. If you use non-crunchy chicken, you can always toss the panko breadcrumbs on the pie after the oven bake.

Get the Chicken “Cordon Blacon” recipe.