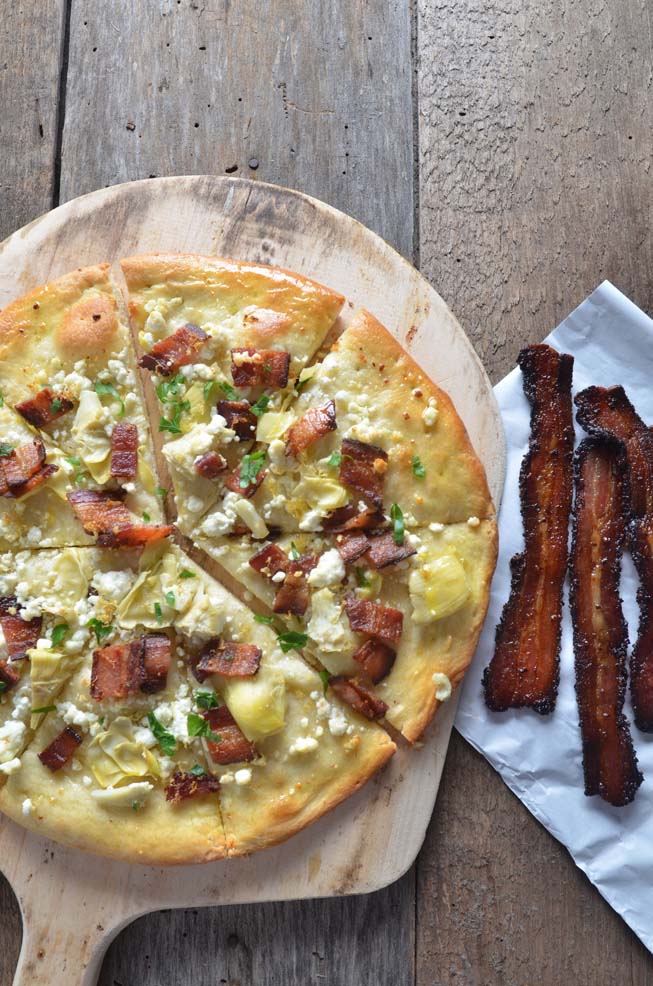 The king of all pork products is tops in pizzerias

As my wife and I watched a competitive cooking show a few months back, one of the judges tasted a certain dish and said, “Chef, I loved your dish but you cheated.”

“Uh, excuse me? I don’t understand?” stammered the red-faced chef as the other judges and contestants stood by shocked.

“Your flavors and textures were all on point but you used bacon, and, to me…THAT is cheating.”

I stood up and screamed, “Dag gum right, Mr. Judge!” (Or something to that effect.) My wife didn’t understand and looked at me as though I was completely nuts. I sat in silence then said: “Everything is better with bacon; it’s been that way since the dawn of time…he cheated.”

She walked away shaking her head.

In Neolithic times, the pig was domesticated for a number of reasons. New farming methods brought on a surplus of food. Humans also realized that pigs could not digest straw, grass, leaves or twigs and were no threat to the new fields of planted grain. Pigs did have a taste for the same food as humans, so in China and Europe these little guys usually shared some part of the house because they could be fed on scraps and matured at the age of one year with the sows producing two litters each year with up to 12 piglets. Even today the word for “meat” and “pork” are the same in China. In Paris, pigs were so prevalent on the streets that they became a common sight until October 1, 1131, when Prince Philippe was killed by a wayward hog that had spooked his horse. In 1350 a royal decree followed that gave the police and public executioner the added job of capturing and bringing any loitering pig to the Hotel-dieu for slaughter.

Bacon derives its delicious taste and texture from the fatty belly of the pig. Unsmoked, cured, and/or marinated, it can be called “belly,” “sliced rashers” in Australia, “fresh side” in the U.S., “lardon” in France, “pancetta” in Italy, “Lop yuk” in China and “Jou Buta Bara” in Japan. Bacon itself refers to the cured and smoked flavor profile we all have come to like and has been sold in slices for decades.

As a pizza man, I always see bacon as an accompaniment to other toppings such as broccoli, onion, chicken, ranch dressing, tomatoes and any vinegary toppings like banana peppers or jalepeños. This is just my opinion, but as we make thousands of pizzas a year in my place, bacon is rarely the ONLY topping. The fat flavors of bacon hold out a great hand to fresh spinach, mushrooms, avocado, celery, (a great combo tossed with ranch, gorgonzola and tomato), potatoes, zucchini and even blackberries or kimchi!

Bacon can be had in innumerable forms for any pizzeria. Just like sausage, you can lose a lot of flavor with pre-cooked products but with bacon, pre-cooked in some form is always safer for your customers and a real time-saver in productivity terms.

Pre-cooked bacon dice and crumbles can be obtained for 44 to 50 cents per ounce. This is a product that can go from freezer to pizza anytime. Whole slab, double cured and hardwood-smoked bacon is 33 cents an ounce. This can be advantageous if you are using the fatty juices to make some killer sauces but consider the added cost of labor. The downside to pre-cooked bacon is that it tends to burn in conveyor ovens and as a single topping I urge you to sprinkle below the cheese for an unburnt taste.

Bacon is a fantastic bridge for building a flavor relationship between fat, salt, acid and sugar. Apples are especially fantastic sliced thin on a Japanese mandolin and cooked with bacon. And anytime maple syrup and/or pineapple are used on bacon, the flavor attack is on! Here are some other great pizza combinations I’ve found successful with bacon:

Infusing flavors into bacon slices is always fun but remember, this flavored bacon is for topping a pizza. I always take the uncooked bacon to the next level by a quick sweat in the oven to release the fat that would dilute the flavor infusion by the addition of heat. So, less fat equals a more in-depth marinade for some killer flavored lardons for pizza. The two best bacon-topping flavors that I sell are the wet chipotle and maple syrup infusion — but I also have found success in coating bacon slices with curries, paprika, coarse pepper and even porcini mushroom powder. The process for both flavorings is the same.

1 pound of thick sliced, smoked bacon (this should be 8 to 9 slices for each marinade below)
1 can of chipotle peppers in adobo sauce (These are usually in 7-ounce cans) or 3 cups maple syrup

Place the bacon strips on parchment and cook at 475 F until the bacon has melting fat coming off of it. This is approximately 4 to 6 minutes depending on oven. Do not let it brown or shrivel up. Let cool.

Crush the whole canned chipotle peppers in with your fingers and add to the adobo sauce.

Place the adobo sauce or the maple syrup in a small enough lexan or a baggie so that the liquid is in constant contact with the bacon. Place in the walk-in refrigerator overnight.

In the morning cut to small enough pizza topping slices and cook on any pizza.

This sauce is a great variant of the cumin-y tomato broth for the popular Tortas Ahogadas, (drowned sandwich) of the Jalisco region –– including Guadalajara –– in Mexico. The Torta Ahogadas is usually pulled pork or chicken nestled in a crisp birote bread bun and swims in this spicy, medium or mild sauce (depending on the restaurant). I’ve always loved this sauce combination whose flavor profiles are a perfect fit for any pizzeria. Try this on a pizza with cheddar or Manchego, black beans, green peppers and chicken.

In a bowl, toss the onion, oil, bacon, jalapeño and cumin with two tablespoons water. Place on a pizza pan (pizza oven cooking) or in a sauté pan (for the stovetop). Run through a conveyor or put in a deck oven at 475 F for six to eight minutes until the onions are wilted. Make sure the bacon does not burn and toss the ingredients as much as possible to integrate flavors. (Or in a sauté pan cook on medium high until flavor are integrated also.) Remove to cool.

When cool, add the pizza sauce and the onion/bacon mixture and pulse on high with a stick or stand blender. This should yield 4 cups of sauce. You may also add same amounts of mayonnaise and sour cream for a bodacious dipping sauce.