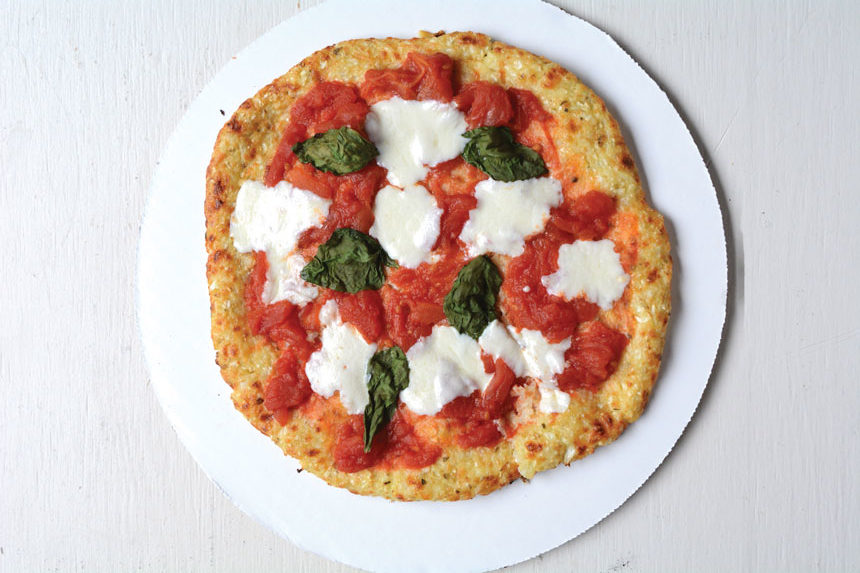 Cauliflower is everywhere these days, from rice to mashed potatoes to pizza.  It’s a flowering member of the cabbage family. Known as cruciferous vegetable, the nutrient-dense cauliflower is the chameleon of the group that can be transformed into a variety of foods. It can be minced, mashed, riced and even cooked, dehydrated and milled. Cauliflower is mild and takes on the flavor of whatever you combine with it.

Though cauliflower has been a substitute crust since the late 2000s, it began to pick up steam a few short years ago. During that time, the marketing research firm Nielsen reported sales of cauliflower-based products soared 71 percent and they haven’t waned since.

That’s about the time that Doug Craig introduced a cauliflower crust to please one specific customer who wanted a gluten-free option at his 900-square-foot takeout and delivery pizzeria in Findlay, Ohio. Dougie John’s Pizza was one of the first in the area to menu a cauliflower crust pizza. Fast-forward two years, the cauliflower crust is a hot seller. Wednesday is $10 Cauliflower at Dougie John and includes a 10-inch pizza with up to four toppings.

Dougie John uses a pre-made, par-baked cauliflower crust he sources from his supplier. Though when Craig launched it, he went with a crust he found at a local restaurant supply store. “We have a deck oven, so we felt like the crust was made more for a home oven. It was almost overcooking that crust at the temperature we bake at,” he notes, adding that they’ve switched to another brand that tested better at Dougie John’s oven temperature.

At around $2.60 per crust, pricing is critical, he says, adding that there’s no waste with that crust. His pricing strategy was to take the price of Dougie John’s regular 10-inch pizza crust and add $3 to cover the cost. “I feel like everyone gets it,” he says. “If it’s healthier, it’s going to cost more.

“Our biggest seller is a veggie,” he says. “Our second best are our chicken, bacon ranch and buffalo chicken bacon ranch. We also make it into a garlic cauliflower cheese crust like garlic cheese bread.”

Cheshire Pizza & Ale debuted its cauliflower crust in January. Co-owner Dimitri Magriplis says they sell about 100 pies a week, a great number for an unknown product. “It pairs well with pizza toppings,” he says. “It’s not bland. It’s seasoned well. It complements the ingredients versus your traditional gluten free.”

Cauliflower sales are pulling from gluten-free sales a bit, he says. “They are the ones that seem to be shifting from gluten free to cauliflower because there is a better flavor profile than the options they were given under gluten free.” And it’s not just gluten-intolerant customers. “I’d say 90 percent to 95 percent just have a lower level tolerance with it or are doing it for their own reasons,” he says.

Craig and Magriplis offer advice to operators who are looking to add a cauliflower crust. “The first thing I would recommend is to find a good quality crust that gets crispy,” Craig says. “We find that that’s what people are looking for. The second thing is you want to find a crust that bakes well at a high oven temperature. Some of the crusts would actually burn on the bottom. They would get too done. The crust maybe wasn’t designed for commercial use. I could buy them cheaper, but it wouldn’t give me the same quality that I have using the (product that I have). I make sure that my supplier knows that (others) are selling them for this, and they’ve worked with me on the price. Price is definitely something you want to discuss but being an independent, you always want to take quality over a cheaper price in my opinion.”

Think before you leap. “It’s not something I would take and throw on my menu without knowing that there is a draw from my clientele,” Magriplis says. “Depending on the type of establishment that you have, whether it is more dine in. Keep in mind this product cooks quickly so it needs to be eaten quickly because it will cool quicker. If it’s takeout or delivery and you are looking at 20- to 40-minute turnaround time, I wouldn’t feel comfortable as an operator endorsing the integrity of the product after that much time has lapsed.”

Magriplis goes on to say, “It’s not so much the brands going up against each other as much as it is finding the sweet spot based on the type of oven you use. The issues that you encounter with that is in finding the sweet spot in how long you are going to cook. In our case we use conveyor ovens. I can’t run it on the belt the same way I run my normal pie so I kind of run it through the middle. “Your toppings need enough time to cook in order for it to make sense,” he says. “That takes a little bit of work and time and you eliminate certain toppings from cauliflower crust for that reason. So, for example, our sausage which cooks on the spot through the cooking chamber, I won’t recommend it. If people want it, we’ll go through the extra step of par cooking it before we place it on the crust to finish it off. It’s the same thing with the vegetables. We pre-roast those vegetables.”

They both warn to do your homework on the specific cauliflower crust on whether it meets the many claims that are out there, such as low-carb or Keto Diet-friendly. Magriplis says they are in the early stages of developing a Keto-friendly cauliflower crust.

After much research, we tried our hand at making a basic cauliflower crust in the Pizza Today test kitchen. Here’s what we discovered:

Here’s the basic recipe that we worked with in the test kitchen:

Get the Margherita on Cauliflower Crust recipe.