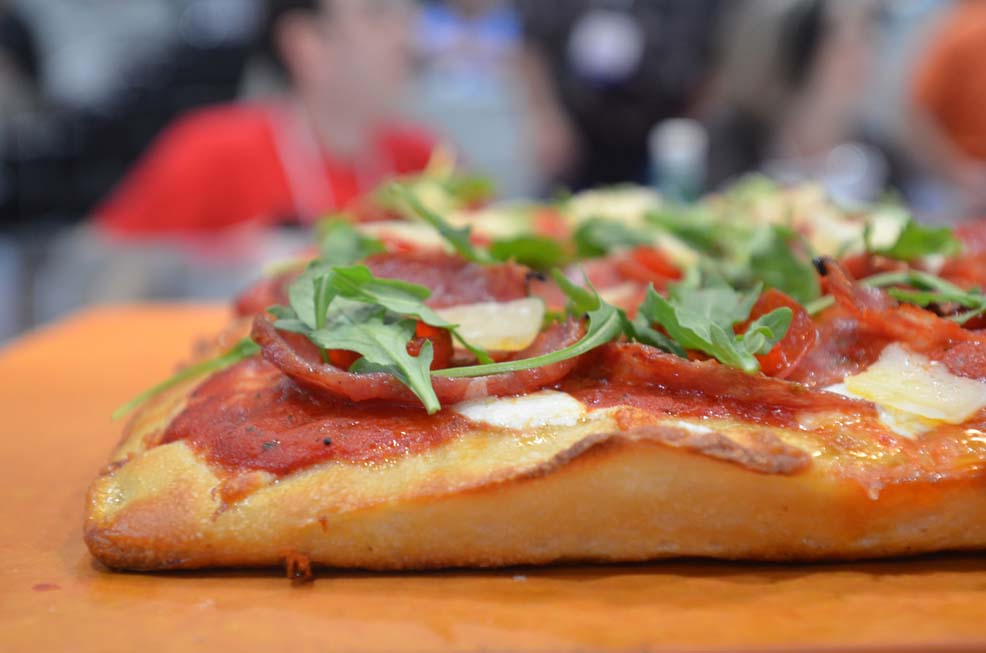 Q: We are thinking of adding thick-crust pizza to our menu. What is your take on using a par-baked crust?

A: If a par-baked crust ever had a place where it excelled, this would be it. I can’t think of a better application for a par-baked crust than in making thick crust/deep-dish pizza. The biggest problem in making thick-crust pizza is the need to proof the dough, allowing it to rise and develop a light, tender eating characteristic, which should be your ultimate goal.

To do this, we must allow the shaped/panned dough to rise for a period of time which can be anywhere from 45 minutes to three hours or more prior to dressing and baking. In working with a fresh-made dough concept the problem is how to have dough ready to bake at any/all times of the day. Sure, it can be done, but it takes a lot of dough manipulation such as proofing, refrigerating and tempering (optional) before dressing and baking. Even when done well, there is still the possibility of making a pizza with dough that has not properly risen, resulting in a less-than-ideal consumer experience. By using a par-baked crust, we can allow the dough to proof/rise to a predetermined amount under close supervision and then par-bake it. You might need to adjust the baking time and temperature to get the best par-baked crust characteristics but this generally isn’t much of an obstacle as the crusts can be baked prior to opening or during slow time later in the day, especially if you have multiple ovens where one of the ovens can be temporarily dedicated to baking par-baked crusts until needed.

To make a par-baked thick crust I like to use either an 18- by 26-inch sheet pan or individual round/square/rectangular pans. Once you have determined the dough weight best suited for your application (I like to start with a dough loading factor of 0.124 ounces per square inch of pan surface area), sheet or press the dough into the pan with oil to ensure release and develop an extra crispy fried crust characteristic. It may be necessary to press the dough in the pan several times after rest periods of 20 to 60 minutes to get it to completely fit the pan without pulling away from the sides of the pan.

Next, cover the pan to prevent drying; allow the dough to proof/rise to about ½- to ¾-inch in thickness; and par-bake just enough to set the dough. The crust will have a very light tan to golden color to it at this time.

Immediately remove the crust from the pan and invert it onto a screen or rack to cool. Inspect the par-baked crusts to ensure that they are fully baked. If you see what at first appear to be translucent spots (they look a lot like oil spots) these are areas of dough collapse due to insufficient baking. You will need to adjust the baking time slightly longer while possibly lowering the baking temperature a little (15 to 25 F) to prevent developing too much crust color. Once the crusts are cooled, they can be bulk packed (penny stacked) in a box with a food contact approved plastic liner and stored at room temperature for up to four days.

To use the par-baked crusts place the crust into the same size pan it was originally baked in (with a little added oil for an additional fried effect) for an individual pizza, or if it is a slice cut from a large sheet pan size crust just place it onto a suitably size solid tray for baking. While a screen can be used here, I think the screen allows too much air to pass over the cut side of the crust slice creating a dry edge(s) on the slice. At this point, the par-baked crust can be dressed to the order and baked.

Q: Is it possible to formulate a pizza for improved DELCO (delivery & carryout) properties?

A: All of the research that I’ve done over the years has indicated that the formulation of the dough has a minimal impact upon the DELCO properties of the finished pizza. With that said, the actual baking of the pizza I believe is more influential on the DELCO properties which, in turn, may necessitate some formula adjustments.

Are you confused? Allow me to explain the reasoning here. We have found that the greatest improvement to DELCO pizza properties results from a longer, slower bake, not a fast bake as many of us are accustomed to. The slower bake allows for the development of a thicker, heavier bottom crust and an overall drier pizza, thus reducing the amount of steam in the box or bag which gives us the soft, soggy pizza we so much want to get away from.

Allowing the pizza to steam off for a minute or so before placing it in the box also helps to reduce the amount of steam carried into the box by the still hot pizza.

As you can see, there is more to be done from a procedural stand point than a formulation stand point to ensure the best pizza under DELCO conditions.