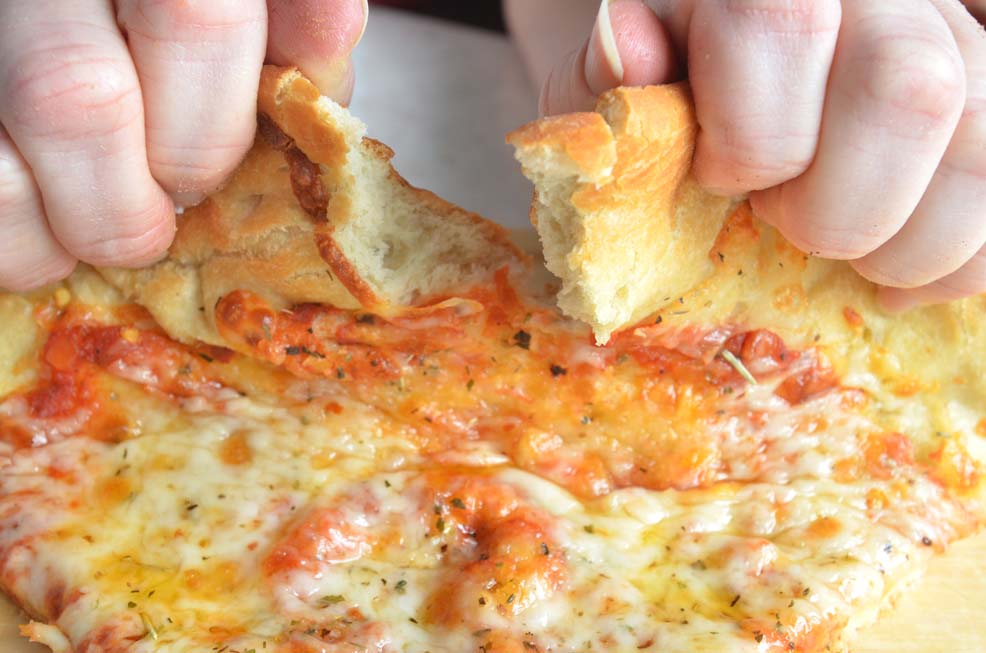 Q: What’s causing your crust to be too chewy?

A: There are a number of factors that can contribute to a tough and chewy crust characteristic. For example, use of a flour that is overly strong (high in protein content) for the dough management procedure being used can result in an excessively tough and chewy characteristic. I am always reminded of a major pizza chain that made its reputation selling thin-crust pizzas, and then one day the decision was made to introduce a thick-crust pizza that was aptly referred to as being “thick and chewy” in nature (truer words were never spoken). My belief is that, with the existing technology at the time, the new crust formula utilized the same flour as its thin-crust counterpart. With fermentation already on the short side, not much of the protein was weakened/mellowed by fermentation. This resulted in a crust that was indeed thick as desired — but tough. How tough was too tough? For me it was when I couldn’t eat more than one slice of the pizza because my jaws were getting sore from the chewing. In this case, a lower protein content flour, such as a bread flour or even an all-purpose flour, would have probably been a better choice as it would have provided the same thick crust but with a more tender eating characteristic.

When we encounter an excessively tough and chewy thin-crust pizza, the problem might be due to improper dough management techniques (such as a finished dough temperature that is too low, which therefore results in insufficient dough fermentation). Another cause for a tough and chewy crust characteristic is trying to sheet the dough too thin, thinking that it will make for a crispier finished crust. Just the opposite is true. Our dough formula and dough management procedure can be “spot on,” but if we sheet/roll the dough too thin we end up degassing the dough, making it more dense. The heat then passes right on through the dough without ever getting it hot enough to fully bake it and we end up with a crust that might have some resemblance of crispiness when it comes out of the oven but soon progresses from crispy to tough and chewy. The answer here is to use a different method to open the dough into a pizza skin (hand formed or pressed) or to open the sheeting rolls slightly to give a thicker pizza skin better able to create a heat/thermal block.

Once in a while I encounter instances where the problem is related to sauce issues. In these cases the sauce has been overly diluted with water, too much sauce has been added to the pizza skin, or the pizza skins are dressed in advance of an order and allowed to set out for a period of time before going to the oven. We typically see a similar issue with the sauce and moisture from the vegetable toppings in a DELCO (delivery/carry out) situation. In this case the pizza is placed into a box, and then maybe into an insulated bag and allowed to sweat for upwards of 30 minutes. Sometimes the combination of moisture from the top of the pizza soaking into the crust and steam released from the hot pizza work their magic to create tough and chewy crust.

Lately I have seen pizzas being baked at too high of a temperature, resulting in the crust getting nice and brown while the inside of the crust is just barely baked. As the pizza begins to cool the crust may actually collapse a little or at very least it begins to take on a tough/chewy characteristic. At one time we used to see this as a common problem with the different types of conveyor ovens (both infrared and air impingement), but now I see the problem more frequently with stone deck ovens where we have the ability to bake the pizza at very high temperatures. Still, with a ton of toppings on the pizza it is difficult, if not impossible, to get a decent bake on the pizza under these conditions. Thin, lightly dressed pizzas can be baked quite well under these conditions, but if you are going to be more generous with your toppings a lower baking temperature and longer baking time will probably result in a better finished product.

Lastly, even sugar or some other browning agent, such as milk or eggs in the dough, can contribute to a tough and chewy crust characteristic. In this case the mechanism is similar to that of baking in an oven that is too hot — the browning agent gives a nice brown crust color signifying that the crust is properly baked, but in reality only the outer portion of the crust is thoroughly baked. This is not to say that you cannot or should not use any of these ingredients in your dough formula, but you should be aware that you may need to adjust the baking time and/or temperature when any of these browning agents are used if you want to achieve the crispiest and most tender eating characteristics in your finished crust.