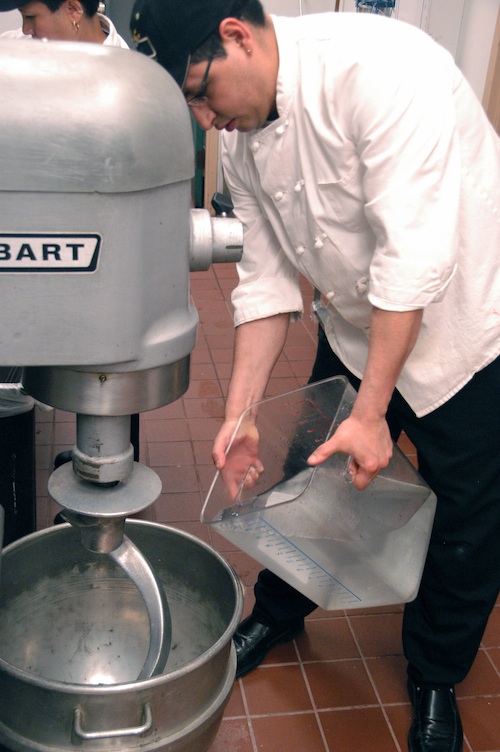 Does the water you use really impact your dough that much?

Q: How does water quality impact my dough?

A: Various aspects of the water can impact the dough in different ways. For example, iron in the water can react with many oxidative dough strengtheners such as ascorbic acid or azodicarbonamide (ADA) and, to some extent, even potassium bromate. While we don’t usually think about these additives, the truth is that in many cases they are present in the flour that we use since they are added at the flour mill to improve the quality of the flour, and their impact upon our dough might be more significant than we think it is. So if we open a new store in a different location where there is now iron in the water, it might have an impact upon our dough by reducing the shelf life of it under extended refrigerated or frozen storage. Fortunately, it’s easy to remove the iron with proper water filtration at the store.

Water hardness is probably responsible for more dough issues than many of us are aware of. For example, let’s take two different stores on two different water supplies. One store gets hard water while the other store receives pre-treated (softened) water — and both stores use the same dough ingredients and formulation. But the store that gets the softened water always has a softer dough, so we reduce the dough absorption. The reason for this is due to the strengthening effect of the calcium in the hard water (the calcium has been removed from the softened water). A very simple way to correct this is to add either non-bromated mineral yeast food (MYF), or calcium sulfate (CS), both of which are available from any ingredient supplier servicing the baking industry. My recommendation is to just add the .5 percent MYF or .25 percent CS to the dough made at both locations. This will give you a standardized dough formula, and it will not adversely affect the dough made with hard water in any way. Along these same lines, I’ve also encountered municipalities that draw their water from lakes or rivers as well as deep, underground wells. In this case, we have found that when the water is being drawn from a surface source it tends to be softer. It is lower in mineral content than the water drawn from the wells which usually contain a higher level of dissolved calcium (hardness). Since we don’t know when the water source is changed, we see a variation in dough softness (stickiness in extreme cases) for no apparent reason. This is another case where the addition of the mineral yeast food (MYF) or calcium sulfate (CS) will allow you to have a more consistent dough without the need to be constantly making changes to the dough absorption.

Water temperature is another variable with a water supply. I’ve seen any number of dough formulas that call for cold tap water. The temperature of tap water can change both seasonally and geographically. For example, the tap water temperature in Chicago, Illinois, is about 57 F. 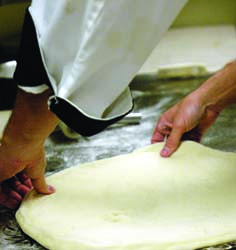 The acidity or pH of the water can also impact the dough quality. In cases where there is some sulfur in the water an activated carbon filter will remove the offensive (rotten egg) taste and aroma, but it will not address the alkalinity of the water common when sulfur is present in the water. Since yeast is an acid loving organism, it does best in a lower pH environment, so the high pH of alkaline water can slow down the yeast activity and result in dough that doesn’t rise properly. Fortunately, there’s an easy fix. In this case, an acid type mineral yeast food would be used at about .5 percent to effectively address the problem. Or plain white vinegar could also be added to the dough at .25 percent to replace an equal portion of water. Don’t worry about the acetic (vinegar) smell of the dough — it will be completely eradicated in the baked crust.

One water issue of great discussion is that of flavor imparted to the finished crust by the source of the water used to make the dough. Specifically, we have all heard of how only water from New York City will give a finished crust a true, distinctive, New York City flavor. If you’re a firm believer in this, I won’t try to change your mind, but my own personal experience dictates otherwise. While on the Island of St. Maarten, I visited a pizzeria called Pizza Amore. Using nothing more than a deck oven, a planetary mixer and local tap water, this shop made pizzas that could make you think you were in a New York City pizzeria. The question to be asked is, “where did the water come from?” Since the island doesn’t have any wells to source water from, they collect rain water and process it into potable drinking water, probably making it as far from New York City water as one could get. But the crust characteristics and flavor were still there. Go figure!

I don’t think there is any real uniqueness in NYC water, but I do believe that the amount of variation encountered in other water supplies across the country plays an important role in finished crust flavor; however, if measures are taken to adjust for those differences, the finished crust can be made with the same unique textural and flavor characteristics of a NYC pizza.