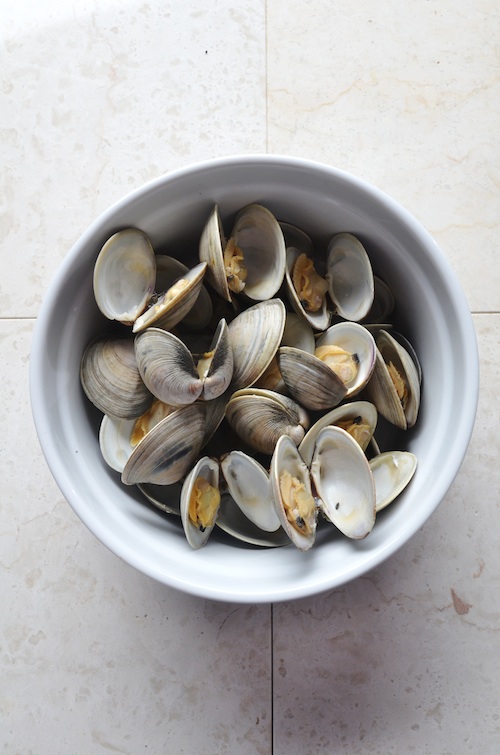 In 2007, I entered the World Pizza Championships with my fresh diver scallop and truffle pizza. I was glad to know that the scallops I had meticulously kept iced had survived the two-day wait until being cooked on the pizza. Twenty minutes later, as I stood waiting to enter my Neapolitan pizza, a man I recognized to be one of my diver scallop pizza judges approached me. “Hello, you are the one with the scallop pizza?” he asked.

As I looked at his funky German slit-glasses, checkered-pleated pants, paisley ascot and shiny shoes, I said, “Yes…oh, I recognize you as one of my judges. How did you like it?”

“Who, in their right mind, would put scallops on a pizza?” His eyes squinted in a sure sign of pizza-righteousness.

“Well obviously, I would! My pizza had the perfect balance of…” he cut me off.

“I think you should know that seafood does not belong on pizza.”

I felt my blood boil.

I turned and leaned into his space, “So, you probably didn’t score me very high, huh?”

“Well…” he backed up knowing that I was contemplating a little beat-down, “Seafood belongs…”

“Listen you little geek, until you open your minds to different flavors, textures and ingredients, you’ll still be stuck in the ’50s wearing a stupid paisley ascot like Rock Hudson or Liberace…” I reached for the neck scarf, which made him scoot away hastily looking over his shoulder as my teammate pulled me away. It was from that time on that I’ve been on a seafood pizza crusade to change people’s minds about the dreaded seafood-pizza combination!

In my pizzeria, I have found that there is a definite ‘niche’ for seafood pizzas. I serve an amazing amount of my “Hot Tuna” pizza, a thin crust with canned tuna, an Asiago Béchamel sauce, mushrooms, artichoke hearts, our famous ‘Ninja’ hot sauce with wasabi and fresh tomatoes on a mozzarella-provolone mix. Another popular menu item is the “Genovese Shrimp” with a pesto-cream sauce, artichokes and tomato. In February, I gather up as many different kinds of anchovies that I sell and advertise “The Athens, Ohio, fishing fleet is back!” and create a simple pie with onions, capers, olives, pecorino, tomato sauce as well as Peruvian, Moroccan, Sicilian and Spanish white anchovies.

What cheeses go best with seafood? This is the question of the ages. A better question would be: what seafood goes best with what cheese?

Mild fish on pizza not only have to compete with the assertive crunch and malty wheat, they also have to pair well with sauce and cheese. For example, at the French World Pizza Championships, red mullet –– which is strikingly red in a spoke-pattern on a pizza –– has a flaky, delicate flavor that was paired with thin crusts, light Brie-type cheese or stracciatella and spinach, well-cooked potatoes, cream sauces and almost always lemon juice or zest.

Other mild fish that I’ve tasted that rock are:

Assertive fish brings to pizza a great awakening. I consistently make a variant of the Pissaladiere from Southern France, which is quite similar to the Sfincione of Sicily and the Pizza Andrea Doria from Liguria. All these pizzas at their core are made with what I consider the holy trinity: anchovy, onion and olive. Garlic, parsley, oregano, pecorino, tomato and even capers are often added to these pizzas.

Anchovies come in all sizes and flavors as well as variations with which to cook. I make a great Bagna Caulda (braised heart of romaine) by tossing the crunchy lettuce in puree of garlic, anchovies, lemon and parsley with olive oil. I then put on a pizza with astringent aged provolone, Gaeta olives and capers … it’s the bomb!

Shellfish are probably the best shining stars of all seafood pizzas and the clam is reigning king. I wish this recipe was mine but it isn’t. Still it is up in the top three best pizzas I’ve ever eaten.

Bruno’s Famous Clam Pie
I only had about 13 Littleneck clams so I had to add chopped canned clams. If you double the fresh clams in this recipe, it doubles the clam flavor.

Using a small sauté pan on high heat, add the clam juice and the 13 clams. (If you have all fresh clams, double the clam juice and upgrade to a larger pan.) Cover and steam for 5 to 8 minutes until all the clams have “popped.” This may take a few shakes of the pan to coax some clams open.

Put the clams in a bowl. Place the juices in a separate bowl.

Using the same pan under medium high heat, add 1 tablespoon extra-virgin olive oil. Add the bacon and sauté for 1-2 minutes. Add the garlic and onion. Sauté for 5 minutes until the onion and garlic are translucent and the bacon is just getting golden brown.
Add the chopped clams, clam juice and white wine to the pan. Turn to high and reduce for 3 minutes. Add the tomatoes. Sauté for 5 more minutes, stirring until the sauce is not watery. Take off the heat.

Bang out your pizza dough. Brush with the extra virgin olive oil and dust with the Parmesan cheese. Place the mozzarella on the dough.

Place the clam topping all over the pizza and slide the pizza and parchment onto the preheated cookie sheet in the oven. Bake for 6 to 9 minutes.

Place the opened clams on the pizza. Put back in the oven and cook for 5 more minutes or until the bottom is dark golden brown and the crust is a golden brown.

John Gutekanst  owns Avalanche Pizza in Athens, Ohio and has a pizza blog called Pizza Goon. He is an award-winning pizzaiolo, baker, teacher, speaker and author.