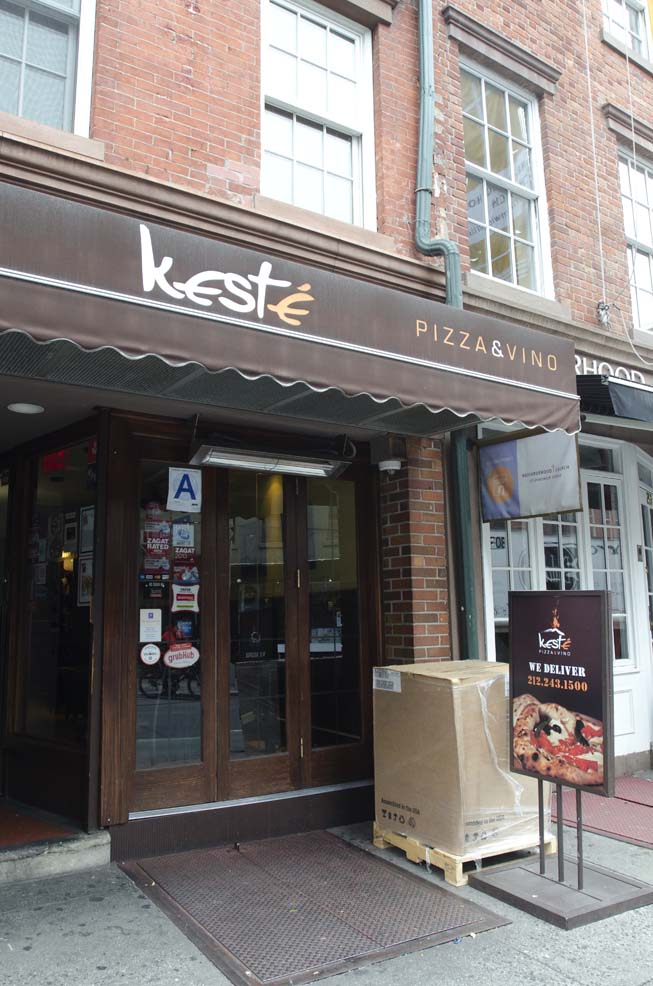 Every now and then, a concept hits the pizza scene that finds the right combination of concept, star power and craftmanship. Such is the case of Kesté Pizza & Vino in Greenwich Village in New York City. What the restaurant lacks in longevity (it opened in 2009) it more than makes up for in momentum. Kesté, it seems, has struck a chord with New Yorkers, who know a thing or two about pizza. The company has won accolades from dozens of publications, and chef-owner Roberto Caporuscio has built a universal –– and international –– following.

So what makes Kesté so successful? It is difficult to piece together a story about Kesté without an intricate look at the man behind the brand. Caporuscio himself was born and raised on a dairy farm in Italy and literally grew up making cheese. He landed in New York by way of Pittsburgh and New Jersey, where he had owned and operated several pizzerias.

Does he worry about giving away trade secrets? “I think it’s really important to spread that knowledge,” Caporuscio says. “Competition sort of (keeps) you alive.”

Many Neapolitan pizzaiolos focus too much on perfecting their dough and don’t spend enough time or emphasis on the other ingredients as well. Neapolitan pizza is the cumulative result of dough, toppings, how it is stretched and how it is handled in the oven, Caporuscio says. “In this kind of work, you need to be really open-minded. It’s very simple: water, flour, yeast and salt, but it’s very hard work.” When Caporuscio teaches a class, he gives each student one piece each of salami, pepperoni and mozzarella, basil, an eggplant, a pepper and two pizza doughs. You can create the same pizzas, he says, but because they are made by hand, you can have two differing results. Working with dough requires a modicum of flexibility.

Still, Caporuscio doesn’t like to make substitutions on his pizzas. (When he owned a pizzeria outside of Pittsburgh, customers labeled him the “Pizza Nazi” for sticking to his guns.) With a large menu, there should be something for everyone, Caporuscio believes. Sure there is a classic Margherita (tomato sauce, homemade mozzarella, pecorino romano, basil and EVOO at $13), but customers also enjoy caciocavallo, Italian ham, pistachio pesto, butternut squash cream and sliced lemons atop some pizzas.

“We have 50 pizzas on the menu and I don’t like to change toppings,” Caporuscio says. “I try to give variety to my customers. I am very careful on how I put ingredients on.” The pizzas he has created have the perfect combination –– and number –– of toppings, making them fast and consistent each time they’re baked.

“Seven different toppings on a pizza? C’mon, it’s impossible,” he says. “This kind of dough, it’s really soft. It can’t hold that kind of weight. I make the pizza for you, and I decide the combination. And I think that is better for the pizza maker, too. If you go to a sushi place, you never ask the chef to make a change. Why in a pizzeria do people want to do that?”

With more than 50 pizzas on the menu, one would assume that Kesté needs a lot of kitchen space to store ingredients. Instead, many products are cross-utilized and Caporuscio keeps a close eye on waste. “Because we are really busy selling pizza, we can turn over the ingredients,” Caporuscio says. “In New York, we don’t have much space and at this location the dough is never refrigerated.” They are able to get deliveries daily from vendors, and much is made in-house, including cheese. During our visit, Caporuscio urged us to sample both homemade mozzarella and burrata, which was still warm from the cheese-making process and literally melted in our mouths. What he can’t make himself –– such as the smoked mozzarella –– he imports from Italy. Aside from cheese, dough and sauce are also made in-house. The dough never hits a cooler and has a two-day proof process.

Caporuscio also recognizes the need to stay current and recently added four new pizzas to the menu. Kesté began offering gluten-free pizzas a couple of days a week but expanded that to daily offerings to meet rising customer demand. (Because the pizzas bake in less than two minutes, they’re able to turnover tables fairly quickly, but people are willing to wait. Delivery is available.)

Although Caporuscio teaches a classic way of making Neapolitan pizza, he recognizes that it can’t be exactly the same everywhere he consults. Operators have to adapt to climate, humidity, water issues and other challenges when formulating their own recipes. “I am very happy now because all these pizzerias, they do very well. They are very successful. That’s the beauty of teaching people –– everybody gives you something, and that makes you better when you teach next time,” he says. “Everyday I come here, I try to learn some more. I never finish. Every day is something better. That is a goal you have to have for the customer –– to be better every day.”

In February 2012, Caporuscio partnered with his mentor, Naples-born Antonio Starita, to open Don Antonio by Starita in Midtown. Don Antonio is one of the first pizzerias to prominently menu a montanara pizza, which has a lightly fried dough. That location has a little more room, so they are able to store any leftover dough. Caporuscio is on premises at both stores nearly every day (Starita travels back and forth between NYC and his renowned pizzeria in Italy), but he has confidence in his pizzaiolos, and hosting his Neapolitan pizza classes has taught him how to manage people and hand off a little control. Kesté and Don Antonio occasionally share staff, but Caporuscio says dough handling can differ even just a few miles apart.

One of the company’s pizza makers has only been with them for a few months but is already putting out some of the best pizza in town, Caporuscio says. The key? Training. When he holds Neapolitan pizza classes, he encourages owners to send themselves to train rather than a manager or line cook who could be at a different shop within days of returning. He teaches students to stretch 100 pizzas a day, and says there are plenty of people who enter the industry who have never stepped foot in a kitchen but are still successful.

And even though more Neapolitan pizzerias are opening across the country –– and especially in New York City –– Caporuscio doesn’t consider them competition. Instead, they have fostered a greater understanding and appreciation of Neapolitan pizza as a whole not only in the United States but as far away as South Africa and Australia.

Although Caporuscio has no immediate plans to open another restaurant in NYC, he and Starita were presented with the opportunity to expand to the South. A new Don Antonio by Starita is scheduled to open this month in the Buckhead section of Atlanta. Neapolitan pizza, it seems, is less trend, more lifestyle. “Look, every pizza is good,” Caporuscio says. “Neapolitan pizza is better if people want something that is more historical, more authentic. “Because the economy is so bad, people cannot afford to spend $50 for lunch. But they can spend $20, and they want better quality ingredients on top of their $20 pizza.”

Kesté Pizza & Vino chef/owner Roberto Caporuscio is quick to mention his daughter, Giorgia Caporuscio, who came to America to learn English but instead followed in her father’s footsteps into pizza making. Giorgia is forging her own success, and recently won first place in the classic pizza category at the 12th annual International Pizza Competition. (She is one of only two women who have ever won.)