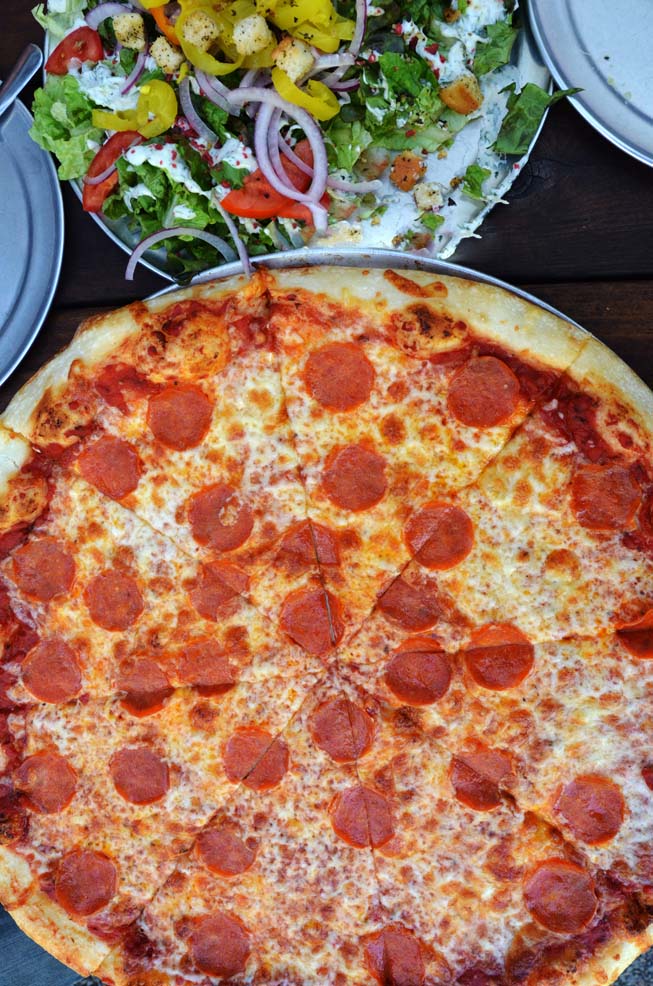 From supersized value meals and Big Gulps to 31-ounce coffees and oversized SUVs, everything these days seems bigger. Does bigger mean better? According to pizzeria operators when it comes to pizza –– the answer is yes.

When Momo’s Pizza and Brew Pub in Tallahassee, Florida, began selling 30-inch pizza and slices only a handful of shops offered such a large size.

“The atmosphere and the large pies made our shop very unique to the area. It became very popular very quickly,” says Josh Webster, kitchen manager at Momo’s Pizza and Brew Pub. “There is a certain amount of novelty, ease and affordability that comes with it. It ends up being cheaper more times than not picking up one oversized pizza as opposed to picking up two 14-inch pies to feed the family.”

To accommodate his pizza’s size, Webster had boards custom-made from a local craftsman. “While you can find peels in the 30-inch plus range we make sure to keep the weight down by using lighter woods,” he says.

“Oversized pizzas are gaining in popularity mainly because of how good they are for parties where you have a lot of mouths to feed,” adds Chet Leser, who co-owns Chet & Matt’s Pizza with his brother, Matt, in Sandusky, Ohio.

Sandusky may be home to Cedar Point, which hosts some of the world’s largest roller coasters, but the city has another large attraction. Chet and Matt’s Pizza offers the King Kong, a 29-inch round pizza, built to serve eight to
10 people. (However, seven pairs of people have managed to take on the restaurant’s two-person challenge by eating it all in 30 minutes or less.)

“I once saw a 29-inch pan in a trade magazine and realized that our ovens could accommodate a 30-inch pizza so we thought ‘Why not?’” says Leser.

Producing such a large pizza, Leser continues, isn’t much different than producing a 14-incher. “You apply the same principles. The trick is finding the correct amount of dough to use in the pan so it cooks exactly like a smaller pizza,” he says.

At this part take-out counter, part trendy rock n’ roll pizza joint 30-inch pies and slices are a late-night favorite among locals as well as a must-try for vacationers. Pizza options include the White Sabbath (mozzarella, ricotta, Parmesan and feta), Green Day (spinach, basil, parsley and ricotta) or traditional Italian sausage and pepperoni.

Dide admits working with the pizza’s three pounds of dough can be overwhelming. “The biggest challenge is making sure the dough is stretched and spread evenly throughout so there are no holes or extremely thin segments on the pizza,” he says.

Scott Anthony, owner of Punxsy Pizza in Punxsutawney, Pennsylvania, carries the Chief, a 24- by 12-inch pizza he created after watching chains push standard 14-inch pizzas for years. “It wasn’t the best buy and usually not enough to feed a family. When they did a larger-size pizza it never took off and that puzzled me,” he says.

He decided to create his own signature extra-large pizza using 30 ounces of dough, 8 ounces of sauce and 15 ounces of cheese. A company Anthony met at Pizza Expo specially produced a non-stick rectangular disc for him.

“I can still keep my food costs in line and make this signature pizza the one with the highest contribution margin,” he says.

However, it’s not just extra discs and dough that operators need for oversized pizzas.

“You need production capabilities,” says Anthony. “A deck oven will only hold three per deck, so a standard 30-inch conveyor oven is usually a better option.”

There are also large boxes to procure. Both Anthony and Dide order custom-made boxes.

Once you have the box does delivering such large pizzas become an option?

“Yes, of course!” says Dide. “We love the reaction our delivery team gets as they scooter down Collins Avenue with a box that large. The best part is them trying to walk out and having to tilt the box to get it out the door. Pizzas this large are great for big parties, local league sports games, etc., so it is essential to offer them as delivery.”

Anthony specifically markets oversized pizza to families and large groups that want home delivery. “Since this is our signature item, we generally market this towards families, non-profit groups and occasions where people get together such as the Super Bowl or holidays,” he says. “It’s a great value and it is easier to split the pizza into portions with different toppings so the whole family is happy.”

However, delivery is not for every operation. “About 10 years ago I fronted another oversized pizza shop that offered delivery. After the first year we stopped because the volume was becoming so much that we could not keep our ovens hot through the night,” says Webster.

For the most part, today’s society wants the most “bang for their buck.” Oversized pizzas are right on trend with this mentality.

“Why get a small pizza for dinner when you can order an extra-large for tonight’s dinner, tomorrow’s breakfast and lunch?” asks Dide, who already knows the answer.