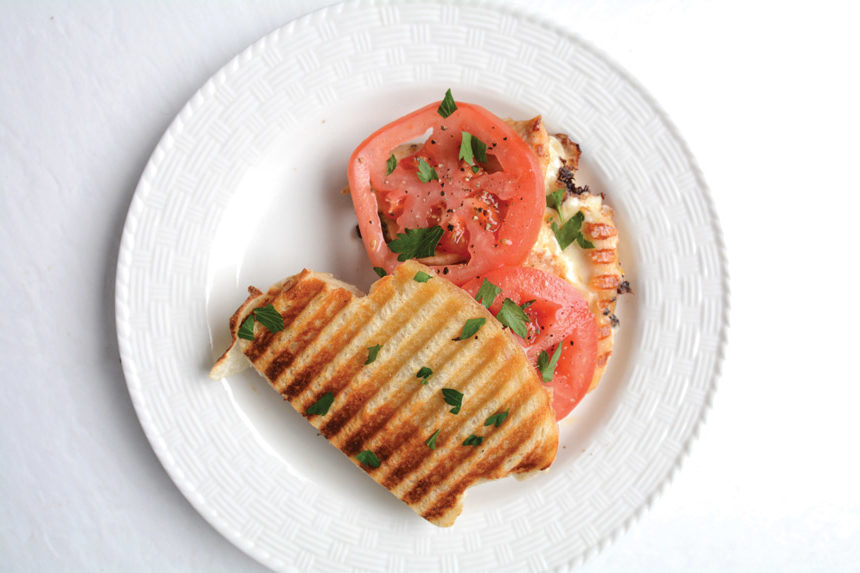 Hot Off the Press

Hot Off the Press

he panini sandwich is one of those foods that produce a “double-take” after the initial bite. It’s just natural to look down in amazement at this thin-ish flavor bomb and wonder why you don’t eat these at every meal. This is because the panini transcends the traditional sandwich attributes by pushing crunchy-hot texture to the front of the line, followed by a gooey and meaty center — making this a sandwich to remember.

The history of the panini press is muddled. In the 1920s, Thomas Edison created what he called “Sandwich Grill” of two hinged steel plates that heated up bread. It was discontinued in 1934 due to the great depression. Panini have been referenced as a ‘pan warmed Italian sandwich’ in 1956, and in the 1970’s Breville created what we know as the panini press. It was at this time that the panini became very trendy in Milanese bars as office workers and teens flocked to the fast sandwiches. This new, hot sandwich trend didn’t stop at the water’s edge. The need for panini migrated to the United States in the late 1970’s and continues today.

Classic Italian panini may seem skimpy by American standards. These panini usually never have more than one protein and no dressings or mayo. Large portions of meat or cheese would be considered overpowering by most Italians. Here are some classic Italian filling combinations and some regional specialties:

In this era of fast-serve, fast-casual, home food boxes and heat and serve, we, as restaurateurs, must distinguish ourselves with a stellar product and serve it fast. The time of hand-buzzers and long lines has passed and a major point of value for today’s customers is speed. The Milanese bars were the forerunners of this fast, delicious movement because their sandwiches were already prepared and ready to simply be heated up. To prepare for your fast lunch and dinner panini rushes, you must have a great panini grill. Here are some suggestions.

Flat versus grilled: Flat panini presses do not exhibit the grill marks that are a show of finesse in the panini industry. The flat presses also tend to cook unevenly and leave a black or dark brown skid-mark on crusty, hard-shelled breads like baguette and ciabatta. I’ve found that some employees may start using the flat grills for pancakes, hamburgers and crepes. This will lead to a big, unsanitary mess.

Dual Press: There is nothing worse than waiting for your panini while you see the press top being opened time and time again for other sandwiches. This is where a split-top or dual panini press saves the day. Dual panini presses can enable you to cook two or more types of panini at different temperatures at the same time.

Even Cook: Professional panini makers have heavier lids that are counterbalanced for an even cook. You’ll know you have a good panini press if it cooks evenly anywhere on the grill.

Here are some combinations that panini restaurants are making today. Because today’s customers are more in tune with culinary trends, sauces, fried foods, stuffed greens, pestos, nuts and even fruit can be found in successful panini restaurants. Here are a few.

Piri Piri refers to the fiery African birds-eye chili pepper which has been used in a garlicky sauce and marinade since the 15th century. This sauce is purportedly Portuguese in origin but the people in South Africa, Namibia, Mozambique and Angola have claims on origin and recipes that vary widely. I just love making this sauce for my heat-seeking customers because it is perfect on a vegetable and chicken pizza. If the recent trend toward hot chicken sandwiches continues, this panini is bound to be a game changer. You can substitute red Cayenne, Arbol, Manzano or Serrano and adjust the heat from there.