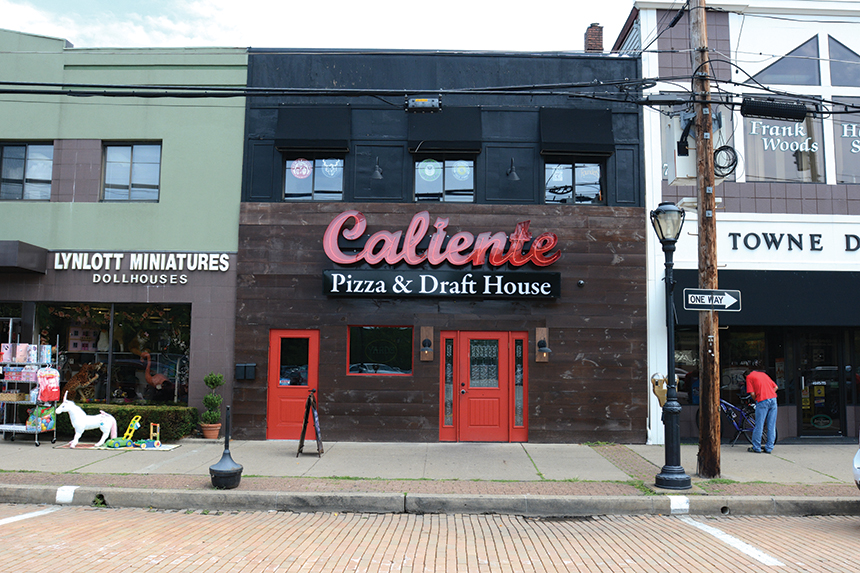 Nick Bogacz is the type of pizzeria owner who’d drive across town to pick up a couple of writers who’d gone astray. In the process between the wrong location and right, we learned much about this four-unit store that’s making strides in Pittsburgh’s neighborhood-centric locations. Bogacz’s units opened in 2012, 2014, 2016 and 2018, grossing more than $6 million annually for four stores.

Bogacz has been making pizza his whole life, cutting his teeth at local chains and then at some national chains, where he learned the operations needed to open and operate his own pizzeria.

“I wasn’t really old enough to get in all that growth,” he says honestly, “but I saw all that growth. I never really wanted just one store. I think that was part of it.

“Working for the corporate guys, I got a lot of good structure.”

With sales as his biggest niche, Bogacz would send out his drivers daily with $30 worth of pizza and allow them to sell to construction sites, big-box workers and road crews right on the spot. The response? Instant gratification for customers — and easy money in the till.

It’s been a long time since his chain-store days, when Bogacz was content making money for his employers. Today, he looks for locations that are actually failing, with cool spots but the wrong feeling or employees.

“I wanted ‘destination,’” Bogacz says. “The whole thing for me in all my pizzerias has been sales. You have to be able to put people in your stores. The thing that was tricky here was everybody opens up and says ‘I have the greatest pizza.’ I never wanted to say that. I just wanted to get in there and see what happens. … I feel like we put a lot of pride in what we do.”

When Caliente first opened in 2012, the craft beer boom had just begun to go regional. Bogacz says he began working with local breweries for symbiotic relationships.

Bogacz says he began driving to Philadelphia “because they get a bunch of beer we don’t get in Pittsburgh. By just getting everyday beer they get in Philadelphia, like Firestone Walker from California and some others that they bring into Philadelphia because (it is) so big” they raised their profile.

Craft beer has since become a large component of the company, “and I didn’t know anything about craft beer,” Bogacz admits. “I started looking at all the shops around and asking ‘hey, the top five beer bars in Pittsburgh –– what do they have on? What’s on their draft list?’ Then I started asking for those kegs.”

Bogacz would load up a Suburban with specialty beers and transport it back down to Pittsburgh, ensuring Caliente was getting brews his competitors wouldn’t take the time to source. The result? Lines out the door on certain beer nights and a whole slew of word-of-mouth publicity. The ability to bring in popular beers not normally found in Pittsburgh also brought in new customers.

He sponsored a craft beer week, “and we were still growing,” he says.

When he went to International Pizza Expo for the first time, Bogacz discovered that “being a corporate guy for so long, I didn’t understand the fraternity of the independent pizza shop,” he says. “My niche is marketing. You have to be able to put people in your stores, without a doubt.”

Bogacz recalls his early days, when everyone –– including himself –– expected to board the $9.99 pizza train. “When you see what a case of cheese costs, that’s when you realize you can’t do that $7.99 pizza. I think as we grew, I wasn’t afraid to print new menus every six months.

“We had probably a way higher food cost than I would have liked to have had in the beginning. … I learned breaking down food costs (and) labor costs.”

Bogacz wanted to set the tone for Caliente early on. It wasn’t a bar, but alcohol sales attributed to 30 percent with food accounting for 70 percent. Keep it fun, keep clean and keep it classy. Most of the stores do between three and four hundred deliveries.

Uber Eats has taken some business, but “it’s not like ‘Hey, it’s pizza night.’ Now it’s ‘Hey, it’s Uber Eats night.” Bogacz says. He estimates that he sells an additional $2,000 a week from Uber Eats. “If one person craves a wing sauce, then everyone is eating wings,” he says.

Part of Caliente’s story is the uniqueness of finding Bogacz’s locations. “We usually try to use as much as we can,” Bogacz says. “Part of the story is definitely how I’m buying the stores, because it’s non-traditional. Most people will go get the business loan, or they’ll have some money or they’ll borrow some money. What I’ve been doing is going in and trying to find a place that is failing. They just want to get … out of here.”

Bogacz offers a chunk of cash at the start and then asks the owners to help pay the rest of the debt over time, without involving banks. Two of his stores are already paid off using this method, with a third nearly completed. (He also asks the previous owners to stay on site during inspection. That way they can prove the business was running as is just a day or two before.)

In the beginning, wife Angie took over the front of the house with Bogacz in the kitchen. Bogacz soon sought the advice of his friend, chef Eric Von Hansen, for help when formulating his menu as they had two stores and realized how helpful having someone with a culinary background could be –– even in a place that features beer and pizza.

When Von Hansen joined the team three years ago, Bogacz had a list of goals, “and one of those goals was (to) go to Pizza Expo and win,” he says. Surely such a move would put Caliente on the map.

And win they did –– Von Hansen took home the first-place win in 2018 in the non-traditional category for his Wagyu Beef Truffle Fromage pizza, which combines his fine dining background and Caliente’s pizza focus. Previously, Von Hansen placed with a duck pizza that eventually taught them to add a thicker crust pizza on the menu.

Beyond pizza, their rolls are extremely popular: 10-inch dough cut into six pieces with toppings inside and garlic butter and cheese on the outside.

As Bogacz checks off his company’s “to do” list, they’re streamlining their operations and publishing manuals in anticipation of growth. There’s a managers’ meeting once a month with a set location, and such organization can be a “game changer” for a company of Caliente’s size. Although draft beer plays a big part in Caliente’s business, Bogacz is adamant about not being a bar. “I think first we made sure we didn’t have that atmosphere,” Bogacz says. He wants families to be able to enjoy their pizza right alongside those enjoying a beer and wings.

When they buy a new location, it doesn’t sit there gathering dust for six months. Within four days they can have it ready to reopen, but they’ll also refresh their current locations occasionally.