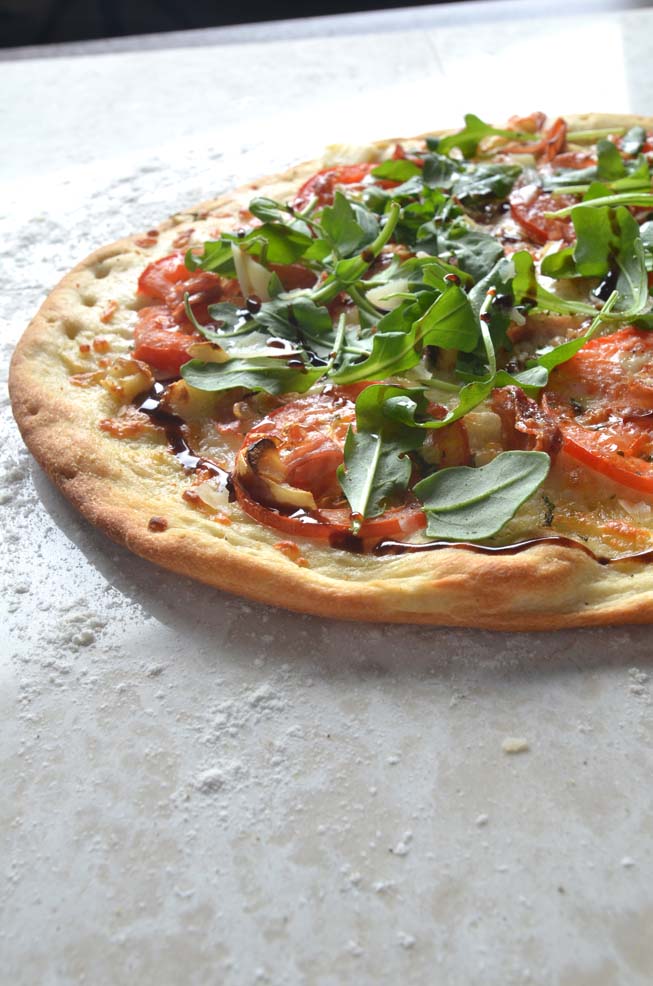 Years ago, the late, great Pat Bruno, who spent decades as Pizza Today’s resident chef, predicted the rise of white pies — that is, pizzas without a sauce. Today, sauceless pizzas become mainstays on pizzeria menus.

Sean Bullock, owner of Smoking Monkey Pizza in Renton, Washington, has broken the sacred pizza rule, offering six pizzas without a hint of a sauce, and he doesn’t plan to stop. “Deep within the hidden catacombs of our secret underground pizza research facility, we have found that no sauce pizzas allow the flavor of our high-quality ingredients to shine rather than be covered up by a sauce,” he says. “Pizza with personality, pizza with character — this is what we strive for at the Smoking Monkey.”

Two of the brick-oven pizzeria’s most popular pizzas are of the “no sauce” variety. The Goatsmary features chili-infused olive oil, cashews, rosemary, provolone and goat cheese. The DTR is topped with olive oil, D’Anjou pears, smoked prosciutto, house-made mozzarella and Gorgonzola.

Bullock is quick to recognize the power of his most-ordered pizzas. Sauceless pizzas do not sell as well as a pepperoni or supreme at Smoking Monkey, he admits, “there is a market for the adventurous who are willing to walk off the beaten path.”

OTTO, with nine units in New England, has also found success with creative, sauceless pies, bucking the most beloved pizza standings. “Three of our most popular pies are sauceless, says Eric Shepherd, director of marketing and communication at OTTO. The pizza company’s Mashed Potato, Bacon and Scallion pizza made Food Network’s “50 States, 50 Pizzas,” calling it the perfect combo. (This recipe is available in the recipe collection at PizzaToday.com.)

Two other customer favorites at OTTO include the Butternut Squash, Cranberry & Ricotta and the Pulled Pork & Mango. “We’ve had good success with salty and sweet,” Shepherd says. “For example, our bacon, red onion and apple pizza.”

OTTO has found a key ingredient to keeping its “no sauce” pies from drying out. “We use heavy cream to keep our white pizzas just as juicy as our sauce-based pizzas,” Shepherd says.

Sauceless pies make up 15 to 20 percent of food sales at Bella Roma Pizza, in St. Cloud, Florida — like The Pizza Frozinone with its flavor fusion of prosciutto, cheese combination and emphasis on fresh produce (see the recipe on page 48). “It’s almost like a cult following, says owner Alfredo D’Alessandris. “People come in every week for that pizza.”

A native Northeasterner, D’Alessandris says, the toppings that he loved as a kid like spinach and broccoli have not been top sellers with his central Florida patrons. But when his sauceless Clam & Bacon pizza hits his specials menu, Bella Roma customers eat it up, literally.

D’Alessandris says his Bruschetta pizza is the perfect ying and yang for a pizza devoid of sauce with its vine-ripened tomatoes, basil, onions, EVOO and mozzarella. He balances the pie with a 10-1 ratio of its tomatoes to the rest of the toppings.

When crafting your new, decadent pizza without sauce, keep in mind these three helpful tips:

Spread mozzarella cheese evenly across dough. Sprinkle on fresh basil. Top pizza with ripened sliced tomatoes across the pizza over the fresh basil and mozzarella. Tear the thinly sliced prosciutto and evenly distribute over the tomatoes. Sprinkle on grated pecorino Romano cheese and a pinch of dried oregano. Bake at 550 F for 7 to 8 minutes.

Once pizza is baked to a golden brown perfection remove from oven and top with a handful of fresh baby arugula, fresh cracked black pepper, shaved Italian cheese mix and
finally drizzle the extra virgin olive oil and balsamic glaze across the pizza. Cut and serve.