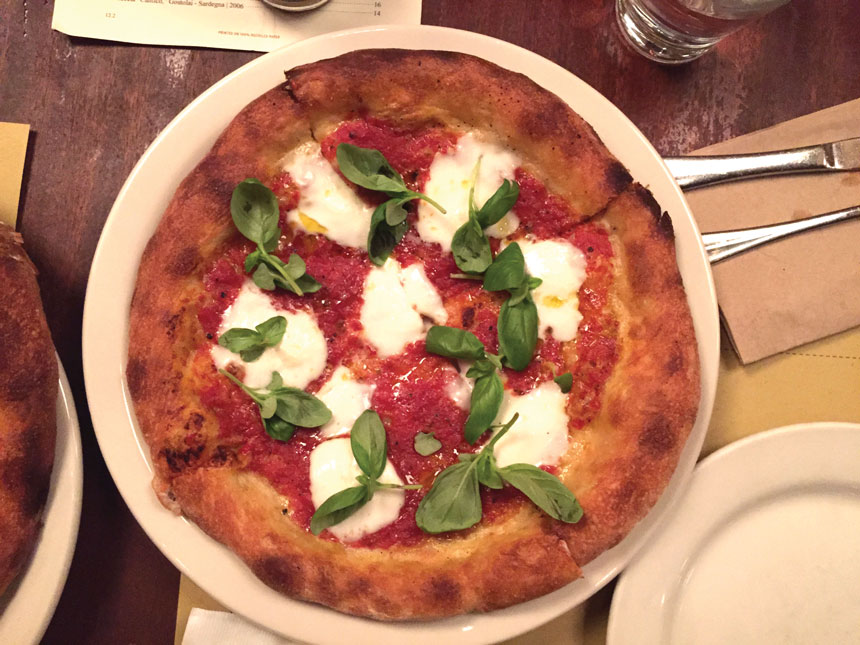 Man on the Street: “Livin’ On the Edge”

Man on the Street: “Livin’ On the Edge”

If you’re paying any attention at all, you know that the best pizza makers spend their time chasing the perfect crust. Funky topping combinations might get the Internet’s attention, but they’re not winning anybody a James Beard award. Pizza makers used to flaunt their skills by concocting confounding combinations, but now it’s becoming all about that base. The problem is that the fruits of fermentation are essentially invisible to the common customer, who doesn’t see past the mounds of mozzarella and piles of pepperoni. But that’s all starting to change as pizza makers flaunt their dough development by beefing up their pizzas’ borders.

In Naples they call it cannoto, which means “life raft.” If that doesn’t paint a picture of the extra-puffy crust I don’t know what will. The outer rim is even more dramatic than a standard Neapolitan pizza, with a cavernous crumb structure that makes perfect fodder for the nerdiest pizza and bread geeks on social media. A pizzaiolo achieves this affect by a combination of extreme hydration and controlled dough extension. More carbon dioxide is left in the dough’s edge than usual, so the initial moments of oven spring provide a huge inflation – just like a life raft.

The cannoto style is being ushered by Napoli’s young generation of pizzaioli, who aren’t afraid to (literally) push the world’s most sacred pizza tradition. Forging a ballooned crust is a way to show off one’s elevated skill, but sometimes looks can be deceiving. I recently had the opportunity to try the cannoto in Naples and found quite a disparity in the results. Some exhibited the plush openness I expected but others were severely undercooked. While the edge always delivered its promised pop, the area directly under the sauce often remained uncooked. This wasn’t just a gum line; it was a goo line. Herein lies the danger of baking high hydration dough in a super-hot oven.

American pizza makers are also getting into exaggerated crusts, but with the opposite result. Pizzeria Mozza should be heralded as a pioneer in the style, having introduced it on opening day back in 2007. When I first visited Pizzeria Mozza about a decade ago, the incongruous proportion of crust surprised me. Now that I understand Mozza’s pizza as the descendant of founder Nancy Silverton’s bread empire, but I completely understand customers feeling cynical about a pizza whose edge encroaches on its toppings. Unlike the pies in Naples and at Mozza, large format pizzas like those found at Brooklyn’s Lucali and Mama’s Too in Manhattan can deliver the same thickness of edge crust without entirely invading the pizza’s central real estate.

Since American pizza styles tend to have longer bake times in lower temperature ovens, they have the opposite problem of their Neapolitan counterparts. Oversized un-topped borders can dry out, especially when the dough is handled aggressively. This makes for crusts that snap when folded and get left behind on the plate. Once again, the enticing visual appeal of a monster crust comes with some serious caveats.

While pizza makers compete for the corniccione crown, it’s important to remember the pitfalls of doing so. While a valiant attempt to highlight the often-overlooked importance of well-made dough stretched into a perfect skin, emphasizing a pizza’s border has the potential to result in a pie whose success is overshadowed by the pizza maker’s desire to flex.