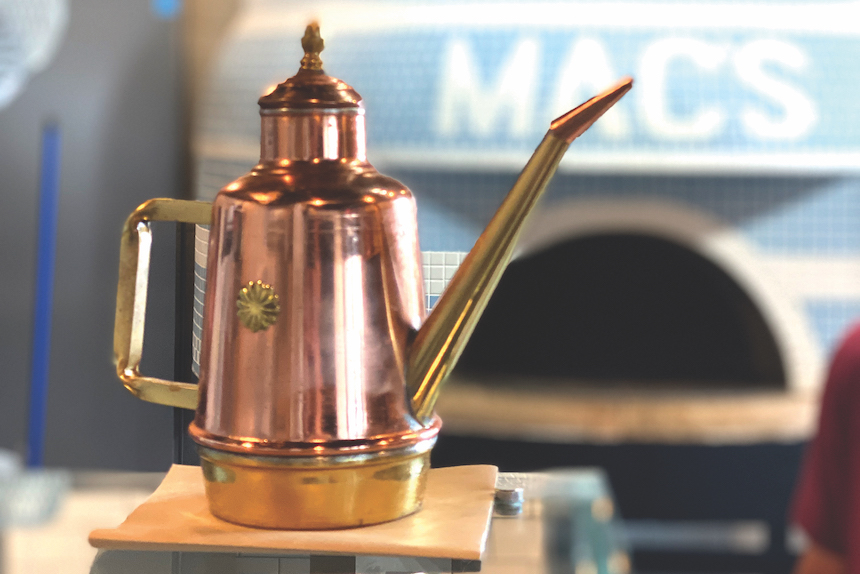 Man on the Street: Olive Oil Is About to Get Cool

Man on the Street: Olive Oil Is About to Get Cool

Have you ever seen a magnum of olive oil? I hadn’t until last week, when I spotted one in the hands of a mysterious bearded man in a Brooklyn pizzeria. This wasn’t just any mysterious bearded man, of which there are a great many to be found inside Brooklyn pizzerias … this was Nicholas Coleman. After serving as chief Oleologist at Eataly for several years, Nick went on to preach olive oil gospel at renowned culinary institutions around the planet. Now he runs “a bespoke full-service olive oil procurement center,” which sources oil from across the globe for large clients and individual customers. When I met Nick, he was dropping off a fresh bottle of olive oil he designed in collaboration with rapper/TV star Action Bronson.

That’s right. Olive oil is about to get cool.

Pizzerias have been treating olive oil like an anonymous commodity for years, but there’s an incredible amount of potential that’s only beginning to come to fruition. In the past, all anybody ever cared about was whether or not the label said extra virgin, but that’s barely an indicator of anything. As I learned from master olive miller David Garci-Aguirre, the requirements for extra virgin are so broad it’s like bragging about passing a test when you only got a C-.

Have you ever sipped your olive oil? Try it right now. Does it tickle the tongue or does it burn the throat? The latter means that your oil has gone rancid. At the very least, your oil should taste good. It should taste like olive.

Olives are fruits, so we really need to think of olive oil as fruit juice. It’s best when fresh and declines with exposure to heat, light and air. Olive oil goes rancid after 12 to 18 months, so look for a packing date on your label. Then be sure to store your supply away from heat and light. You probably blast through containers of oil faster than they can spoil, but home cooks often don’t realize that once a package is opened they need to consume their oil within a few months.

In pizza, we tend to value a connection to pizza’s Italian origin, but quality olive oil isn’t restricted to the boot. Spain, Greece, Italy and Tunisia are all huge producers, but check your bottles and you’ll probably see a blended oil even if marketed as Italian. That’s why you really need to go with taste instead of relying on marketing language on the label. California has some excellent oil right now with an industry some say will echo the state’s success with wine. The southern hemisphere is emerging as a major player, with excellent oils coming from Argentina, Chile, Uruguay and Brazil.

I remember judging a pizza competition in Harlem a few years ago that pitted 50 Margherita pizzas against each other over the course of two days. You’d think it would have been hard to discriminate between one pie and the next, but I clearly remember the moment I encountered the winner. The most obvious difference was the quality olive oil the pizzaiolo used to finish the pie. Had he used an inferior oil, the pizza would have been indiscriminable from its competitors.

As all pizza makers continue to up their fermentation game, their tomato sourcing, and their cheese selection I truly believe that quality olive oil will emerge as the quiet hero of pizza flavor.