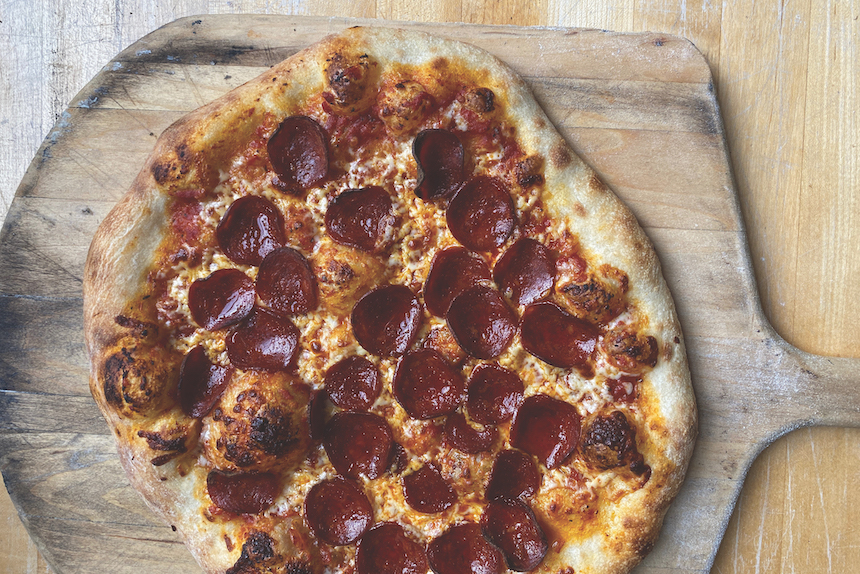 Man on the Street: Pepperoni Scare

Man on the Street: Pepperoni Scare

It’s without a doubt the most popular topping in America. A common stat claims that it’s on at least 36 percent of pizzas eaten in this country. Nearly every image of pizza on t-shirts, menus, and logos features it. The sheer ubiquity of it is why recent headlines warning about a massive pepperoni shortage caught me by surprise.

As popular as pepperoni is today, it wasn’t long ago that the spiced cured salami was nonexistent in pizzerias. Just last weekend I found an old wall menu from a pizzeria in upstate New York, probably from the 1940s, showing options for pizza with cheese, anchovies, sausage and mushrooms. No pepperoni at all. A 1940s menu from Mario’s Restaurant on Arthur Ave. in the Bronx also omits pepperoni. A 1930 menu from Sally’s in New Haven offers pizza with anchovies, bacon and even chicken — but no pepperoni. The earliest pepperoni advertisement I’ve found is from 1913, in which Gamba Bros (“The Leading Meat Market”) in Osage City, Kansas, refers to a luncheon meat as Mortadella Pepperoni. More ads appeared in 1920 for Casserta Pepperoni in Massachusetts and Alabama. While we can’t be sure these are the same product we enjoy on pizza today, it seems more likely than not. Those looking for America’s favorite topping in Italy will be out of luck. It doesn’t exist. Ordering peperoni will get you bell peppers, not the spicy smoky salami we hold so dear. Though there are spiced salami products throughout southern Italy, pepperoni is clearly an American invention.

It’s unclear exactly why pepperoni became the topping of choice in the U.S. but its popularity quickly escalated in the latter half of the 20th century. It’s flavorful, shelf stable, inexpensive, and visually appealing. The recent return of natural casing “cup and char” pepperoni has even birthed somewhat of a pepperoni renaissance! Pepperoni is such an essential, we now have vegetarian and vegan versions made with meat surrogates. Heck, I just saw a video of Rachael Ray simulating the flavor of pepperoni by coating slices of squash and zucchini with pepper, granulated garlic, mustard seed and fennel.

Some independent pizzerias have been experiencing increases of 50-100 percent thanks to the perfect storm that is COVID-19. According to Bloomberg, pepperoni supplies are low because its manufacture is complex and margins too slim to make it a priority. Workforce interruption back in April led meat companies to focus on unprocessed meat cuts that require less energy to produce. Combine that with an increased demand from home-bound pizza lovers and it’s easy to see why there’s a problem.

If we do have a pepperoni apocalypse on the horizon, I think we’ll be able to manage. To get the same blast of contrast we get from discs of red on molten cheese, I think there’s opportunity to be found by getting back to pepperoni’s roots with peppers, particularly the spicy varieties. Up your game by pickling your peppers to add an acidic punch. You can approximate the smoke and heat of pepperoni by employing seasonings like paprika, cayenne, garlic, and pepper flakes to other meats or even vegetables. Who’s going to be the first to market a pepperoni-tinged Bloody Mary?

While I don’t think this supply chain blip is going to become a serious issue, it is worth taking the opportunity to explore the potential of pepperoni flavor beyond the real thing.