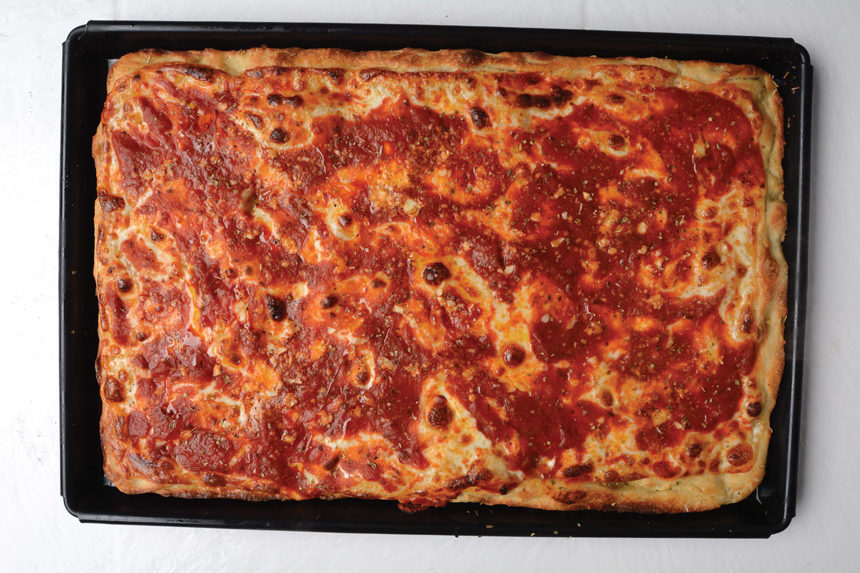 Man on the Street: “Sauce On Top”

Man on the Street: “Sauce On Top”

The world’s highest rated pizzeria is doing it all wrong. Literally. The flagship pie at Pepe in Grani, located just 30 km north of Naples, is called the Margherita ha Sbagliata, which means “Margherita Made Wrong.” Among the pizza’s multiple abuses, perhaps the most egregious is its application of tomato on top of the cheese. Most of humanity expects pizza to follow a reliable pattern: dough as a base, covered with tomato sauce, then topped with cheese and various accouterments. By swapping strata, the Margherita ha Sbagliata has caused quite an upheaval in the Italian pizza community. Meanwhile across the Atlantic, American pizzerias have seen the trend of sauce atop cheese simmering for decades.

Papa’s and Delorenzo’s of Robbinsville, New Jersey (both formerly located in Trenton) have been applying coarsely crushed tomato to the tops of their pizzas since at least the 1950s. They even see it as a defining characteristic, going so far as to refer to their pizzas as tomato pie. In the pizza stronghold of New York City, some of the oldest and most popular pizzerias have been layering in reverse since the 1920s. You’ll find the technique at John’s Pizzeria on Bleecker Street, Totonno’s on Coney Island, Arturo’s on Houston Street, and both Grimaldi’s and Juliana’s in Brooklyn’s DUMBO neighborhood. There’s even a 1956 New York Times Magazine article in which George Lombardi, of Lombardi’s Pizzeria, describes assembling his pizza cheese-first because, “it melts right that way.”

All the pizzerias I’ve referenced thus far produce round Neapolitan-inspired pizzas, but the most influential saucy pie of all time is the Sicilian pizza from L&B Spumoni Gardens. Since the early 1950s, L&B has been serving thick, square pizzas covered with crushed tomato and pecorino cheese. Whenever you see a Sicilian pizza with sauce on top of cheese, it’s a good bet L&B was the inspiration. Just take a look at the hyper-Instagrammed squares at Prince Street Pizza in Manhattan, the sesame-seeded Freddy Prince at Paulie Gee’s Slice Shop in Brooklyn, and the luxurious five-day fermented Sicilian at Metro Pizza in Las Vegas (it’s even called the 86th Street, the location of L&B). Speaking of squares, let’s not forget two of the biggest pizza style trends of the moment: Grandma and Detroit style. I genuinely believe that the exotic sauce-on-top look has boosted their popularity.

Applying sauce above cheese has some clear benefits. By using the cheese as a barrier between sauce and dough, you can prevent excess moisture from slowing the bake. Tomato also prevents dry cheese from burning. Think about how Chicago deep-dish pizza is topped by a thick layer of crushed tomato, without which the 40-minute bake might leave unprotected mozzarella charred beyond recognition. I think it’s possible that America’s early Neapolitan immigrants may have made the switch to troubleshoot the dry heat and lower flame of coal-fired ovens.

Beyond any practical justification, I also think that pizzas with visible sauce just look nicer. Overly cheesed pizzas carry the connotation of junk food to me whereas pies with upfront sauce look classy. What’s even better is the fact that tomato is much less expensive ingredient to feature, so pushing it to the forefront can even help your bottom line.

If you serve a pizza with sauce on top, post a picture to social media with #sauceontop and tell us why!