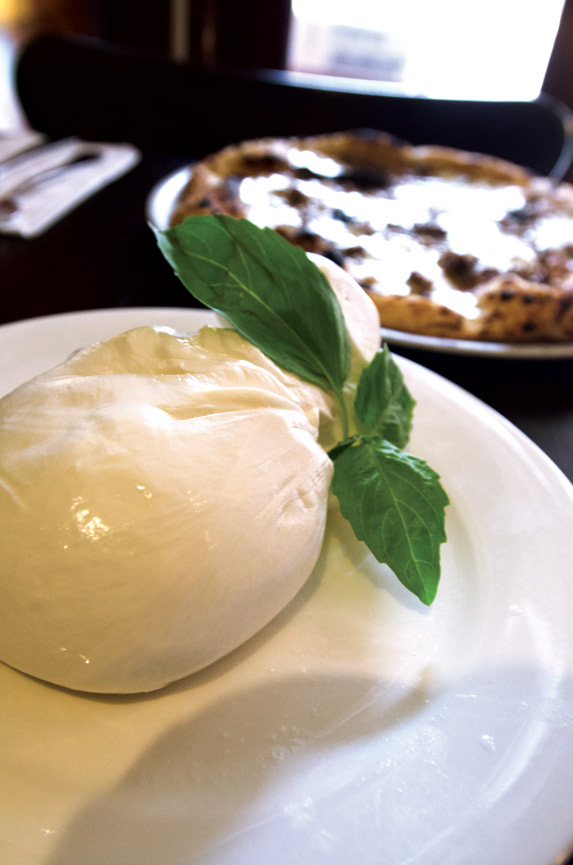 Man on the Street: Ooze or Lose

Man on the Street: Ooze or Lose

Burrata has become one of the world’s sexiest cheeses

When the Beatles played their legendary 1965 concert at Shea Stadium, most of the audience couldn’t hear a single note of music because of the din of teenage girls in full-on freak-out mode. I never thought I’d witness the same reaction to a piece of cheese, yet there I was having to pause my sentence to allow for the emotional and vocal reaction to the mere utterance of the word: burrata. Eyes glazed over and I was almost positive a drop of drool slipped from the face of a grown man. What is burrata and why is it quickly becoming the sexiest cheese in town?

Burrata is a cousin of fresh mozzarella, but with a major twist that earns it higher esteem. Back in the early 1900s, cheese makers in southern Italy decided that the best way to get rid of leftover scraps of stretched curd (known as ritagli) was to scoop them up into other pieces of freshly pulled curd. As it’s being formed, mozzarella is pulled around a mixture of ritagli and cream to form a cheesy water balloon of deliciousness. A top-quality specimen has an outer shell that’s just thick enough to contain its creamy contents. Historically, burrata was made from the milk of Podolian cattle in Apulia and Basilicata and eaten only locally on the day of production, but sourcing it has become easier as interest has exploded.

I’ve seen this creamy fresh cheese in several menu items at Italian restaurants and pizzerias. It can be served as an appetizer (accompanied by some slices of prosciutto and a hunk of bread), atop a salad of greens and cherry tomatoes, on a plate of pasta, or on pizza. Due to its high moisture content, burrata tends to make pizza soggy. Drying the cheese, as many do with fior di latte and mozzarella di bufala, doesn’t quite work with burrata because the wet interior is an essential part of the package. That’s why I prefer pizzas with burrata added after the bake.

Of all the different burrata presentations, I find the simplest to be the best. Serve it with some crusty bread and a drizzle of good olive oil and I’ll be in heaven. Most of the fun is seeing the creamy innards ooze onto the plate as the outer mozzarella shell is breached. When I lead pizza tours to restaurants that serve burrata, everybody gathers around to take photos and videos of the big reveal. There’s even an Instagram account called @burratagram that posts videos of burrata being cut open. It’s mesmerizing.

Despite its humble origins as a cheese whose purpose was to get rid of scraps from the mozzarella making process, burrata is now a luxury item. It takes center stage in any dish and is usually priced to match. If you’re interested in adding it to your ingredient arsenal, just be sure to use a product that delivers the smooth creaminess that will drive your customers crazy.