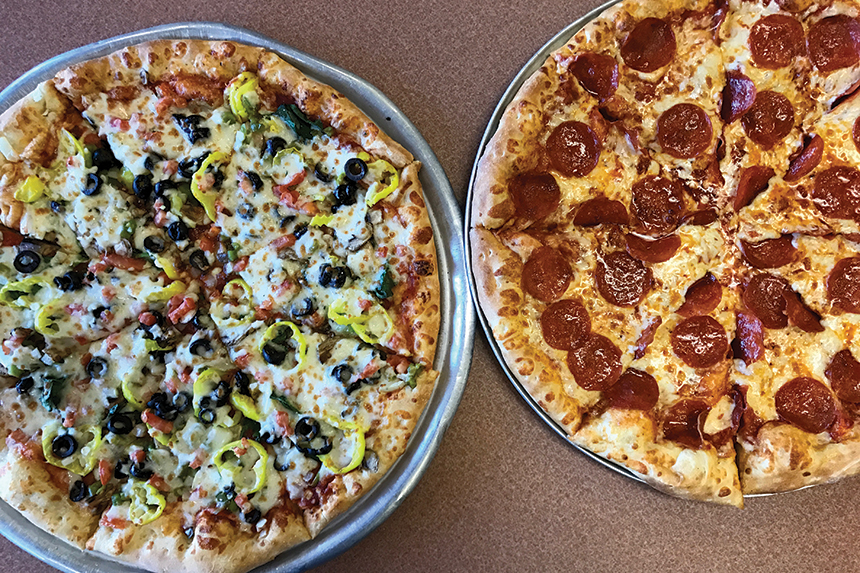 A Family that Grows Together…

When Pizza Today arrived at Stoner’s Pizza Joint in Midtown Savannah, Georgia in February, the restaurant was filled with smiling people wiping down tables and counters and mingling with one another. Some were employees but most were family and friends who have invested in the Stoner’s Pizza Joint brand. Greeted with kind Low Country hospitality, Pizza Today walked into a family, both literally and figuratively.

Joel and Jenny Harn own the 19-unit pizza company — eight being company owned. Joel is a modest man, but it’s clear to see that they have built a thriving pizza business from the ground up. And the brand is gaining momentum.

But it all started with one Stoner’s Pizza Joint. After working at Domino’s, Joel devoted his career to revitalizing struggling restaurants and selling them. There was something about Stoner’s that was different. “When we opened up Stoner’s we have some people come to us interested in what we were doing,” Joel says. “It just kind of rolled from there. It wasn’t something that we really planned, it just kind of happened.”

Joel, with the help of his father, set out to create an original concept. Joel reveals the unconventional way he came up with Stoner’s pizza dough recipe. From scratch pizza dough was a new challenge. “So we get my grandmother on the phone and we ask her, ‘how do you make pizza dough?’ She said, ‘well I’ve never made pizza dough before. It has the consistency of a dumpling recipe’ and she told us to add some yeast to it. That is our pizza dough. It’s been the same for 28 years.”

Joel enlisted childhood friend William Morris as operations manager to help oversee the day-to-day. “It’s like a mom and pop, but with a lot of cousins,” Morris says. And the Harns couldn’t agree more.

While the Harns were focused on operating their single store, Morris came to them with a proposal for a second location in Effingham, Georgia. Today, Stoner’s 19 units stretch from Savannah to Charleston with recent expansion into Texas and Florida.

The top performing store is located in Goose Creek, South Carolina, which is home to the Naval Weapons Station. “Goose Creek opens at 4 p.m. and goes until 10 p.m. It has no seating. It’s 1,100 square feet. Last year, they did $1.2 million.”

There’s competition for the No. 1 spot. Even the newcomer licensed location in Houston, Texas is vying for top sales. “They have been open for eight weeks now and their numbers have gone through the roof,” Joel says. “We look for that 30,000 household count and they have 57,000 households. So within eight weeks they are already the fourth or fifth best store in the company.”

That’s precisely the demographics the Harns are seeking when scouting new locations and franchises. “We’re looking for address counts,” Joel says. “Basically what we have built our model around is that we want at least 30,000 addresses within a five-mile radius that we can deliver to.”

Delivery is key as many of the Stoner’s locations offer only carryout and delivery. The Harns were able to incorporate a delivery system they used for a third-party delivery business they created years before.

The business has evolved since the Harns’ opened the first Stoner’s. They used brick ovens in the original Georgetown location and have made the switch to conveyor. “The two brick ovens that we had, we just couldn’t keep up with the demand,” Joel says. “So now we’ve come up with a unique concept of putting the bricks in the bottom of our conveyors. So it gives it a little bit more bottom heat, a little bit crispier crust.”

Another oven-related decision was to use conveyors for most cooking applications. “We’ve been in the pizza business almost 30 years,” Joel says. “We’ve had grills. We’ve had fryers. We’ve had all kind of cooking equipment in the stores. We got away from all of that and strictly to the pizza oven. Basically what we say is that if we can’t cook it in the pizza oven, we’re not doing it.” With exception, each Stoner’s has a smoker for its popular chicken wings, available in 10-, 20-, 40- and 100-piece, which are sauced and finished in the conveyor.

Limiting cooking to its conveyors hasn’t stopped Stoner’s from having an extensive menu of appetizers, salads, sandwiches, pizzas, stromboli and lasagna.

Roughly 75 percent of Stoner’s sales are pizza. Morris says top-selling pizzas are pepperoni and the meat pizza. The Taco Pizza is also popular with tomato sauce, beef and mozzarella and finished with lettuce, tomato, jalapeños, hot sauce and a side of sour cream.

With many locations not open for lunch, dinner makes up 80 percent of the business. Stoner’s offers extra enticement with lunch specials, like two slices and a drink for $3.99. The pizza company also offers complete meal packages, like the Super Deal — one large pizza with choice of five toppings, 10 wings and a two-liter of their choice for $22.99.

Key to Stoner’s menu mix is ingredient tie-ins. “Figure out what we already have in our kitchens and let’s grow the menu there instead of bringing new items in,” Joel says.

Direct mailing Stoner’s menu to its radius households has worked well for the business. “We buy about a million menus every few months for the company and then we send them out in the mail,” Joel says. “That is about 90 percent of our advertising budget.” Each location also has its own social media pages and some opt to do localized advertising on avenues like Facebook.

Stoner’s work environment is laid back and very successful, according to Morris. “If we hire an employee, it’s an investment. We try to treat them as an investment.” He has implemented a management-in-training program Joel designed to provide employees with advancement within the company.

How many stores do the Harns project? “When we opened our first store, we didn’t know we would have two stores,” Joel says. “Now that we have 19, I don’t know where the number is at. We are having fun. A lot of it is family-oriented. It’s growing and as long as it’s growing and everyone is having fun, we’ll see where it takes us.”