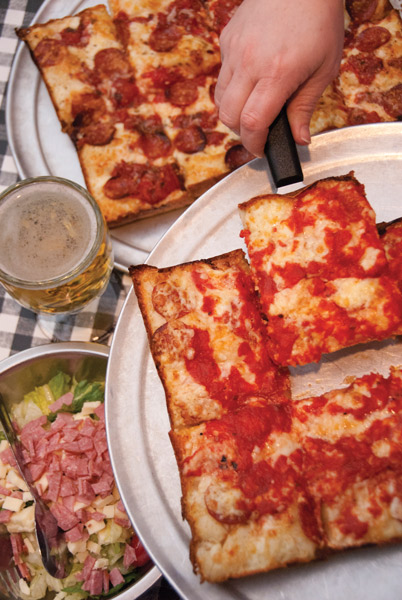 How to do Detroit-style pies in your shop

In the past couple of issues I’ve described my lifetime love of pizza and the value pizza has brought to me and my family’s life. While I have experimented with making many pizzas, Detroit-style pizza has become my hallmark. Not only does this style connect me back to my Detroit roots, I also think it has a superior taste.

Over the last eight years I have tinkered with how I make the style. Here are five basic principles that have constantly guided my overall approach:

The namesake of one of my restaurants, Blue Pan Pizza, is derived from the original pan used to make Detroit-style pizza. The “blue steel pan” was originally used in automobile repairs because of its ability to withstand extremely high heat.  Blue steel’s ability to endure high temperatures also made it the perfect solution for baking Detroit-style pizza.

When making your Detroit-style pizza, ideally, one should use the original 8- by 10-inch or 10- by 14-inch blue steel pan. However, in recent years, finding an authentic blue steel pan has become somewhat difficult. There are new pan types that have the same quality and durability of the blue steel pan. Additionally, these pans use metals that are a little safer for washing.

When thinking about which pan to use, consider not only the cost of the pans, but also your audience. For example, consider whether or not the goal is to make small personal pizzas or large pizzas.

Most important in choosing pans is being consistent with the pan you decide to use. Stick with the same manufacturer. Changes in the pan, because of the metals used, will affect the temperature used for baking and fermentation of dough. Consistency is key!

The original Detroit-style pizza operators, dating back to 1946, will go to their graves (or have already gone) saying the best and only way make dough is utilizing the raw bake method.

I consider myself a pizza purest, so I respect both methods of baking Detroit-style pizza dough.

The beginning of the par bake is the same as the raw bake.  After your dough has fermented in the pan, it is now time to par-bake. My goal in par-baking is to bake the dough to roughly 70 percent of the finished product. This method of par baking helps to create a solid structure that will in turn help to withstand the weight of the cheese, toppings and sauce.

At Blue Pan and Brown Dog Pizza we do all of our par bakes in the morning before we open for lunch. During busy times we will have to do a second round of par bakes after lunch for dinner service.

Looking at your baked pie, the bottom of the crust should be a gorgeous, spotted, golden-brown. The interior “crumb” should look like a loosely woven spider web.

Also like a spider web, when one picks up a slice of Detroit-style pizza it should seem light like a feather. Nonetheless, the structural integrity is strong despite its lightness. After picking up a slice it should remain level and not sag.

Biting into the pizza, there should be a nice crunch from the bottom, which should flow directly into a soft “pillowy” taste. The taste of the crust should ultimately remind the eater of warm, freshly baked bread that is slightly sweet.

Detroit-style pizza can be baked in any oven. Deck ovens were the original oven used to bake them. However, some of the most famous pizzerias currently utilize conveyor ovens.

Ultimately, use whatever oven you are currently operating. There is no need to go buy a new oven to experiment with Detroit-style pizza.

I use the deck ovens because I like the consistency of the pizza. I also like that I can control the bake of the pizza. I can rotate it, move it to “hot spots”, and I can leave it in as short or as long as I want.

Typically, Detroit-style pizza requires a higher temperature than New York or Chicago pizza. The standard is at least 550 F or higher.

When growing up, my grandmother would always say, “it’s in the sauce.” She was partly right.

For Detroit-style pizza, the real statement, rather the real question, should be: where does the sauce go?

While some pizzerias put their sauce under the cheese, the original placement of sauce for Detroit-style pizza is putting two strips of sauce, evenly spaced, on top of the cheese.

The next question is when should the sauce be applied?

Sauce is a heavy ingredient for the pie. When you apply the sauce, it should be based on the strength of the dough.

Unlike previous guidance, the right amount of sauce will be vital to baking a great Detroit-style pizza.

The great thing about caramelized cheese is that it can be done with many different types of cheese. Brick cheese is original to Detroit-style pizza. However, mozzarella, aged white cheddar and muenster cheeses are all used to great effect as well.

Aged white cheddar and brick cheeses are good to use around the edge because it caramelizes into a perfect, crispy, buttery crust. (Please be cautious when using Mozzarella as it burns quickly at high temperature.)

When applying the cheese, put 70 percent of the cheese around the edge and corners, then place the remaining 30 percent in the middle. As the pizza bakes, the cheese will slide to the middle because of the fats in the cheese.