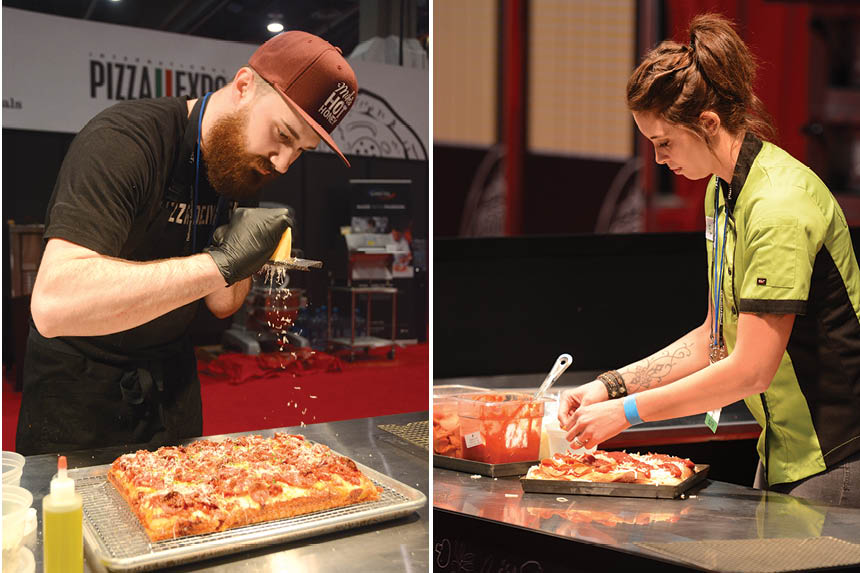 Being the rolling stone that it is, pizza has gathered no moss since first gracing America’s lips in the late 19th century. It’s clear that what was once considered the child of Southern Italy has now been adopted by every culture and destination. American pizza makers have been particularly diverse in forging their identity, evolving the Neapolitan bread into distinct regional variants across the country. With so much diversity, no single style represents all of American pizza. Instead, a common aesthetic among the country’s most exciting pizza makers is driving progress. Who are these pizza makers and what makes them stick out among the pack? It all starts with education.

Pizza schools didn’t exist until the late 1980s and they didn’t come to America until over a decade later. Now prospective pizza makers can seek instruction from at least a dozen schools, most of which offer certification in specific styles. Tony Gemignani, whose International School of Pizza was the first in the U.S. to teach American pizza styles, remembers the lack of resources when he got into the business in the 1990s.

“It was the Wild West. If you wanted to learn about something, you couldn’t just Google it,” recalls Gemignani. “The books that were out were very general. Nothing gave much detail because they were written by cookbook writers and not by pizza makers or bakers.”

Now the scope of information is much broader, so anyone interested can access reliable information with a few clicks or swipes. At Gemignani’s school, he sees an increasing number of students whose virtual exposure to foreign pizza styles inspires them to pursue their mastery. He credits the growth of regional variants like Neapolitan, Roman pizza al taglio, Grandma and Detroit to the broad access to educational materials.

On the flip side, we see a host of new wave pizza makers avoiding definition. Rather than sequestering themselves within a set of rules, they’re experimenting to achieve their own visions. Ingredient availability has expanded so sourcing is much easier and more exciting. Dan Richer, of Razza in Jersey City, New Jersey, has found this to be the key to creating a unique identity with his pizza.

“Let’s move away from buying what they want and switch to buying what we want,” he says about breaking free from the paint-by-numbers majority of the industry. That’s the idea behind movements like These Hands, which credits pizza makers’ personal decision-making power in their processes rather than leaving decisions to the guidelines of a known style.

Richer also finds inspiration from communicating with others in the industry. In the past, events like Pizza Expo were the only venues for exchanging ideas. Now pizza makers collaborate over Instagram and Facebook. These portals into each other’s processes have even transformed home pizza makers into professionals that have taken the lead in pushing the industry to new frontiers. Paul Giannone (Paulie Gee’s), Norma Knepp (Norma’s Pizza), Will Fain (Handsome Pizza), Scott Rivera (Scottie’s Pizza Parlor), Serhan Ayhan (Boston Pizza) and Nicole Russell (Last Dragon Pizza) all learned the craft by researching online. Now they’re gaining success and leading the way for others to follow in their paths. Their ability to push boundaries might be easier because of their lack of experience, not in spite of it.

Nicole Russell taught herself the basics but made her greatest improvements only after tapping into the knowledge of other industry leaders.

“I’ve had to figure out a lot of things on my own, but now I’m spending more time with experts learning about techniques, grains, cheeses, seasoning and baking methods. I’ve even been able to develop relationships with distributors to access higher quality ingredients,” she says.

What started as virtual communication transformed into real-world collaboration, as Russell discovered that established pizza makers were not only willing, but also excited about working together. She’s a fixture at pop-up pizza events produced by Nino Coniglio (Caputo Cup champion and Chopped winner). Years ago, it would have been unheard of for a pizzeria to welcome an outsider into their kitchen, but now it’s seen as an opportunity for both parties to improve. The concept of secret recipes doesn’t exist in the minds of modern pizza makers.

For those who grew up in the business, the decision to stray from the norm is a bit more difficult. Frank Tuttolomondo faced that very quandary at his family’s pizzeria on New York City’s Upper West Side. “It’s a generational thing,” he says of the changing pizza landscape. “(My parents’ generation) opened pizzerias to make money and feed their families. Now we can do it to make the food we want to make.” Frank tried changing the recipe at his family’s pizzeria (Mama’s) but customers revolted, so he left to open his own shop (Mama’s Too) one block away. Rather than be driven by what he knows will sell, Frank can follow his instincts to make the pizza he wants to make. Based on his recent New York Times review and the resulting lines out the door, it appears to be working.

On the technical side, new wave pizza makers are alike in their common obsession with dough. Peter Reinhart attributes this to the rise of the artisan baking industry. Before writing books like American Pie: My Search for the Perfect Pizza and Perfect Pan Pizza, Reinhart wrote (James Beard award winning) books about bread and taught bread baking at Johnson and Wales University.

“Bread bakers are making the same intuitive leap I did because pizza is bread, so better bread means better pizza,” he says of a clear pattern in the pizza industry.

Reinhart points out that the most dramatic evidence of the amalgamation of the bread industry into the pizza world was this year’s inclusion of the International Artisan Bakery Expo in the floor plan of the International Pizza Expo in Las Vegas. He also notes that several leaders of America’s current wave of pizza makers started in the bread world. Nancy Silverton (Pizzeria Mozza), Brian Spangler (Apizza Scholls), Audrey Kelly (Audrey Jane’s Pizza Garage), Ken Forkish (Ken’s Artisan Pizza), and Anthony Mangieri (Una Pizza Napoletana) all found their way into the business after first working with bread. Those who didn’t come from a bread baking background found their way to the same conclusion. Anthony Falco had no experience with bread or pizza before taking the lead on the pizza program at Roberta’s in Brooklyn. Now he consults for pizzerias across the planet, with his central policy being the encouragement of fermentation without use of commercial yeast.

If there’s one characteristic common among all new wave American pizza makers, it’s that they’re concerned with self-improvement. Whether sourcing better cheese, experimenting with new fermentation schedules or testing their pizza in an unfamiliar oven, the country’s most exciting pizza makers are not trying to make the best. They’re just trying to beat their last pie. And they’re taking their colleagues along for the ride as they do it.