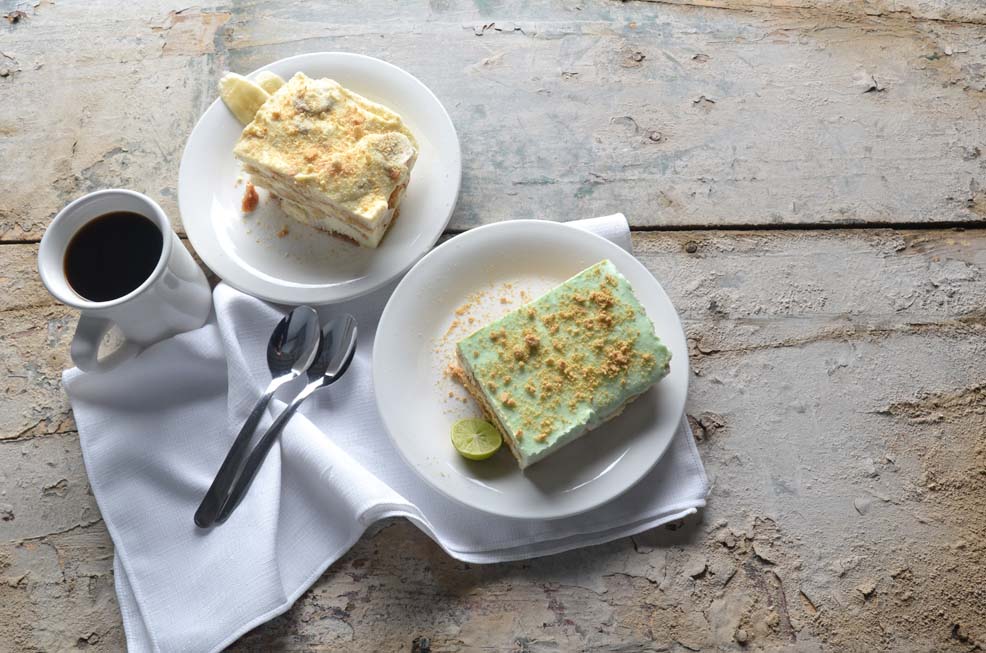 These non-traditional tiramisu recipes are anything but typical

“Pick me up!” Sure, that’s what your kids said when they were small, but it’s also the literal translation of tiramisu, because it gives you a “pick me up” from the coffee that is sweetened and soaked into the sponge cake or ladyfingers.

This smooth and creamy dessert is typically layered with a whipped cream and mascarpone cheese, coffee-soaked ladyfingers, sometimes with liquor and then topped with cocoa. Its popularity just continues to grow and is loved by many.

By the time our customers are done with their meal, they’re usually too full to consider dessert. The easiest selling point of tiramisu is that it is not heavy like most desserts. As a chef who loves to do as much in-house as possible, about seven years ago I began making all my own desserts. Although it’s not the traditional mascarpone cheese used in tiramisu, I experimented with using a super fine, super smooth ricotta. I immediately got rave reviews, so that’s how I’ve been making it ever since. Over the years, I’ve also come up with some of my own variations of this creamy concoction and they have all been a tremendous success.

Let me share how I make my version of tiramisu and then share the variations you’ll want to try and then even come up with your own innovations. This is probably the easiest recipe you’ll find, and there are no eggs in it which provides a safer dessert to serve.

First, whip together three quarts of heavy cream and one pound confectioners’ sugar. Fold in three pounds of super fine ricotta. As a stabilizer and my secret weapon, I then fold in three small boxes of instant white chocolate pudding mix. Your cream is now complete and ready to assemble.

I like to line my pan with parchment paper so it’s easy to pop out once it is frozen.

Brew one pot of coffee with double the amount of coffee grinds to give you a stronger batch of coffee, or brew about a dozen shots of espresso and mix the hot coffee with a quart of sugar. Whisk it until the sugar is dissolved. If you wish to add liquor, add it to your sweetened coffee.

Cover the soaked cookies with a layer of the cream mixture and then turn your pan 90 degrees and put a second layer of cookies in three rows covering the layer of cream. Soak the cookies in the exact same fashion as the first layer. Top the cookies with cream so it meets the top of your pan. You should have exactly enough cream to make three 9-inch-by-15-inch baking pans that are two inches tall.

Sprinkle cocoa over the top. Cover them with film wrap and freeze them. Once they are frozen, take them out of the pan and place each pan on a cutting board. Mark them first to get three-piece rows across by five-piece rows down and then cut them with a hot knife to give you a clean cut. You can plate them while frozen and let them thaw on the plate or in the container you will sell them in for the best presentation.

Now that you’ve got that all figured out, let me tell you how I’ve gone rogue and gotten creative with this very process. It started in the fall a couple of years ago when I had a pumpkin latte. To make the pumpkin latte tiramisu, I simply added a can of pumpkin, a tablespoon of cinnamon, tablespoon of ginger and two teaspoons of nutmeg to the regular cream mixture recipe. Then instead of the cocoa on top, I lightly sprinkled cinnamon on top. All other assembly procedures stay exactly the same. This dessert blows pumpkin cheesecake out of the water and, frankly, is easier to make.

Now, peanut butter and jelly tiramisu may be a bit of a stretch, but trust me when I say this is an attention grabber. “For the kid at heart” is the slogan I used to get all PB&J lovers to try this one. I thinned out some melba (raspberry) sauce and soaked the cookies with that and then incorporated some peanut butter into the regular cream mixture. I topped it with crushed peanuts instead of cocoa. Everything else remains the same.

Banana pudding is very popular in the South, so I made a banana pudding tiramisu. I used instant banana pudding instead of the white chocolate, incorporated some freshly sliced bananas to the cream mixture and replaced the ladyfingers with vanilla wafers. I used crushed wafers for the top.

Last but not least, key lime tiramisu is a unique twist on traditional tiramisu. I incorporate some key lime juice or extract to the cream and use three layers of graham crackers instead of soaked ladyfingers. Crushed graham crackers on top make it perfect.

Try them all. Your customers and your cash register will thank you!