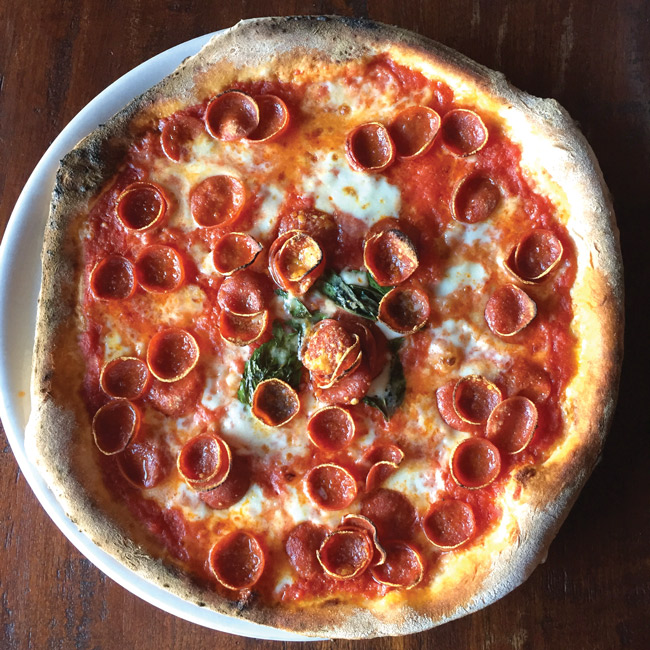 This is a true pepperoni story.

One night, six years ago, I received a call from an older customer saying that we made her pizza incorrectly. “You screwed it up! I ordered a plain pizza, and this doesn’t have pepperoni.”

“I’m sorry, ma’am,” I said pulling the phone back and looking at it like this call was a joke. “Aaaahh… what exactly did you order?” I pulled up her order which read “large cheese pizza.”

“I told him, I wanted a plain pizza! I know that plain pizzas always have pepperoni on them.”

“No ma’am, a pepperoni pizza has pepperoni on it…”

“Are you guys trying to scam me young man? Let me ask you this: If a plain pizza has cheese on it, it would be called a ‘cheese pizza.’ So why didn’t the order taker say ‘cheese pizza’ when he read the order back?”

“I don’t know ma’am,” I acquiesced. “I guess you’re right, we do in fact call plain pizzas ‘cheese pizzas’ most of the time. How ’bout I send you out a small pepperoni pizza for your trouble ma’am?”

“Well, that’s okay, but I still don’t know anyone who would order a pizza without pepperoni on it.”

Later that night, I realized that I had taught the woman that not every pizza had pepperoni on it. She taught me that pepperoni is so popular in America that a lot of folks think it should be on every pizza!

The history of pepperoni is vague. There is no cured meat called “pepperoni” in Italy. It is thought that the millions of Italian immigrants who landed here created this semi-spicy salami out of new-world ingredients. It could have been modeled on the Salame di Napoli, which is made with garlic, wine and chili. Or perhaps it’s based on the Salsiccia di Calabria, which has fennel, chilies, wine and garlic.

Here are some other sausages that seem very much like pepperoni:

While pepperoni is like a lot of salami, its beauty lies in the depth of flavor released when it is heated. The fat and spice content, along with the small circumference of each slice in modern pepperoni, react to heat unlike any larger salami. Almost all dry-cured, medium-fat salumi like soppressata, lonza, coppa, Calabrese, Prosciutto di Parma and cotechino tend to release more fat and flavor when you lay a thin slice on an oven-warmed pizza, but not under direct heat. Pepperoni’s inherent flavor concentration releases copious amounts of fatty flavor in high temperatures without burning the whole slice. There are some advantages that certain pepperoni types have above the others. Like all foods you buy for your customers, it all depends upon the price you are willing pay for quality.

There is a wide selection of pepperoni out there and I would rather stab a sharpened stick in my eye before I name names of good or bad pepperoni companies. Besides, it all depends upon the heating elements and your customers. Some fine natural casing pepperoni that looks gorgeous on a finished pie may turn some dieting customers off with the fat and may flame-up in a conveyor oven, leaving little carbonized cups guaranteed to get you that complaint call. On the other hand, a flacid, pink circle that has barely released any flavor is a giant “tell” that you, the operator, wanted a leaner pepperoni and less flavor enhancement.

I am not a salumi expert. But after 15 years in business, and many different pepperoni products, here are some deciding factors I’ve had to delve into before choosing a pepperoni:

It takes 50 to 55 38-millimeter slices to populate one of your 14-inch, large pizzas shoulder to shoulder. These slices weigh 3.25 ounces. Because this pepperoni is 16 cents an ounce, your food cost for the pepperoni alone is 52 cents. Let’s now broaden this costing to the whole pie: (Note: this is just a sample.)

If your pepperoni pizza costs $1.90 and you sell it for $8, your food cost percentage is 24 percent. This leaves you $6.10 to pay for labor, taxes, rent, insurance, marketing, fees –– and did I mention taxes?

The choice is yours!

In my pizzeria, the staff has an ongoing beauty contest — not for people, but for calzone and rolled pizza products. We’ve made this really cool variant of a stromboli and bread.