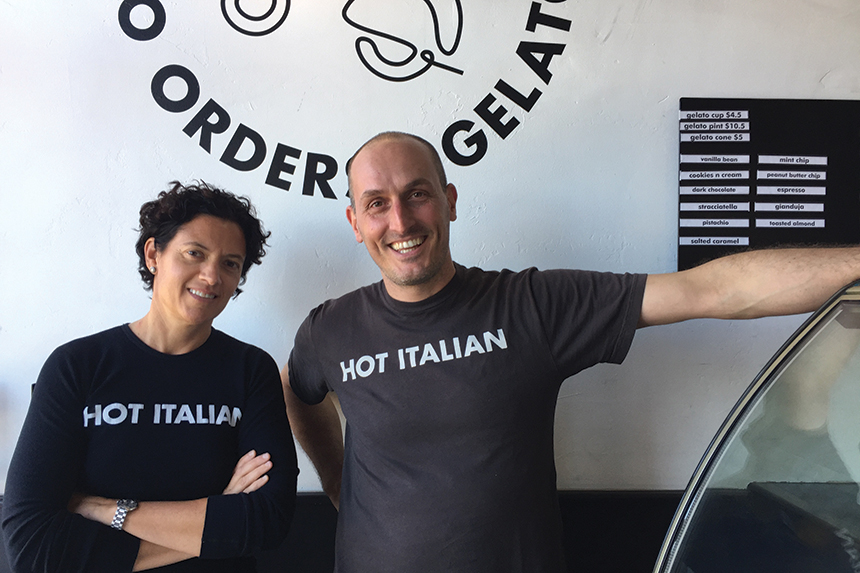 We visited California’s Hot Italian on a steamy fall day. It was past lunch, but the restaurant was full of folks downing Italian beer and eyeing one another’s pizzas. With high ceilings, a loud beat and décor that leaned toward Italian cycling, we knew we’d hit on a concept that we’d not yet seen before. The gorgeous food, clever styling and tight concept landed Hot Italian at number 40 on Pizza Today’s list of Hot 100 Independents.

Co-founders Andrea Lepore and Fabrizio Cercatore met through a mutual friend, a professional basketball player for a team for which Lepore did public relations. Cercatore owned a classic restaurant in Italy. The two struck up a friendship after both visited each other’s area.

“Fabrizio, being the constant entrepreneur, wanted to do something different,” Lepore says. He’d owned his restaurant at that time for 13 years and “I said, ‘We don’t have any good pizza in Sacramento, or at least not authentic Italian pizza.’ So (Cercatore) came over and looked at locations — and didn’t realize at the time that we were entering what was pretty much the worst economy ever.”

Instead of opening right away, the partners hunkered down and perfected their concept for a few years before Hot Italian opened in February 2009 in Sacramento. “Pizza, especially at the time, was so heavy,” Lepore says. “We wanted it to be modern. There weren’t many Italian places then, even in New York, that weren’t red-and-white tablecloths and tomato cans. Modern Italy is not like that. Modern Italy has amazing design and we really wanted to celebrate that.”

Pizza takes center stage at Hot Italian, accounting for up to 70 percent of food sales. “We wanted to make the pizza authentic, like I used to make in Italy,” Cercatore says. “There’s no change. We weren’t really concerned with what people wanted. People said, ‘Oh, you should have chili flakes or three different types of sides. Chicken, pineapple … all those things (weren’t) what we were used to making in Italy. The first goal was authenticity. That also means using fresh ingredients because that’s what we’re used to doing in Italy –– buying ingredients from the farmer’s market. That also keeps the pizza healthy, compared to what was here before, which made the pizza heavy to digest. There was pizza with a lot of cheese on top, and a lot of toppings.

“To keep it light, we proof (the dough) for 48 hours so it’s really light to digest. We also want to keep the balance of the toppings.”

Hot Italian uses a commissary method for its three stores, making dough fresh daily and then moving it to the units. “It’s for the consistency,” Cercatore says. “Everything else is prepared daily here in the stores. Like the vegetables, the salumi — (and) the sauce is (custom) made for us.”

“The combination of organic flour Fabrizio uses for the crust, the local produce and hand-picking all the meats and cheeses” sets Hot Italian apart, Lepore adds. Pizzas are baked in deck ovens at two of the three locations –– they are easier to manage as the company grows. The original Sacramento location burns wood.

The restaurant is LEED Certified, receiving national praise for its green initiatives, but it is also the only pizza brand to receive the REAL Certified Food Award from the United States Healthful Food Council. “I think that there’s this perception that pizza is junk food,” Lepore says. “It can be, if it’s bad cheese and bad flour and meats with lots of fat.”

The lighter pizza, communal tables and focus on upscale food put Hot Italian on the cutting edge of the dining scene in its infancy, but its concept was well received in California. “Pizza is a communal food. It’s meant to be eaten in groups,” Lepore says.

The company’s upscale offerings also include brunch pizzas on the weekends with ingredients like scrambled eggs, fig jam, fresh dill and smoked salmon, as well as full bar menus featuring housemade Bloody Marys and Italian mimosas served by the glass and pitcher.

Beer and wine account for the majority of alcohol sales with a heavy emphasis on Italian offerings.

The company’s second of three locations opened in March 2012. Sales topped out at more than $5 million last year, all stores are company owned and employ about 75 employees. Despite offers to open in suburban areas, “we wanted to grow the brand in urban areas first,” Lepore says.

How did they know they were ready for expansion?  “It’s like a machine,” Cercatore says. “When everything runs smoothly, and we see that with three locations everything is organized … when you see everything is running the right way.”

The urban, high-density areas in which Hot Italian stores are located are a big draw not only for other pizzerias, but other restaurants as well. “Competition is good. Competition keeps you motivated,” Cercatore says. “We pay attention to the quality (and) the consistency. We make our priority the customer. We make sure it’s a good experience. That’s our motivation from the first day we open.”

Hot Italian has a heavy social media presence, but their urban locale offers outdoor opportunities, taxi-top marketing (and) ads on city busses. “We do a lot of videos,” Lepore says, “and we try to translate the type of experience people have here.

“And you can’t always talk about yourself. A lot of places, that’s all they do constantly. Social media, you have to be on it constantly 24/7. You can’t fill it all with pizza photos or else people will move on to the next thing. You have to engage with people” to create a culture.

Owning her first restaurant, Lepore says she was surprised that the small things –– such as a simple package of napkins –– added up quickly. “The profit margins in restaurants aren’t the same as they are in most businesses,” she adds.

Other challenges include the high labor costs in California –– a common complaint from other operators we’ve visited in the state. “It just affects everything. It affects your food costs. It affects your expenses. I think, too, when you go into markets there’s always a demand for restaurants –– especially since retail is dying and going to online. So everyone’s trying to fill retail space with restaurants. And you can become oversaturated in markets where mixed-use projects, before they had a mixture of retail and restaurants, now there’s not that much retail.”

Moving forward, “we’ve really been expanding based on opportunity,” Lepore says, rather than growing simply for the sake of gaining numbers.

“We’re looking for high density and (places that are) walkable, bikeable,” she adds. “We’ve had a lot of interest from people who are looking at outdoor malls and those types of places.”

For those considering opening new restaurants, Cercatore advises that potential operators hone their concepts initially. “Invest first the money for legal advice and accounting,” he says. “Have everything already well organized and really plan and calculate their numbers.

“Pizza is a great food,” Cercatore says. “It makes everyone happy.”