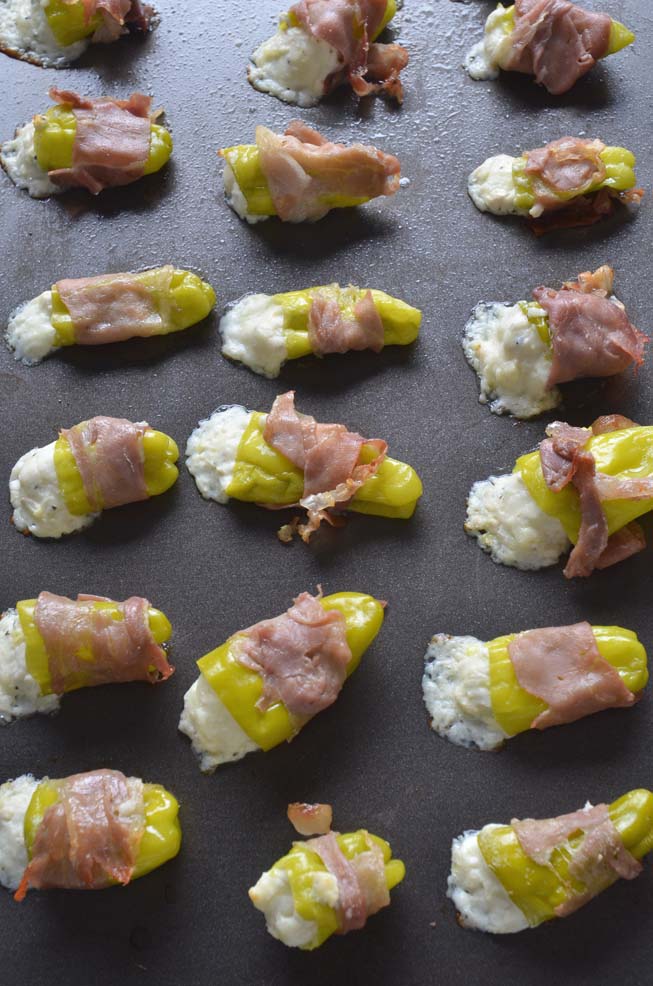 Pepperoncini come packing just a little heat and are used widely in Italian and Greek cuisine and accompany every pizza that Papa John’s and others serve to their patrons. Pepperoncini hail from Europe originally –– specifically, Italy and Greece have deep ties to this chili. They go by many names. The most common variation is pepperoncini, but the Italians also call it friggitello or a common general pepper name: peperone (not to be confused with the sausage pepperoni). In English, it’s often referred to as the Tuscan pepper, the golden Greek pepper, or the sweet Italian pepper.

I remember a dozen years ago when I started doing cooking demos at Pizza Expo, I would team up with the late, great Pat Bruno. He would always tell the crowd that you should never put a topping on a pizza that doesn’t end in a vowel. Of course that would coax attendees to think quickly and they’d start throwing out different pizza toppings that didn’t end in a vowel. Pat would immediately translate that topping to Italian and every challenge was met with the Italian version that ended in a vowel of course. Two examples are mushrooms –– “fungi” and peppers –– “peperone.” Working beside and with Pat was always the highlight of Pizza Expo for me!

Some say the Greek varieties of these peppers are sweeter and less bitter than the Italian varieties grown in Tuscany. Pepperoncini are mild with a slight heat and a hint of bitterness, and are commonly pickled and sold packaged in jars.

Pepperoncini grow on a bushy plant that reaches larger than two feet in height and produces sweet green peppers that also turn red when mature. Usually picked at two to three inches long, these bright green, wrinkled peppers taper to a blunt, lobed end. Sometimes they get confused with banana peppers, but they are a different pepper altogether. Pepperoncini have a much thinner wall and are a whole lot smaller in size.

They are typically used in sandwiches, salads, tossed salads served in pizzerias, antipasto salads and platters and on relish trays and as a garnish to lend dishes a crunchy texture and a salty taste. Pickled pepperoncini can vary in color from bright yellow to bright yellow-green. Sometimes coloring is added. Pepperoncini are sometimes briefly rinsed in cold water before serving to reduce the effects of the pickling brine on the taste.

So how hot are pepperoncini peppers? They barely nudge the pepper scale. They are right up there with the pimento pepper in terms of heat. They’ve got a heat that borders on a tang, especially when pickled. The pepperoncini (100 to 500 Scoville heat units) is much closer to a bell pepper than a jalapeño, which comes in on average 40 times hotter.

Everyone’s tolerance level to consuming spicy foods is different. I don’t mind a little spice in my food and pepperoncini is just about right for me. One of the things I love about pepperoncini is that although they are used and served mostly cold, they are totally fabulous hot as well.

I love to slice these little babies up and in the last 15 seconds of deep-frying an order of Calamari rings, I throw in some pepper rings. I toss them with the calamari then dust them all with Parmesan cheese not just for the appearance of it, but it also really does make an excellent accompaniment to the calamari with great eye appeal, and is a great counter balance to the subtle flavor of the calamari.

Heck, just slicing and breading some of these peppers, deep frying them and serving them by themselves with a side of marinara for dipping makes for an excellent appetizer.

Stuffing pepperoncini is a unique way to present these peppers both hot and cold. You’ve seen jumbo green olives stuffed with all kinds of fillings like almonds, feta cheese as well as bleu cheese and garlic cloves. I’ve enjoyed cherry peppers stuffed with prosciutto and provolone. Look at pepperoncini as that same culinary canvas as far as plucking the stem off, pulling out the seeds and stuffing them with your favorite ingredients.

Pluck the stem off the top of the pepper removing the seeds.

Fill the pepper with your cheese mixture and then wrap the pepper with either bacon or prosciutto and bake them. Since this pepper is so thin, I prefer the prosciutto, which doesn’t need to be in the oven as long. These could just take between five and 10 minutes to bake depending on how hot you run your oven.

A variation instead of wrapping them in bacon would be to bread them with a standard breading procedure (flour, egg then bread crumb) and deep-fry them.

It’s not easy to find these peppers fresh, but if you find a specialty Italian grocer or other high-end market you should be able to locate them. You can use them like any other green pepper sliced and served on salads or even sautéed with some onions and garlic and top your favorite burger or brats with them. You will mostly find them pickled, however, and that certainly adds to their shelf life like any other pickled product.

Don’t underestimate the power of this little pickled pepper. Customers love them included with their pizza as an extra little edible treat and not just as a garnish. If you’re going to start adding these to your pizzas or salads you do want to make sure you “pop” them, meaning squeeze the extra brine out that sometimes gets trapped in the pepper. Otherwise it will leak over your pizza or salad and make them soggy which we all know can lessen the experience.

Peter Piper had it right all these years. Who knows, maybe it’s because of that tongue twister that we’re attracted to these pickled peppers in the first place!