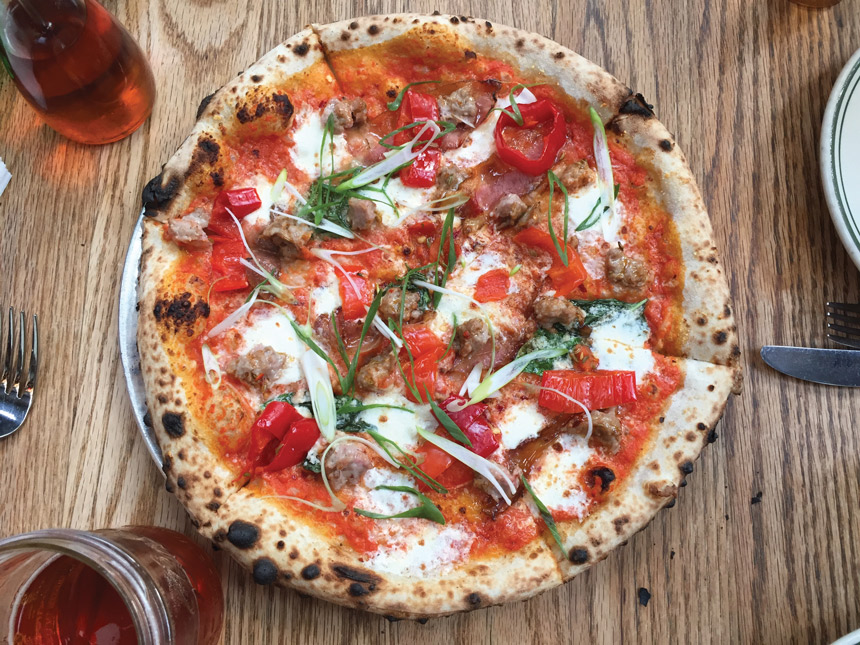 When pizza first became popular in the United States, it had already changed dramatically from its original southern Italian expression. Newly arrived immigrants couldn’t afford wood to fuel their ovens, so they switched to coal as a cheaper solution. Flour was too bulky to import and cheese too perishable, so they were sourced locally. It wasn’t until recently that the original pizza Napoletana finally found its place in the American restaurant market. Now that wood has become a viable fuel source, scores of pizzerias have opened featuring artisanal baking methods. Some have gone the route of traditional Neapolitan, driven by its rules and regulations, while others have modified the process to suit the tastes of their customers. This new adaptation goes by many monikers, including neo-Neapolitan, NEOpolitan, neo Classica and American Artisan style. Regardless of nomenclature, the style has carved out a niche in the American pizza market.

It’s easy to lump all personal-sized artisan pizzas into a single category, but seemingly small variations are often significant. Neapolitan pizza is rooted in historical methods, so its parameters are tightly controlled. Several organizations have formed over the past few decades to protect its definition. The Assoziazione Verace Pizza Napoletana, which formed to counter the growing threat of American fast food pizza, has certified 96 pizzerias in America based on compliance with a detailed list of regulations. Individual pizza makers can seek certification for their mastery of the style through another organization, called the Assoziazione Pizzaiuoli Napoletani, which requires direct training by representatives from the organization. The most official mark of recognition comes from the Official Journal of the European Union, which granted Pizza Napoletana name protection in 2010. Now pizzerias in the EU can identify their products with the acronym TSG (Traditional Specialty Guaranteed) if they follow a strict set of rules similar to those of the AVPN. (See sidebar for a summary of TSG guidelines.)

Ellie Olsen is certified by both the AVPN and APN and has herself certified dozens of pizza makers through her business, Wood Fired Oven Baker. “Neapolitan pizza became really sexy in the U.S.,” she says of the trend that inspired her to grow her business by importing and warehousing Italian ovens for Neapolitan pizzerias. But her clientele have changed over the past five years and now they’re coming to her with new concerns. “They tell me they appreciate and respect Neapolitan pizza and its tradition, but their communities don’t want it.”

The biggest problem customers have with Neapolitan pizza is a direct result of the style’s strict rules. Pizzas are required to bake at a high temperature (905 F) for an extremely short amount of time (60 to 90 seconds), so pizzas are often slightly wet in the center. This isn’t an issue in Naples, where each pizza is served uncut to a single person. The problems occur when these personal pies are cut into slices, which have trouble holding the weight and moisture of their toppings. There’s one thing Neapolitan pizza lacks that Americans love: stability.

Enter the NEOpolitan pizza. Customers “want (their pizza) to look Neapolitan, but they’re American, so they want crunch,” says Anthony Falco, former pizza czar at Roberta’s Pizza in Brooklyn. Their individual 12-inch pies are baked in a wood-fired oven with carefully selected toppings, but they do not conform to the demands of the Neapolitan playbook. “Everyone wants higher-quality products and better food experiences, but Neapolitan pizza doesn’t make sense to (all) Americans.” Falco describes the pizza at Roberta’s as “American pizza using Italian techniques.” If Neapolitan pizza is the springboard, NEOpolitan pizza is the landing pad.

NEOpolitan pizza makers use several methods to achieve a sturdier base, each of which violates the Neapolitan pizza code. One is blending traditional soft Italian flour with strong American flour. Roberta’s blends Caputo’s “00” Pizzeria flour with King Arthur’s Sir Galahad to achieve a crust that doesn’t flop.

Another method is baking pizzas for a longer time at a lower temperature than their Neapolitan counterparts. David Sheridan taught himself to bake pizza in a wood-fired oven he built in his Brooklyn backyard, but opted for an electric oven when he opened Wheated in 2012. “The texture I get from a three- to four-minute bake at 700 degrees is more dependable than the super-fast bake I was getting from the wood-fired oven,” says Sheridan, who prefers “not feeling chained by any tradition.”

Sales of medium-temp ovens indicate that America’s penchant for NEOpolitan pizza is clearly on the rise. Anthony Pilla, head of business development for oven company Marra Forni, says that gas-fired ovens accounted for 75 percent of the company’s sales last year. Lower temperature and easier operation make gas-fired a great tool for this user-friendly version of the Italian original.

“It can still be good, but it’s not Neapolitan,” says APN Americas president Roberto Caporuscio, of pizzas baked at temperatures lower than the Neapolitan requirements. The AVPN, on the other hand, recently added a special provision for gas-fired ovens to their certification options. Caporuscio also points out that the texture of a pizza’s base is not only

dependent on the time and temperature of the bake, but also on how the dough was handled. “Neapolitan pizza requires a soft and gentle stretch” to maintain gas retention in the dough. Aggressive methods like hand tossing and rolling pins result in a denser product, which may be preferable to some customers.

The terms NEOpolitan, neo-Neapolitan, American Artisan and neo Classica do not identify an intentional style, but describe a larger genre that’s distinct from Neapolitan pizza. In a sense, they employ the same adaptations that took place when pizza first came to the United States.