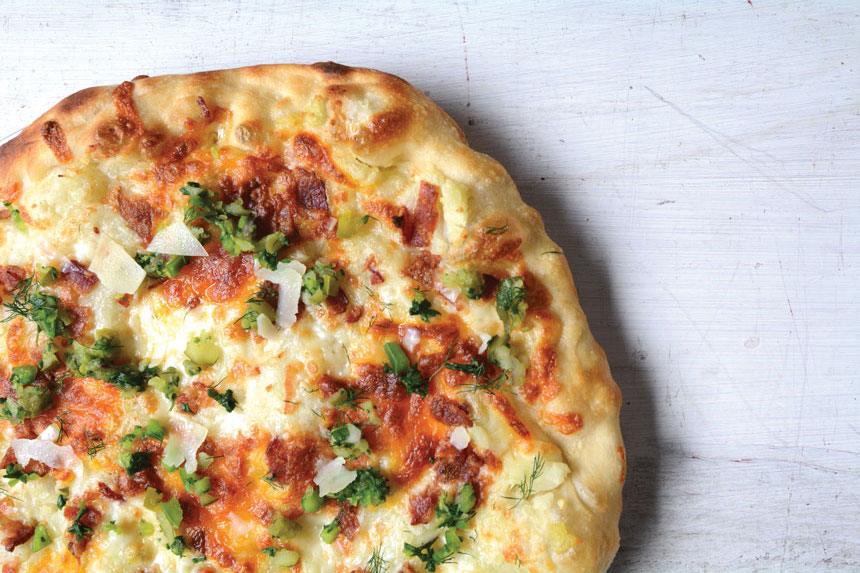 Mashed Potato Pizza with Salsa Verde This pie is a favorite of my customers and has all the elements of potato glory! Savory cheddar, bacon and mozzarella countered with the dilly-spice of salsa verde and spring onion crunch. Get the Mashed Potato Pizza at pizzatoday.com/recipes/pizzas/mashed-potato-pizza-with-salsa-verde

Mashed Potato Pizza with Salsa Verde This pie is a favorite of my customers and has all the elements of potato glory! Savory cheddar, bacon and mozzarella countered with the dilly-spice of salsa verde and spring onion crunch. Get the Mashed Potato Pizza at pizzatoday.com/recipes/pizzas/mashed-potato-pizza-with-salsa-verde

Mashed Potato Pizza with Salsa Verde
This pie is a favorite of my customers and has all the elements of potato glory! Savory cheddar, bacon and mozzarella countered with the dilly-spice of salsa verde and spring onion crunch.
Get the Mashed Potato Pizza at pizzatoday.com/recipes/pizzas/mashed-potato-pizza-with-salsa-verde

otatoes are like life; they never cease to amaze and confuse me. These orbs that grow nestled in mother earth’s embrace give sustenance to most humans on our little orb and follow only wheat and rice in the heavy-food-use hall of fame. Each year, I taste and use a lot of different potatoes from my farmer friends but every fall I get a new potato surprise to twist my small brain. Last year, the French had a hand in this spud lunacy.

Silence of the Yams

It was a mild autumn day as I drove up and down the quiet Southeast Ohio country roads to Jenkinson Farm. The owner, my friend Judy, had told me that she was growing a new type of potato that I would love. After showing me around her farm, she walked me past squawking Guinea hens to the side of a large hill where her potato patch was. She made a beeline to the black tubs the size of half whiskey barrels sitting on the side. “John, check this out,” Judy said smiling as she stabbed her fingers into the thick black mulch. I smiled at the big reveal expecting huge, life-changing spuds of gold to appear. I was shocked as she brought up a handful of oblong, marble-sized white orbs. “Behold, the La Ratte potato,” Judy said, adding, “It’s French and very expensive.” I kept the smile on my face and my disappointment well hidden. I purchased all the La Rattes, purples, yams and ground lamb, bid Judy farewell and skedaddled back to my pizzeria.

When I returned, I promptly boiled some of the La Ratte potatoes. Thinking they were overdone, I strained them and tossed them on a sheet pan with sea salt and extra virgin olive oil and walked away to mix dough. Five minutes later, my prep chef yelled back to me, “Oh my god, these are so freakin’ good.” I walked up to the potatoes and popped one in my mouth. Instead of being mushy, the outer rim of the La Ratte was semi-hard, almost crisp like a large potato Skittle. The overall dense and waxy interior bowled me over with buttery cream and nutty, hazelnut like taste. “This is a winner,” I muttered, feeling sorry that I doubted Judy but happy with my newfound spuds.

Potatoes originated in South America over 8000 years ago. Grown all over the world, they are rich in umami and most exhibit either a waxy, like russet or floury texture, like Yukons. Waxy potatoes tend to keep their shape when cooked and floury potatoes exhibit a soft, fluffy texture and tend to fall apart when cooked. Try to avoid potatoes with a green skin — this is caused by exposure to light or sun. Potatoes should be firm and not squishy and store them in a cool dark place. For my pizzeria, I like to use larger russet potatoes but also love the texture of Yukon Golds, Corolla and Red Bliss potatoes.

It’s Just the Way I Yam

Don’t forget the wonderful sweet potato renaissance that is occurring in this industry. Mashed, piped and baked, sweets are a great counterpoint to fatty meats like sausage, chorizo and bacon. The smaller yams and white, sweet potatoes are also very visually appealing with salty cheeses, like feta, gruyere and even blue cheeses. Finishing sweet potatoes off with maple syrup or spicy honey is a must in almost all situations and sweets also stand up well to sharp herbaceous greens like arugula, leaf mustard, kale and chard.

Potatoes are extremely versatile and perfect for any restaurant or pizzeria. Here are some accompanying toppings and flavors to enhance a potato experience:

You may think putting potatoes into your menu mix is a walk on the “Dark Side” but it is not a big, or expensive transition. I have had potatoes on my pizza menu for years — as an individual topping and on several specialty pizzas. We either buy locally in-season and easily roast the chopped pieces in our ovens or buy frozen IQF. I’ve found some great delicious international uses for potatoes in a pizzeria. Here are some great starring roles and quick recipes for the potato force to be with you:

Super Potato Pie: Using a food processor cutter with a thin cutting attachment, slice the potatoes into a lexan of water and salt mix. (The salinity should be that of sea water.) Let the slices sit in this salted water until limp, 15 minutes. Rinse under cold water to squeeze the starches out of the slices. Dry on a towel and place the slices into a large pan with extra virgin olive oil. Place into a pizza oven at 475F for eight minutes to just cook the slices. Cut, clean and finely chop one leek and roast in extra virgin olive oil until just limp, when cool, add to some béchamel, (white sauce) mixed with a small amount of ricotta and salt to taste. Spread the sauce thinly on a proprietary pizza dough then shingle the potato slices around the pizza. Throw a rope of extra virgin on the potato slices and bake in the oven at 475 for 10 to 12 minutes or until the bottom is well cooked and the dough is golden brown.

Purple Potato Gnocchi: How to and recipe