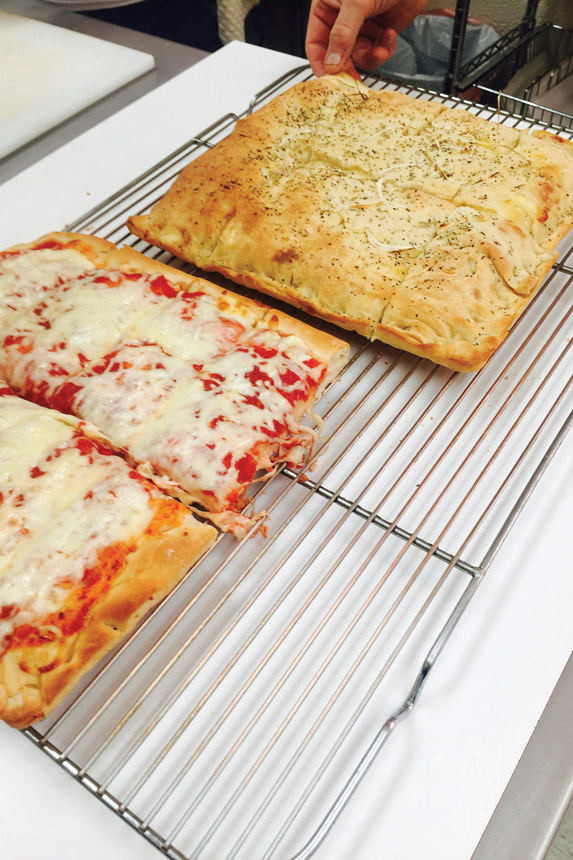 Last month I told you about my introduction to the little-known “Old Forge” style of pizza that originated in Pennsylvania. After my first stop at a homey establishment that really tempted my taste buds, we headed to a pizzeria called Arcaro & Gennell. Let me tell you — this place was also really amazing. The cheese combinations were different and so was the sauce. When we talked with the guys running the joint, Cosmo and Tony, they said all of the places in Old Forge are a little different despite the fact they all make the same style. It was cool to see, and everyone seemed very proud of their pizzeria.

The kitchen was great, and we shared stories with the two owners and talked pizza. This place was big and included outside bocce ball courts (which I loved). There is a special feeling in Old Forge. Is it the pizza? Well, it’s a style of pizza that isn’t too known or respected in our industry. Styles such as Detroit and St. Louis are becoming more popular and spreading across the U.S. Will this be the case for the future of Old Forge pizza? It could be, but you could never re-create the deep culture I feel in this town. Just being here and talking with the locals makes the experience that much better.

My experience with Old Forge pizza and the two pizzerias I spent some time in were great. The stories behind the owners made my trip that much better. One cooked in a gas brick oven at a low temperature, and the other in a conveyor. The sauces were on the sweeter side and distinct. I personally saw a variety of different cans of tomatoes in the kitchen. Cosmo told me that most of the Italians who immigrated to Old Forge came from Salerno. That’s in the Campania region. They mainly come from a town called Felitto, Italy, which is just south of Naples. I thought that was interesting because I filmed a show for the Food Network in Salerno years ago and tried the pizza there. It didn’t resemble the Old Forge pizza I had just eaten at all. The dough there is a little dense and soft, but not in a bad way. It’s very much like the bakery-style pizza that started more than 100 years ago, but with more toppings. The oil from the pan left a residual flavor in your mouth, but not in a bad way.  The type of oil they used in the pan in Old Forge varied. Some say they used a light peanut oil, while I saw others use vegetable and olive oil.

A lot of operators are trying to achieve holes in the structure (the cornicione) of the dough. Well, that’s the opposite for this style. Not all styles need to look like Swiss cheese in the middle of the crust with lots of holes. The dough expert in me would try to achieve more holes with higher hydration and less density. On the other hand, the purist in me understands that this is what it’s supposed to be, so don’t change it. Sometimes if you are trying to make something better it may take the authenticity away, and I don’t want to do that for this style. I get it, but if this style were to span across the U.S. I’m thinking not everyone may get it. Mostly because a lot of people in this business, or customers in general, don’t have an open mind. For me, you can’t compare regional styles to other regional styles. It’s apples and oranges.

Old Forge has pride, dedication and the people are hard working. It’s a blue collar pizza, and it’s delish!