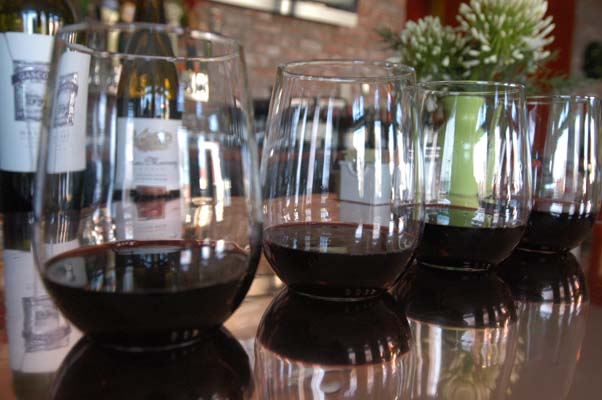 For many years Chianti has been called the wine of Italy. Well known for its original straw bottle, Chianti goes very well with pizza and pasta due to its light character and good acidity content. Other wines, such as Barberesco, Lambrusco or Gragnano, are also amazing and considered to be pizza wines — but Chianti always reminds me of that go-to wine during lunch or dinner.

After the 2014 World Pizza Championships in Italy, my wife and I decided to visit two very special wineries in the Chianti region. Rufino and Cecchi. Cecchi was founded in 1893. We had several different styles of Chianti. My favorite was the Chianti Classico Riserva di Famiglia, which has to be aged for at least two years before the release. The Riserva is a more structured and powerful kind of wine. It ages well, and the complexity and elegance are noticable. This, like all other Chiantis, pairs well with foods that are robust and have rich sauces.

Many ask about the straw bottle Chianti was famous for and the unusual shape which you tend not to see anymore. Two reasons: one was for transporting. Back in the day this protected the bottle from breaking, especially with horses going through steep terrain. The other was that many Italians would spray the bottles with cold water and the straw would keep the bottles cooler, especially in the warm summers of Tuscany.

We also visited the Ruffino winery. The Chianti produced here reminded me of my grandfather’s wine. The first sip I took instantly brought back memories of watching my grandfather drink wine at the dinner table. He would have a jug under the table and pour it himself. It brings you back to a time when things were so much simpler and less rushed. It was amazing. Here, Edoardo Torna, my wife and I engaged in similar stories of growing up with family dinners of pizza and pasta while sipping on Chianti.

The legend of the Black Rooster symbol that is on chianti bottles had always been a question I wanted answered. The Black Rooster has always been the symbol of the entire Chianti region. The origin of this is lost in time: an amusing legend narrates of the rivalry existing in the Middle Ages between Siena and Florence.

According to this legend, in order to cease their endless fighting, the two Tuscan cities decided to leave the definition of their respective boundaries to a remarkable feat between knights; they were to leave their hometowns at cockcrow and wherever they would have met each other, that exact spot would have been the border between the two republics.

For this purpose, the citizens of Siena raised a beautiful white rooster, which grew big and fat. The Florentines, instead, chose a black rooster and never fed him, so that on the fateful day he was so famished, he started to crow even before sunrise. As a result, the Florentine knight was able to set out very early in the morning. He met the knight from Siena in Fonterutoli — merely twelve Kilometers from Siena — as the latter had left much later. This is the reason why almost all of the Chianti territory was united under the rule of the Florentine Republic.

Even if this is merely fictional, it is confirmed that the Black Rooster profile has represented the emblem of the historic Chianti League, which ruled over these lands since the beginning of the 14th century. The artist Giorgio Vasari painted the Black Rooster on the ceiling of the Salone dei Cinquecento in Palazzo Vecchio, as an allegorical representation of the Chianti region. The Consortium has ultimately selected this seven-century old symbol as a certification of its wines.

Like many Italian products, there’s so much history behind Chianti. You can never go wrong by serving it.