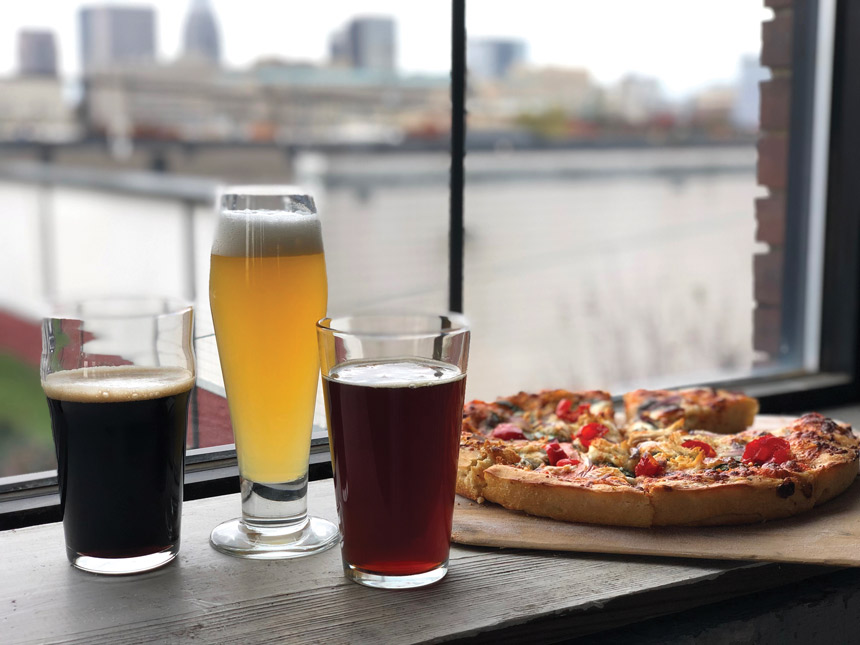 Technically, winter warmers are a category of beer, but there’s no doubt that beer enthusiasts are looking for dark, richer and boozier beers when the weather turns cold.

“In terms of general trends, as the weather gets cooler, people often shift towards beers that are a little bit darker,” says Master Cicerone Pat Fahey with Chicago-based Cicerone Certification Program. “I feel like you see a lot more brown ale, a lot more porter, more stout being brewed and consumed in the colder months of the year.”

Pizzerias specifically also see beer styles shift. “Winter is a time for dark, malty, ‘roasty’ beers,” says Bar Manager Beth Joyce at Woody’s Wood Fired Pizza in Golden, Colorado — “sometimes with some sweetness, like in a vanilla or graham cracker porter, other times with a hit of winter spice, or coffee and bitter chocolate notes.”

Russ Yeager, co-owner at Old Town Pizza in Auburn, California, rotates the beer list for the three-unit operation. “Barrel Aged options, Imperial Stout, Imperial Porter and Winter Warmers will get more love than they get in the hot Northern California summer,” he says.

While dark and high ABV beers add variety to a beer menu, Fahey warns that filling your beer taps with them may not be the best strategy for beer sales. Those high octane beers may not balance well with pizza. “If you are working with a food-focused place I would push towards lower alcohol beers, 4.5 to six percent, even 7.5 percent,” he says, advocating a balanced list.

When you have limited draft space, Fahey says, “that is something I’d do in bottles because as long as you store them well those beers are going to hold up well over time and potentially develop interesting flavors as they age. Then you won’t have any slow moving high alcohol beer tying up a draft line.”

Here are a few styles to consider this winter:

• Stouts and Porters. While these rich dark beers are a tough sell in the warm months, stouts and porters shine in colder weather. There’s a lot of debate in the beer community about what separates a stout from a porter. Both are dark and toasty. Originally, porters were brewed with malt, while stouts used roasted barley. But today’s porters and stouts have varied. Now, stouts have a reputation of being a stronger versions of porters.

“In the context of a pizza place, I do think that dark beers can work very well — but stick to ones that are on the lower end of the alcohol and body spectrum, things like Irish Stout or American Porter,” Fahey says.

Jonathan Cutler, brewer at Piece Brewery and Pizzeria in Chicago, sees a steady stream of dark beer sales, but lower as compared to its IPAs. “Our stouts and porters will be good sellers for stouts and porters for us, but we’ll never have a No. 1 selling stout here,” he says.

• Winter Warmers. These are malty ales, ranging from red to black in color and are more balanced in the hop bitterness. Spiced seasonal ales tend to fall into this category, often labeled as Winter, Christmas or Holiday ales. These typically have cinnamon, nutmeg, allspice, clove or other seasonal spices and sugars, like maple syrup, honey, plums, cherries, pumpkins, etc. “A nice spicy winter warmer will be on deck to bring us into the holiday season,” says Beth Joyce, Bar Manager at Woody’s Wood Fired Pizza in Golden, Colorado. “How long they last depends on how much people like them!”

Fahey says to beware of how many kegs you buy of Winter Warmers. While the beers are very festive and taste delicious, “It’s the kind of thing that I feel like there’s enthusiasm for them, but not a super sustained enthusiasm,” he says. He suggests trying one or two out and creating special events — as part of tap takeovers or food pairings — to see how they sell.

Yeager agrees. “I have a soft spot for some yearly seasonal beers that I’m sure will make an appearance in the locations,” he says, adding that Old Town will go through multiple kegs of a popular hop-forward seasonal beer, while others will be one and done.

• Red and Brown Ales. “Brown ales, whether they be American or English brown ales, are things that tend to work very well with food, probably fit very well with pizza and are kind of like warm and comforting this time of year,” Fahey says.

• Other dark varieties. “When it gets cooler out, we’ll bring out the Dark and Curvy, which is a Dunkelweizen (a German dark wheat),” says Jonathan Cutler, of Piece’s brew list. “That goes well with a meat lover’s pizza. Other dark styles that do fit that sessionable category are things like Schwartz beer. It’s a traditional German dark lager.”

There are a few tried-and-trues that typically do well on pizzeria winter beer menus. IPAs are always in season and are a No. 1 seller in many restaurants. Lagers and pilsners are popular and pair well with your pizza menu.

Jon Bortles, Woody’s owner, says the pizzeria will continue its craft cider line, which adds both variety and a gluten free option.

One hot trend this year that shows no signs of slowing in the colder months are hazy IPAs.

Every market is different. You may have to adjust based on local tastes. Brewpubs with long beer menus can play with a variety of rare and seasonal beers. If taps are limited, you have to be more selective about what you rotate in the winter.

“With the explosive array of different styles in the craft beer industry, it’s easy to want to try a little bit of everything out there, but it is very important to provide our customers what they want in a way that complements our menu,” Joyce says of Woody’s diverse beer menu. “The last thing we want to do is to put something on tap that is so far ‘out of the box’ that it just does not sell; or even worse, we end up pulling it off because nobody likes it!”

Piece brews a line of award-winning craft beers and also carries an array of guest taps. “You want to try and cater to all people,” Cutler says. “Really kind of look at your sales. What’s selling more? For the brewing side of it, we’re going to have something light, something dark, something with wheat, we’re going to have some hoppy beers and then some seasonals coming in. For an operator, I would think to do the same kind of thing.”