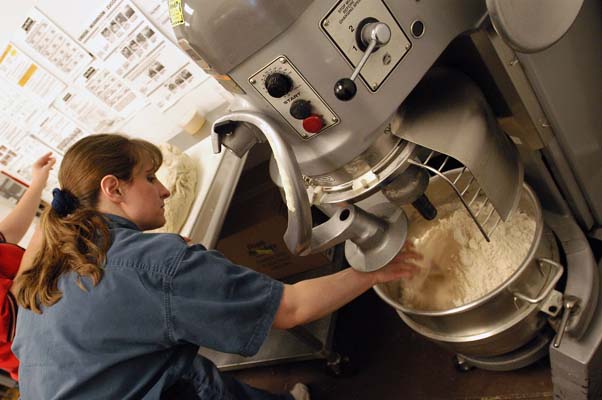 Q: Between instant dry yeast (IDY), active dry yeast (ADY) and compressed yeast (CY), which one provides the best flavor to the crust and why?

A: This question has come up many times over the years. Back in the early 1980s I did a comprehensive study on the three different yeast types in both bread and pizza crust systems to see what differences might actually exist both in the dough and in the finished product. The findings from those tests showed no significant differences. However, we still yielded some interesting findings.

Our tests were developed with the fresh compressed yeast as the control since it was the most widely used type of yeast at the time. The levels of both ADY and IDY were adjusted to give the same fermentation performance as the CY. We found that the substitution level recommended for ADY was correct at half of the CY level, but the IDY, when used at the recommended replacement level (one-third of the CY level), was a bit lower than what was needed to actually replace the performance of the CY.

We adjusted the IDY level to 0.375 percent as opposed to 0.333 percent and got a comparable level of performance. With the correct replacement levels now determined we were able to conduct the baking performance tests. We found that the CY was a good, solid performer so long as the yeast was from fresh inventory. As the CY aged from less than a week old to 10 days old (after receipt), we noted that the rate of fermentation began to slow down, resulting in less fermentation within a given period of time. By 10 days of age, the CY was fermenting almost eight percent slower than it was when we first started using it at two days of age. We did not observe any differences in dough handling properties or finished product quality as a result of the slower fermentation rate so long as we compensated by allowing the dough to ferment eight percent longer, or proof/rise for almost five minutes longer at 10 days of age than at two days of age. With regard to the finished product flavor and aroma we were not able to distinguish any differences in flavor of products made with two-day-old CY yeast or 10-day-old CY yeast.

We then looked at ADY and when used at half of the CY level/amount and hydrated in 100 F/37.7 C water for 10 minutes before addition to the dough, we initially got performance that was the equal of two-day-old CY — and by the 10th day it was fermenting only slightly slower than the two-day-old CY. This would indicate that CY might be a better choice if the same package of yeast will be used over roughly a two-week period of time. But when we went back to confirm our findings we found that the dough made with the ADY was now softer, and more extensible than the dough made with CY at all stages.

This was totally unexpected at the time, so we repeated the tests several more times with different lots of ADY. We found that there appears to be some inconsistencies in performance of the ADY from lot to lot with regard to both fermentation and dough consistency. While not considered extreme, these differences were still detectable and could be observed in the finished dough and product quality. When we evaluated the flavor and aroma characteristics of the finished products even between different lots of ADY we did not find any discernible differences.

When we tested the IDY we used both pre-hydrated and dry formats. With pre-hydrated we found that it was more sensitive to the temperature of the water that it was hydrated in than ADY was. When the ADY was rehydrated in water 5 F lower than recommended, the fermentation performance dropped off by five to 10 percent. And when the temperature of the water exceeded the maximum 110 F hydration temperature by 5 F, the drop off was just under an average of five percent in performance. But when the same yeast was added to the dough in the dry form (dry blended into the flour) the performance of the IDY was extremely consistent with essentially no change in fermentation performance noted over the 10-day test period. The doughs and finished products were also extremely uniform and predictable in performance throughout the entire test. When pre-hydrated in water at between 95 F and 110 F (35 to 40.5 C), the performance of the IDY was about on par with that of ADY but without the lot-to-lot variations experienced with the ADY. In this regard, IDY was extremely uniform from lot to lot. The flavor and aroma of the baked products made with IDY were judged as indistinguishable from that of products made from either CY or ADY.

While this research underscores the subtle differences in the three yeast types, it doesn’t explain why differences in flavor have been reported by users. To investigate this we subjected the three different yeast types to abuse in use as they might be subjected to in the real world existing in a bakery or pizzeria. We rehydrated them at extremes in temperature outside of their recommended ranges and used them in ways not recommended by the manufacturers. For example, IDY and ADY were rehydrated in water from 80 F to as high as 125 F, and CY was suspended in the same water temperatures to see what differences might arise.

We then subjected opened packages of IDY and ADY as well as CY storage of 30 days under refrigeration to see what might happen. What we found probably explains the differences in reported performance between the different yeast types. CY performed very well when suspended on 80 F water while IDY and ADY both performed sub-par. The differences at 125 F were not as pronounced, but again, the CY appeared to be a little better performing than the ADY or IDY.

When opened bags of ADY and IDY were refrigerated for 30 days prior to testing the IDY performed better than the ADY yeast. While there were little differences in the flavor and aroma of baked products from these tests, the real eye opening change occurred when the different yeast types were put into the 125 F water. In this case some off flavors and aromas were detected with both the IDY and the ADY but the CY sample retained a more normal flavor and aroma profile. Our conclusion from all of this testing was that when used within their design parameters, all three yeast types perform on par to each other in all aspects of dough and baked product quality. But when added to hot water the yeast destruction appeared to be great enough to result in loss of fermentation with both the IDY and ADY yeast types, while the CY continued to perform reasonably well. The moral of this story is to make sure you check the temperature of the water before you add any type of dry yeast to it if you want to get optimum performance from your dough and the best finished/baked product flavor and aroma characteristics.