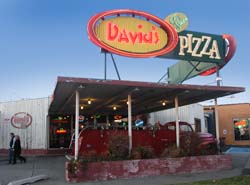 Exterior: Putting Up A Facade

Exterior: Putting Up A Facade

Magic occurs when the wall between you and your customers disappears. That’s the slight-of-hand trick used by architect Ed Shriver for a perfect building façade. Shriver is principal at Strada LLC, an architectural firm in Pittsburgh, Pennsylvania. “The best restaurant facades I’ve ever seen open up the wall, and the restaurant spills out on the sidewalk. People are walking by, pizza is on the table, drinks are in hand, and as you’re walking past and seeing that, you think to yourself, ‘That looks like a good place to eat!’ ” Shriver says. Your building façade, your calling card to the world, can dramatically affect foot traffic. It’s all about creating a warm and inviting entrance, Shriver says. And it’s doable, whether you’re in a strip mall or a historic structure, whether you have $1 million to spend or just $2,500, he adds. Here’s how to determine the best façade to fit your restaurant’s personality and how much to pay for it:

Analyze the customers’ vantage point.Before you begin your project, put yourself in the customers’ shoes. Figure out how they see your building as they approach it. “It’s different if you’re on Main Street and people are walking up and down the sidewalk than if in you’re in the Moon Township Plaza, and people are driving through a parking lot to your place. If they’re driving or coming fast at you, they have less time to look at the building. You need something that reaches out. A giant pizza slice hanging off the side of the building is great for car traffic. Everyone knows what it means,” Shriver says. Next, decide why they’re coming to your pizzeria. Is it for a quick takeout pickup, or for a sit-down meal? “If your place is on my speed dial cell phone for delivery, don’t spend your money on the façade. Spend it on a GPS system for your delivery guys instead,” Shriver advises.

Make the most of your building structure. Strip mall locations require different approaches than historic former homes or stand-alone commercial buildings. Normally, large windows frame strip mall restaurants, “so breaking down the barrier is no big deal,” Shriver says. However, realize that because of the window, your customers are focusing on the interior, not the façade. “Does it look like a dump from the parking lot?” he says. “There’s a pizza place in my neighborhood that’s roughly the size of a powder room, and from the entrance, you can see everything. It’s an appetite killer. I don’t want to know how the pizza is made in all the gory details. Show me a painting of Venice on your wall. Give it a little bit of theater. It is literally theater, and you affect the emotions of people coming to the store.” With a historic home-turned-restaurant or earlier-century building, work with the building’s original components. “There is great architectural detailing that you can’t buy today,” Shriver says. “The first thing you have to do is clean it up. You want it to look old but fresh. It’s okay if the building is 75 years old as long as it looks clean and well-maintained.” Are you in a commercial stand-alone building? Then concentrate on making your restaurant uniquely stand out. Signage is part of that, and “awnings are great,” Shriver says. “Some of it is logical stuff, like making it open and inviting. One big mistake I see in older or less-affluent neighborhoods is that they’re so afraid of getting robbed that you can’t tell that the place is open. They put glass block in the window. You can’t see in, and there’s a solid wood door with a tiny window, and you go into a tiny vestibule, which is dark, and when you finally get inside, you ask, ‘Do I need the secret password?’ This is not welcoming.”

Drill down into the numbers on cost estimates. The difference between bids on your façade project comes down to clarity on what you want. Don’t “buy” an architect or a contractor based just on fee, Shriver says. You have to understand the reasons behind their project bid. Suppose you put out a bid for a project, and one architect says he can do it for $12,000, another says $16,000 and a third says $30,000. Call the high bidder and ask why he’s so high. He may explain that his estimate is derived from your drawing and the cost of building materials. Then call the architect who bid $12,000 and ask why his bid was so low. “He may say, ‘I get a deal from my brother-in-law who sells storefront materials.’ You may say, ‘I want to do what’s on my drawing,’ and he may say, ‘Well, that’s expensive.’ Make sure you’re talking apples to apples,” Shriver advises. You can determine if an architect’s style meshes with yours simply by looking at their portfolio online. Get recommendations from other restaurant owners, too. Seek out licensed architects via your state’s Bureau of Professional Affairs (usually found through a state Department of Labor). And if they are members of The American Institute of Architects, that means they fulfill additional continuing education requirements. For those in your area, see www.aia.org.

What if you’re on a tight budget, but your façade still needs a facelift? Shriver recommends three things that will cost less than $2,500: Assuming you have window visibility to start, spend the money on the inside first. “You want a good attractive paint job –– warm colors, like reds and golds –– so that at night, your restaurant is going to glow. There’s a reason they call them picture windows, not because of the view out but the view in. Think of it as a frame around the picture of the inside of your store,” Shriver says. Next, look at some type of awning or a blade sign that sticks out perpendicular to the wall or sidewalk. Lastly, look at the door itself. “If you’ve got a nice vestibule that’s easy to get through and has good visibility, that’s great. A nice glass door or vestibule will make sure the entrance is inviting.” u

Heidi L. Russell specializes in writing about the issues that affect small business owners. She is a regular contributor to Pizza Today and lives in Wilmore, Kentucky.