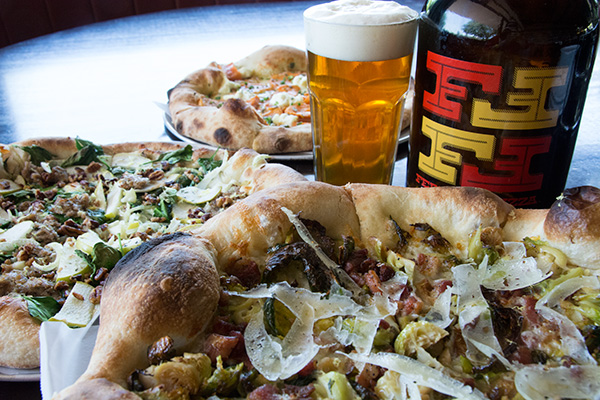 Place — its physical environment, setting and surroundings — has inspired this young, flourishing pizzeria in the heart of North Central Phoenix, Arizona. Federal Pizza’s building and its neighborhood are its pulse and they center on its artisan pizza that offers unique, robust flavor combinations.

More than a renovated commercial building, Federal has brought life back into an area landmark by renowned modernist architect Alfred Newman Beadle. His mid-century style shines throughout the pizzeria, from its glassed geometric symmetry and flat-roofed exterior to the clean lines and open space in its interior.

Originally the First Federal Savings & Loan, the location was most recently a call center. Enter Upward Projects, a group of restaurateurs who created Federal Pizza, and their dedication to stay true to the building’s historical significance, while also creating a comfortable pizzeria for its neighborhood.

Pizza Today dropped in at Federal Pizza to tour the restaurant and sit down with Upward Projects partner Lauren Bailey earlier this summer. The wood-fired pizzeria, which opened in the fall of 2012, is the third restaurant in the North Central District developed by Upward Projects and its founding partners Bailey, husband Wyatt and Craig and Kris DeMarco. “This was really the jewel in the crown in my mind because it is a historic Al Beadle building,” Bailey says.

Subtle mid-century touches dot the interior’s furniture and fixtures. The space is open yet comfortable; modern yet warm. A large expo kitchen stretches along one side of the deep, narrow restaurant and a 30-foot long, butcher-block bar flanks the opposite wall. Three sides of the restaurant feature glass and natural light beams down through skylights in its kitchen. Booths line the center of the restaurant with a highly requested eight-seat bar providing an up-close view of the make line and the wood and gas combination oven. Its shaded patio brings its seat total to 130.

The pinnacle of the old bank was its teller lane, which has been repurposed as Federal’s carryout drive-thru operationand now accounts for 20 percent of the pizzeria’s business. A temperature-controlled warmer, strict pick-up times and a pizza designed for carryout ensure a quality artisan pizza to go.

Customers are immediately drawn to the larger-than-average combination wood- and gas-fired oven with an opening almost as wide as the unit itself. “When we planned to do the drive-thru, we knew we were going to put a lot of pizzas through there,” Bailey says, as many as 500 pizzas in a four-hour period on Friday nights. “We love this because you get the flavor of the wood fire. The gas that is on the left-hand side and what’s underneath keeps the temperature really consistent so we can turn out that many pizzas so quickly.”

The pizzeria was sparked in part by neighborhood demand. Upwards Projects has created a centermost locally owned dining district with unique restaurants along Central Avenue that integrates its four neighboring historic communities that make up the North Central District, which is the city’s oldest section. Upward Projects sought out its established neighborhood base to see what they wanted. Overwhelmingly, Bailey says the answer was a pizzeria. Neighborhood involvement was key to every step of the building process and continues to be the pizzeria’s core customer base.

Federal’s culture is the No. 1 focus, Bailey says. “It’s a people-building company,” she adds. There’s no uniform for Federal’s 60 employees. “We really believe in the individualism and highlight that rather than telling them exactly what to say or do.”

It’s a tough job to get, Bailey warns. Candidates go through a minimum of eight interviews and an introductory period. “We swing hard and it’s really fun to work here, but we also have really high standards,” she says, adding that the culture also includes light-hearted pranking.

Team-building is the core of its employee strategies. Tips are shared and management has instituted exercises to cultivate a team-centric environment. During Pizza Today’s visit, the lunch shift started their day outside, split into partners and racing to carry fruit together without using their hands. An energizing experience, they were all smiles when they re-entered the restaurant.

Federal’s customers also get to know its employees through its MVP and staff profiles on its blog and social media.

Some of the best ideas in the company, Bailey says, have come from its employees through an anonymous e-mail address that goes directly to the Upward Projects executive team.

Upward Projects enlisted the help of master bread maker MJ Coe to create Federal’s dough recipe. There was a certain characteristic, Bailey says, that they were looking for in the finished pizza crust. “We wanted something that when you picked up the pizza all of the stuff didn’t fall off it,” she says. “Because we knew so many people would take it to go, we wanted to engineer the dough to be able to travel, as well.”

The end result is a light, airy crust — a balance crispy and chewy. Federal’s pizza has more body than a Neapolitan pizza, Bailey says, adding that the pizzeria wanted to differentiate itself as more artisan, rather than Neapolitan.

In addition to the 12 regularly featured pizzas, there is also the Chef’s Whim, which gives Federal’s culinary team a chance to get creative in the kitchen in a collaborative and even competitive way.

“We are a scratch company,” Bailey says. “We wanted that to be cornerstone to what we do.” Mozzarella is hand-pulled each morning.

Federal’s menu is balanced with appetizers, salads, sandwiches and pasta that caters to its diverse clientele. Unique offerings like the F&A Veg Board and Mussels have quickly gained favor. The veg board features wood-roasted cauliflower, fennel, carrots, broccolini, fingerling potatoes and Romesco ($12). The mussels with locally made chorizo, white wine broth and crostini ($12) were added to the menu this year and have quickly become a menu standout.

Beer and wine are strong fixtures in the operation, driving nearly 40 percent of its business. Federal holds a special license that allows for the carryout of beer and wine with a few technical rules that apply towards its 64-ounce growlers and 32-ounce “chubs”, as well as particular drive-thru procedures.

Federal’s 12 taps provide an eclectic mix of craft beers that are rotated regularly, along with eight wines by the glass and a list of wines by bottle.

As Federal settles into its place in the Phoenix pizza landscape, Bailey and Newstrom look to continually evolve the restaurant’s menu by expanding its pasta program, incorporating more Italian entrees and adding a lunch-focused menu.